My crazy "Sex and the City" finale theory 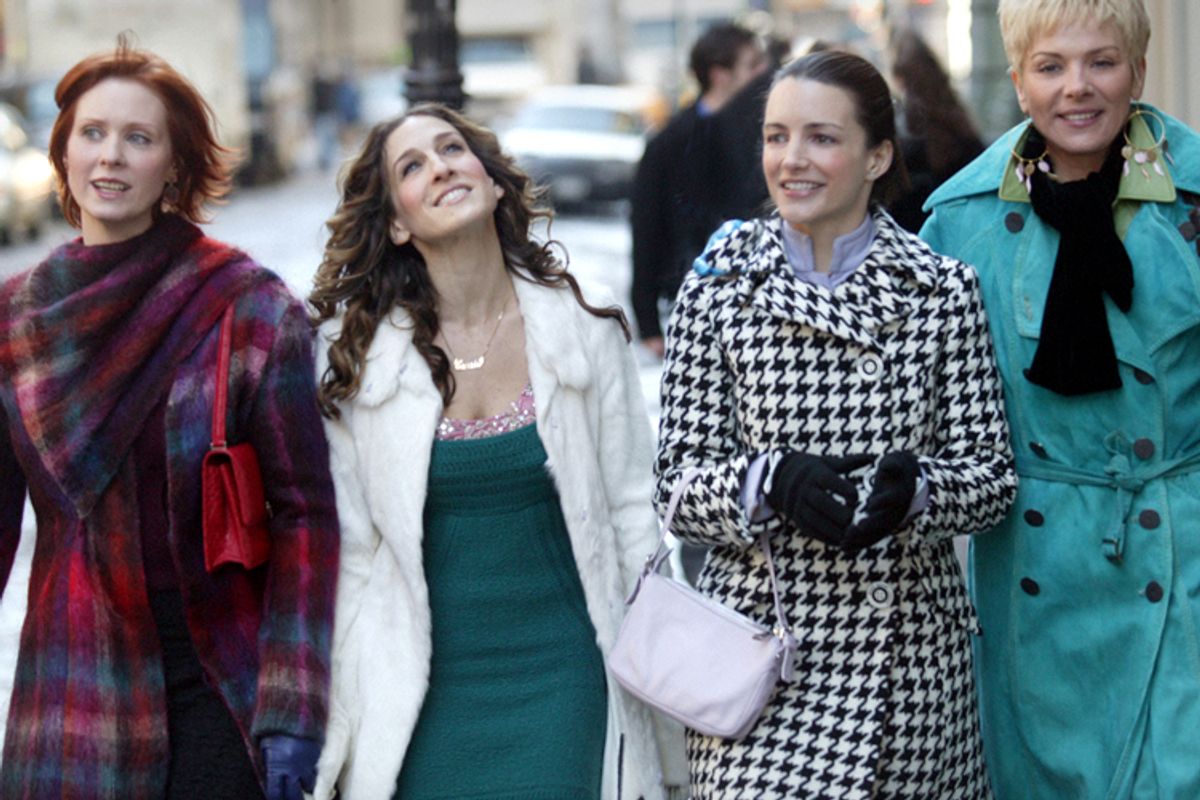 In the sort of conversations that start up every time a big show goes off-air, about finales that satisfy and those that don't, a third sort gets left entirely aside. Maybe that's because it's such a slippery concept -- there are finales that don't satisfy but can be made to through a reading counter to the one the authors intend. In the case of "Breaking Bad," for instance, Walter White can come to be read as a figure of deep and abiding, if conditional, love.

You can do it with less serious shows, too; it's how I've come to terms with the end of "Sex and the City," by reading it as a metafictional text.

Nearly 10 years ago, in February 2004, “Sex and the City” aired its final episode. It was an episode that, in its final moments, didn’t just subvert the six seasons that had come before but seemed to repudiate them. At the end of the journey, all four women who’d found satisfaction in friendships, in work, in casual sex and, yes, in shopping were paired off with a monogamous life partner -- even Samantha, whose gleeful pursuit of no-strings sex was among the show’s most popular elements.

The end of “Sex and the City” is almost bizarre in the degree to which it indulges a viewer’s wishes for the characters over the realities of the show, in which love is difficult and finding the right partner is arduous, and over the stated desires of at least one of the show’s four lead characters. In a generally quite positive reappraisal of the series in the New Yorker this year, Emily Nussbaum wrote:

In the final round, “Sex and the City” pulled its punches, and let Big rescue Carrie. It honored the wishes of its heroine, and at least half of the audience, and it gave us a very memorable dress, too. But it also showed a failure of nerve, an inability of the writers to imagine, or to trust themselves to portray, any other kind of ending — happy or not.

But there’s another explanation -- a far less likely one, but one that cuts to the very heart of just how difficult life had been for Carrie Bradshaw before her final rescue by Big. I cannot know whether this is what the writers intended -- indeed, I highly doubt it, but I am judging the work on its own terms and not by authorial intent. I believe that, even within the world of the show, nothing depicted actually happened. The show’s protagonist, the writer Carrie Bradshaw, wrote herself three best friends and an ultimately heroic lover. She is, finally, alone.

For the purposes of this argument, I am going to leave entirely aside the two “Sex and the City” movies, which, while more fun than you remember, exist outside the timeline depicted on the show and were created solely to fulfill the desire of the market. Consider them ancillary works, or fan fiction created by one of the show’s own writers.

Within the world of “Sex and the City,” the television show, Carrie Bradshaw is quite a famous writer, one who’s constantly stopped by fans, who walks red carpets, who publishes a book of her musings and goes on tour. Toward the end of the series, she appears at the New York Stock Exchange as a visiting celebrity to ring the opening bell. And we hear her writing when she speaks to us in voice-over -- those famous “couldn’t help but wonder” snippets punctuated by the sight of a blinking cursor.

But Carrie also narrates the adventures of her friends, who seem unaware they’re being written about; in one episode, Carrie declaims to them about her difficulties finding topics and they all sympathize; Miranda allows that she reads the column every week. If Carrie were actually writing about the sex lives of a successful lawyer, gallerist and publicist, using their real first names -- as her describing every element of their sex lives in the same voice-over she uses to read us her boilerplate column ledes and kickers -- wouldn’t they, in real life, have a problem with this? But they never bring it up. They’re the perfect subjects.

Let’s jump forward to the final scene of the series, which reveals that everything that comes before has been an elaborate fiction. Carrie is returning from an ill-fated sojourn to Paris with a lover, having left behind her friends rather blithely. The three friends sit together at a table, and without Carrie to guide their interactions, they have nothing to say to one another. Turned to full volume, their muted conversation appears to be Miranda saying names of locations: “Yes. From Canada? From New Jersey, Montreal, Toronto?” Cynthia Nixon, the actress playing Miranda, has to say something to make the scene look real -- but like Carrie, the writers of "Sex and the City" are unconcerned with making it look too real. Without the author there, it's not important.

Indeed, without their author there, these three women -- who are happy to describe their sex lives to Carrie or, more often, to be her sounding board, are flat and lifeless. They have nothing to say to one another because they’re all aspects of her. Carrie enters and embraces them all and they are overcome. A disco song, “You Got the Love,” begins to play. (The final scene of "Sex and the City," embedded below, features brief nudity and is not safe for most workplaces!)

The four ladies walk abreast down the street as Carrie narrates their endings; we see her, in the same outfit she’s wearing in the street scene, at her laptop, typing and narrating. Did she run home after meeting her friends to write up the whole thing? Or is she just imagining herself there? Either way, Carrie wishes Charlotte, Miranda and Samantha away, in what appears to be a final column, the culmination of her life’s work. Each woman gets a vignette summarizing her life, and is not seen again within the show. (Charlotte walks the dog with her husband, Miranda feeds the baby with her husband, and Samantha has wild but monogamous sex with her partner.)

“It’s all I can do sometimes to keep it together,” the song intones, as we cut to Carrie, in a ratty fur coat and holding a big bag, struts down the street alone, alone despite having just returned to the city after time away. What is she doing? We cannot possibly know, but she takes a call from a caller named “John” -- Big’s real name, that for some reason everyone from her friends (who go along and call him “Big”) to functionaries in restaurants and hospitals (who just avoid using his name altogether) has never spoken aloud. Why hasn’t Carrie ever encountered the sort of mutual friend who might call John by his name? And is it a little too neat that the man who bought her security goes by the term we use to describe that sort of man?

Big tells Carrie that he’s moving to New York, and what we can hear of the call cuts out; Carrie makes a quiet but visually striking laugh, her head flung back and her mouth wide open. He doesn’t ask where she is or what she thinks. There’s a long silence as she speaks to us in voice-over, completing a thought she’d begun before the call. “The most exciting, challenging and significant relationship of all,” Carrie had told us, “is the one you have with yourself.” Why would this be the thought she has at the exact moment her relationship is once-and-for-all secure? The state of her relationship with herself has waxed and waned but Carrie has always been deeply in touch with her emotions. “If you can find someone to love the you you love,” she continues, “well, that’s just fabulous.”

Fabulous, defined, literally means “of the nature of a fable or myth.”

And, as an aside, everything we know about the series indicates Big does not love the Carrie that Carrie loves -- the histrionic, materialistic city girl. He comes closer than her other boyfriends, but their perpetual fights have real substance. She's had to ignore everything that came before in order to arrive at this ending -- or, like a lazy author rather than the self-aware-to-the-point-of-paranoia dater we know her to be, written herself a deus ex machina.

The final shot of the series is Carrie disappearing into the crowd, walking away from the camera until she’s ultimately obscured by the crowd. Her story is over and she is a woman entirely alone and part of a crowd of individuals. The fact that a similar shot focused on Natalie Portman ended “Closer,” a movie released the same year that ultimately revealed itself to be about a serial liar who built herself a sexy fantasy life, can only be a coincidence. But the aesthetic effect is much the same. At the exact moment Carrie is telling us about her triumph, she’s more alone than ever before, laughing mutely into a cellphone as all of her friends enjoy the unlikely triumphs she’d written for them.

Of course, this reading, while satisfying, is deeply unlikely; as I say, it’s certainly not what the creators intended. But given the choice between a final reveal that a preternaturally gifted newspaper columnist invented four compelling stories that each end in a deeply Victorian marriage (or marriage-ish), and a final reveal that the writers of “Sex and the City” didn’t trust their audience to be able to metabolize disappointment or anything less than the perfect John setting Carrie free only to keep her for himself, I know which ending I’d choose. Perhaps someday we’ll view Carrie’s last column as the HBO version of the “St. Elsewhere” snow globe. Until then, I’m happy to be a crackpot.