People get ready: The PandaCam is going dark 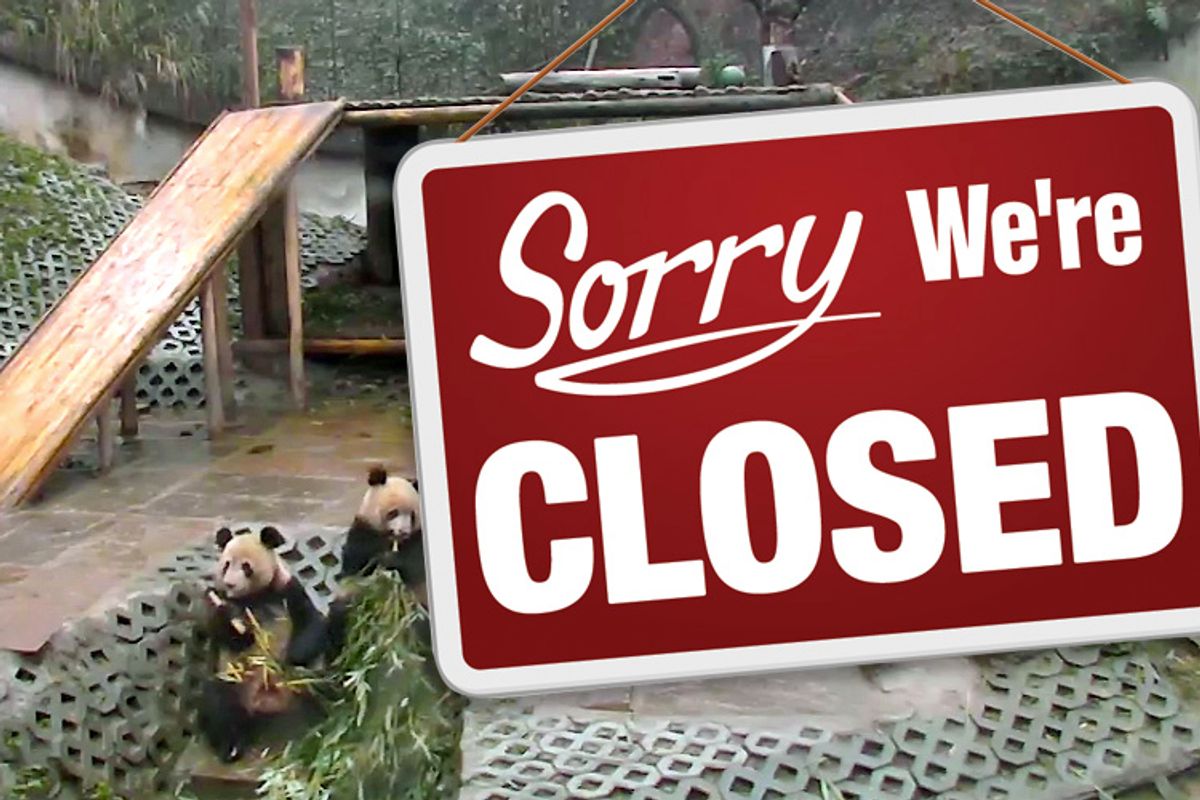 Your favorite government website may soon shuts its online doors. Ars Technica reported on Saturday that websites for the Library of Congress, National Park Service and Federal Trade Commission will cease functioning in the event of a government shutdown.

Don't care about all that boring stuff? Well, how about this? The PandaCam is in dire peril.

I'll bet you're  paying attention now! The decision by Ted Cruz and the House Republicans to make enemies of a panda-obsessed nation may well go down as one of the greatest self-inflicted wounds ever committed by a major American political party.

A "Memorandum for the Heads of Executive Departments and Agencies" from the Office of Management and Budget, dated Sept. 17, spells out the key details for online government activities.

The mere benefit of continued access by the public to information about the agency's activities would not warrant the retention of personnel or the obligation of funds to maintain (or update) the agency's website during such a lapse. However, if maintenance of the website is necessary to avoid significant damage to the execution of authorized or excepted activities (e.g., maintenance of the IRS website may be necessary to allow for tax filings and tax collection, which are activities that continue during an appropriations lapse), then the website should remain operational even if its costs are funded through appropriations that have lapsed. If it becomes necessary to incur obligations to ensure that a website remains available in support of excepted activities, it should be maintained at the lowest possible level.

There's an interesting assumption embedded in the government memorandum: the notion that the benefit of having government websites is only to provide information about the agency's activities to the public. That might have been true in 1994, when the Clinton administration first took the White House online with its "Gateway to Government." But that's not how the Web works today. Consider CFPB.gov, the website for the Consumer Financial Protection Bureau. The CFPB actively solicits complaints and information from the public through its website, which serves as a key mechanism for mobilizing those complaints into action.

In multiple speeches and public pronouncements, CFPB officials have aggressively urged consumers to file a complaint on the agency's public database, which has swelled to more than 200,000 complaints since going live in March. The agency uses that data to determine where it will focus its attention next, including both what regulations it writes and enforcement actions it takes against individual institutions.

As a result, some observers said banks need to realize that the best way to avoid the added attention or an enforcement action derived from complaints is by making it easier for customers to resolve the issue with the institution first. That includes improving the visibility of their complaint-taking systems and attempting to address problems quickly before a customer seeks out regulators for help.

I asked the CFPB what would happen to its website in the event of a government shutdown, but had not received a reply by press time. In any event, House Republicans are actively attempting to defund the entire agency, so they are unlikely to shed any tears about the fact that a government shutdown will cripple one of its most effective functions.

So we're back to PandaCam. Reddit? Imgur? Are you listening? They're trying to take our pandas away!