In an interview with Salon, Independent senator unloads on conservatives who urge young people to remain uninsured 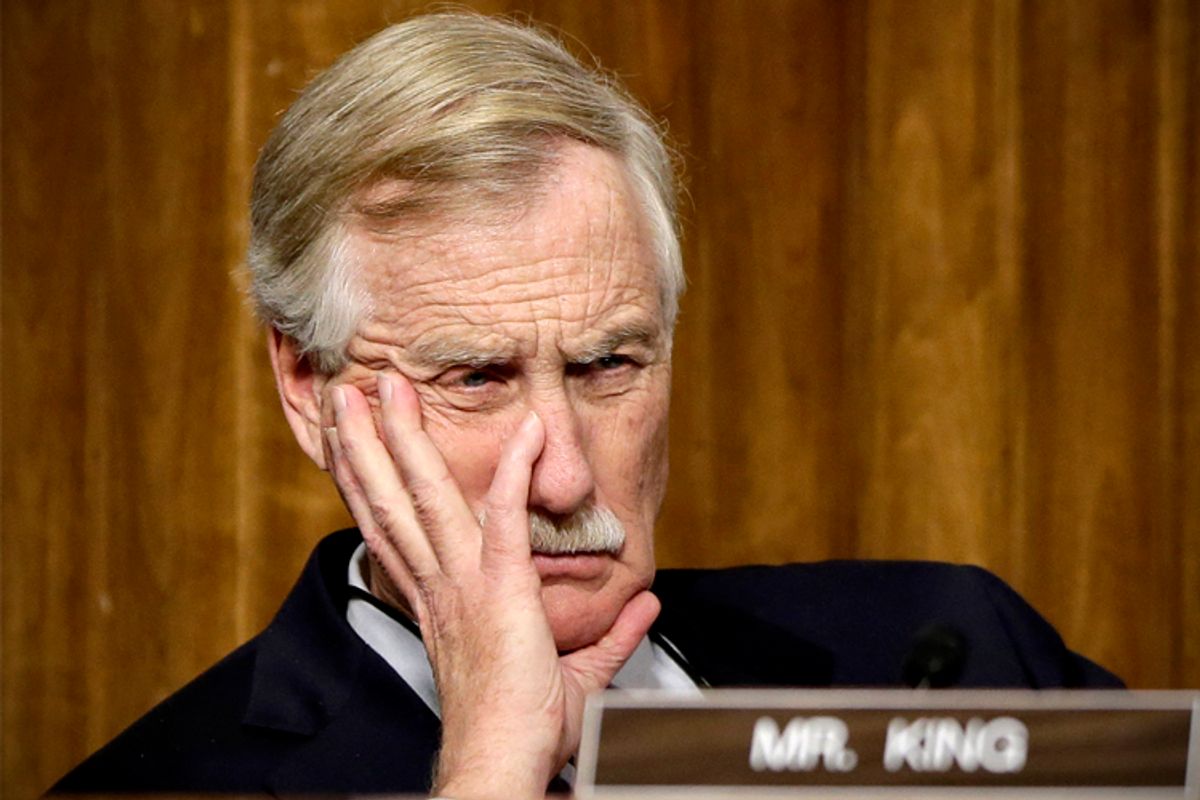 Tuesday begins a 6-month race to enroll as many uninsured people as possible in the Affordable Care Act's insurance exchanges. For the markets to be effective, they need millions of customers, and for elderly participants not to vastly outnumber younger ones.

It's in this context that well-heeled conservative groups are appealing to uninsured young people to remain uninsured -- part of a backdoor effort to undermine the structural integrity of the health care law.

Their efforts have attracted the attention of one senator who recounts how being insured saved his life when he was a young adult, and who has since then watched others die due to lack of coverage. And he doesn't mince words with those who'd take risks with other people's health security.

"That's a scandal -- those people are guilty of murder in my opinion," Sen. Angus King, a Maine Independent who caucuses with Democrats, told me in a Friday interview. "Some of those people they persuade are going to end up dying because they don't have health insurance. For people who do that to other people in the name of some obscure political ideology is one of the grossest violations of our humanity I can think of. This absolutely drives me crazy."

"I tried to look up the phone number for one of these guys … to ask "are you aware of what you're doing?" he added.

Forty years ago, when King was 29 years old, he was provided health insurance as a staffer for then-Sen. Bill Hathaway, D-Maine, and for the first time in a decade went to a clinic for a checkup.

"I had a health policy that included in it a free annual physical as a part of the policy and they had evening clinic hours. And I wouldn't have taken the day off -- and if that hadn't been covered under the insurance there's no doubt in my mind that I wouldn't have gone to have the checkup," King said.

"It was a routine checkup and the doctor found this mole, and I went in a week later to have the stitches out. The doctor told me I'd better sit down and that I had melanoma…. A month later I found myself having every cancer test you could imagine. Ultimately I had a fairly major surgery. The point of the story is that without the surgery I would have died."

On the Senate floor Wednesday afternoon, King recounted the story of Connie Gould, the daughter of a friend, who died prematurely at the age of 53 from the complications of asthma because she didn't have insurance.

Estimates vary, but most studies find that there's a mortality risk associated with uninsurance. On the order of 10,000 people die preventably each year as the result of uninsurance. That's a fraction of a percent of the 40-50 million uninsured people in the country, which makes it a relatively rare phenomenon. But stories like King's offer a counterpoint to the intuitive case -- uninsurance leads to delayed diagnosis, which leads to worse outcomes or perhaps death. And even if the deaths represent a small percentage of the uninsured, not even the most ardent Obamacare foe would shrug off such a large absolute number of deaths in any other domestic context.

He draws a contrast to the extraordinary, costly government response to the September 11, 2001 terrorist attacks, which killed 3,000 people. Bracketing arguments about the value of that response, if it's in the country's interest to spend billions of dollars a year to prevent high-casualty events like September 11, King reasons, it also in its interest to devote resources to prevent tens of thousands more year in and year out.

Reducing mortality, along with ending insurance company discrimination against people with preexisting conditions and reducing the incidence of medical bankruptcy in the United States, are among of the Affordable Care Act's main goals. But ACA opponents are loathe to grapple with the life-or-death nature of their advocacy and tend to lash out when confronted with it. As such, the debate over the law tends to center around other moral questions. But King doesn't think they should be let off the hook.

"That's bunk. You can't wish that reality away because you don't like the policy outcome," he said.

"Enabling more people to get coverage is not just common sense, it's humane," King added. "To me it boils down to a moral question, and that is would you allow someone sitting in front of you on the subway to die, or would you take some action -- call 911 or a doctor or do CPR yourself. Most people would say no I would not allow someone to die. You have to realize that as a society we're answering 'yes' to 25,000 a year who are dying before our eyes and saying we don't care."