Blame the Constitution for this mess

Our system of government gives opposition parties the power to cause crises. Why wouldn't they use that power? 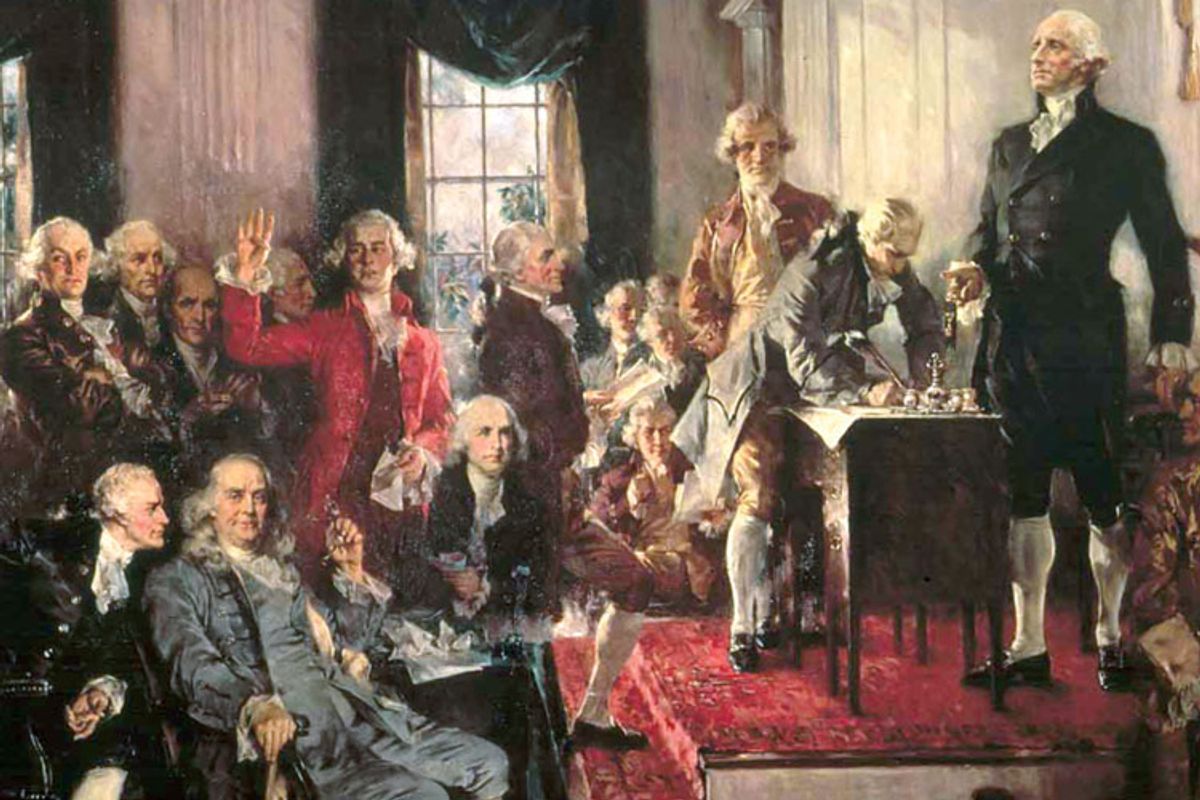 In our system of government, an opposition party doesn't have the ability to pass legislation, but it has the ability to massively screw things up. It would be strange if legislators didn't exercise that power in order to maximize their chances of either winning legislative concessions or hurting the current ruling party politically. Furthermore, our electoral system means that most House members are insulated from national attitudes about their actions, and, indeed, many Republicans members would be punished by their constituents -- especially the ones who vote in primaries, the only elections that matter in many House districts -- if they didn't exercise their power to screw things up.

The New Yorker's Ryan Lizza referred recently to a House "suicide caucus," a group of 80 Republicans driving the House further to the right, in defiance of national popular opinion and the wishes of the more "moderate" elements of their own party:

These people represent very white, very conservative districts. Partisan primaries and first-past-the-post voting provide even more incentive to be as far to the right as possible. How much can we blame this "minority of a minority" for acting according to the probable wishes of their constituents? Shouldn't we actually be more upset about a system of government that gives 80 people representing 18 percent of the population the ability to drag the United States to the edge of national default?

We're a year out from an election that, in a parliamentary democracy, would've easily granted one party control of the government. If, in this hypothetical American parliamentary system, the opposition wanted to force a showdown over the budget a year after the election, we'd have another election, and the winning party would get to implement its agenda. Instead, we're getting the sort of "compromise" American politics specializes in: the one where things are intentionally made worse for most people in the hopes that if things are made bad enough the other side will cave.

This is happening because our wise and noble founders devised a purposefully undemocratic federal government, in part because not many of them were particularly fond of the notion of democracy and in part because the ones who were at least a bit pro-democracy were forced to compromise with vile slave interests. We've since declared these creaky compromises to be evidence of political genius -- an elegant separation of powers! checks and balances! -- but the nearly 100 percent failure rate for other countries with true "Presidential systems" is a hint that it's a mess. Meanwhile, our Constitution's international influence has plummeted in recent decades. Its single best feature -- the Bill of Rights -- now looks stingy compared to the lists of positive enumerated rights in other nations' constitutions.

To be fair, it's not strictly the fault of the founders. They're to blame for the existence of the Senate, but they really did their best with the House of Representatives. Unfortunately multiple Congresses have, since the ratification of the Constitution, adopted various self-imposed obstacles to governance, from the "debt ceiling" (invented in 1917 -- only one other democratic nation has anything remotely similar) to the Senate filibuster (invented in the middle of the 19th century, normalized and codified in the late-20th). The budget process that led to this shutdown was only established in the 1970s (and there have been 17 shutdowns since).

As a nation we've also failed to enact various reforms (national popular vote, automatic universal suffrage, alternative voting methods, nonpartisan districting) that could make our fundamentally undemocratic system marginally more responsive to the will of the people. We have instead calcified a system that grants a legislative caucus representing a small minority great power that can only be used destructively.

We already know that our political system:

If we avoid a genuine economic catastrophe, because rational actor John Boehner determines that it's in his and his party's best interest to imperil his speakership by passing a government funding bill with a majority of Democratic votes, there will probably be a lot of self-congratulatory talk about how fine it is that America was strong enough to avoid this entirely self-created disaster. But even that supposed best possible outcome will be a continuation of self-created crisis politics. The government will be funded at pointlessly austere levels and there will be a built-in countdown to the next budget crisis.

We are actually a very rich country with a lot of resources and the ability to do almost whatever we want. We could eliminate poverty in America by spending a fraction of what we spend on defense. We could "bend the cost curve" in healthcare simply by expanding our existing single-payer system and just paying less for healthcare. We could end the jobs crisis by giving everyone jobs. At the moment, instead of doing any of those things, we're choosing to become a heavily armed failed state.

An American parliamentary system with proportional representation wouldn't immediately or inexorably lead to a flourishing social democracy, but it would at least correct the overrepresentation of an ideological minority, and cut down on intentional tactical economic sabotage. The reason we're in permanent crisis mode isn't "extremism," but a system of government that guarantees political brinkmanship.