Why I'm still a Catholic

I'm an American-born Korean adoptee, and sometimes Catholicism feels like my only culture 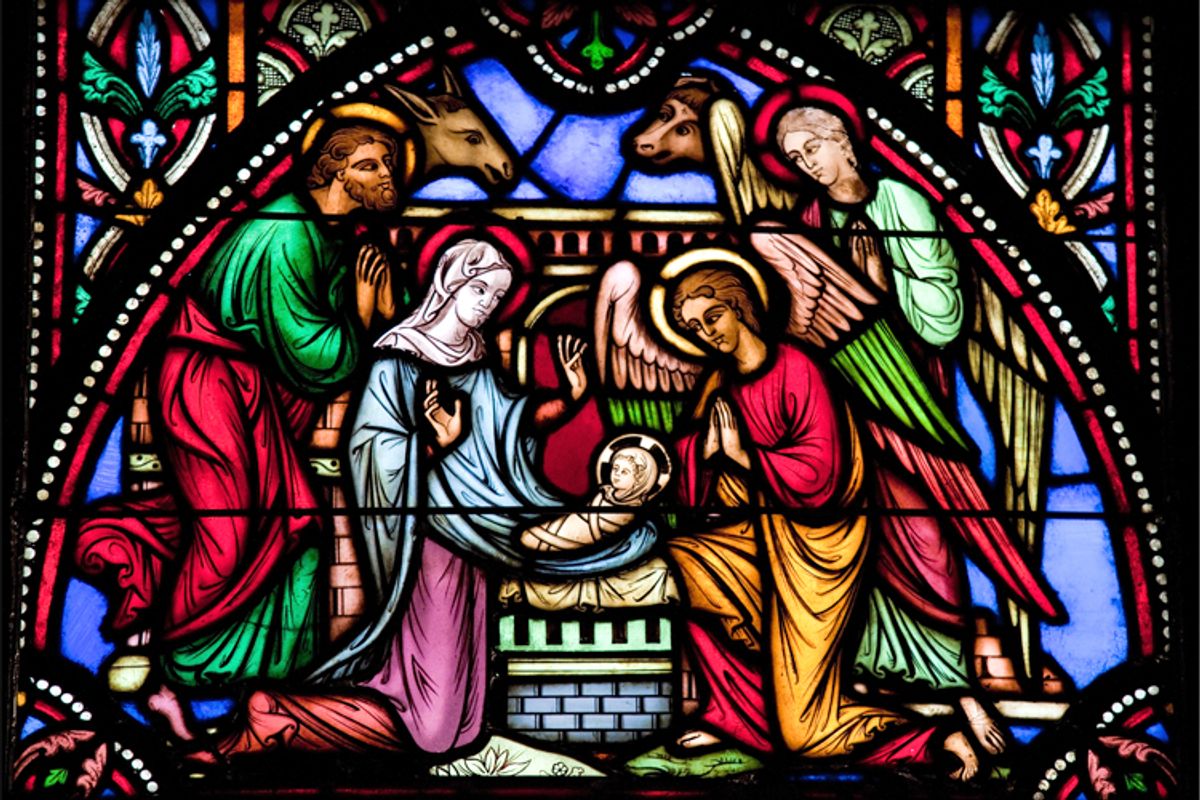 From the other room, I hear my eldest daughter ask her father the question. Again. “Did God really make us, Daddy?”

We always seem to return to this question, in some form or other: Is this story really true? It’s the theme of our daughter’s life thus far. She likes to hear about Jesus, and the lives of the saints, because for whatever reason they seem sufficiently “real” to her. What she can’t figure out is why we bother to read her the Creation story, even though we also read her books about evolution. “God couldn’t have made the whole world, because that’s impossible,” she announces, not for the first time. “The world just happened. No one made it. The Bible isn’t real, it’s just a story.”

Her father, a scientist, struggles a bit, casting about for a reply in the face of such bold 5-year-old agnosticism. I’m sure he wishes I would join them. Say something helpful, something wise. Instead I turn a page in the book I’m reading and pretend that I can’t hear their conversation.

I spend enough time trying to reason and explain and justify my faith to myself. I don’t need to do it with my 5-year-old — at least, not every time she issues a challenge. Maybe this is just my bad Catholicism coming out, but right now, I am OK with her doubts.

I am a bad Catholic. I am not proud of it, but writing the words, saying them, can also feel somewhat freeing. I am a bad Catholic: I miss Mass sometimes, I try to ignore all the stuff I disagree with, and I have been known to roll my eyes when I see a Prince of the Church being interviewed on TV.

My parents, who adopted me as a baby, were bad Catholics made good — lapsed old-school Cleveland Catholics brought back into the fold by a firecracker of a nun in Seattle. It’s because of Sister Mary Francis that they “reverted”; because of her that I was baptized and brought up Roman Catholic. My mother and father were not particularly progressive, but authoritarianism of any kind was never part of their parenting style, and our small, friendly parish had too many laid-back Oregonians for me to associate the faith with that creeping guilt so many Catholics speak of. Though my parents did leave again — they converted to Orthodoxy when I was in college — I’ve stayed in the Church. Married young, in part, because of it. Baptized my own two children into it without hesitation.

My Korean birth father is a devout Christian who was amazed to learn that I had been raised Catholic. When we reconnected in early 2008, he said he was glad that I went to church, but added that personally he “could never pray to statues.” I quipped, as I often do to Protestant friends, that I just can’t get enough of the graven images. I don’t think he realized that I was joking. “I know a lot of Koreans who are Catholic,” he rushed to reassure me. “They are good, godly people.”

Ever since I learned of Pope John Paul II’s canonization of Saints Andrew Kim Taegon, Paul Chong Hasang and the rest of the Korean martyrs, I’ve been fascinated with the history of the Catholic Church in Korea. It began as a lay movement after someone (probably the Jesuits, knowing them) helped smuggle some Catholic literature from China into Korea in the late 18thcentury. Years later, when missionaries finally made it to Korea, they found thousands of lay Catholics who had never seen a priest or attended Mass.

I wonder about the leap of faith it must represent to convert to a completely foreign religion. Does it especially appeal to people who are on the margins of their culture, who don’t already feel they have a place to belong? As an American-born Korean adoptee, I suppose I have always empathized with those early Korean converts, who became Catholic with so little guidance. Because, over the years, I’ve had to explore my Korean identity in a similar kind of void.

“Catholic” is a label I’ve worn for as long as I can remember; one that still fits me more easily, more comfortably, than almost any other. It’s on a list along with “Stay-at-home mother,” “Grad student,” “Writer,” “Liberal.” None of them feel quite as much a part of me; quite as accurate; quite as true. Not even, to my never-ending shame, “Korean.”

I sometimes wonder, had I grown up in a Korean family, steeped in the Korean American community, would being Catholic still feel like such an enormous and crucial part of my heritage, my identity? My adoption as an infant severed my connection to my birth parents, to the 18 known and recorded generations of my Korean family, to my culture and my history. As a child, my faith was almost the only thing in my life that made me feel that I was part of something larger — the only thing that constructed a kind of bridge between my own little island and the larger continents on which other families and clans and communities seemed to reside. Letting it go would mean jettisoning a huge part of who I am, severing that long-cherished connection to a kind of universal family.

Growing up I had almost no sense of myself as a Korean American — but as a Catholic, I had annual May crownings, years of lectoring and serving at Mass, First Communion and Confirmation parties, and that dusty bottle of holy water on our bookshelf that my mother never allowed to run dry. I had a catalog of prayers I knew by heart; ancient hymns paired with terrible folk-Mass songs written in the 1970s; the familiar rhythm and beauty of the liturgical seasons. I will always be grateful that I had those things. I want my children to have them, too.

This is why I understand all the people who have stopped going to church, yet still insist that they are “culturally Catholic.” I am culturally Catholic, too. There are times, in fact, when it feels like my only culture.

Change comes gradually in the Catholic Church, when it comes at all. Our church is not changing fast enough for many, which is a source of great frustration — particularly among those whose commitment to social justice and progressive causes are rooted in our faith.

Last year, when Maryland — a state that is approximately one-quarter Catholic — had a marriage equality initiative on the ballot, I interviewed one of many Catholics involved on the “pro” side, Ryan Sattler of Baltimore. He expressed his disappointment in the bishops, in the hierarchy, who had made their anti-equality position clear. For many Catholics, the definition of marriage is non-negotiable, bound up in Catholic theology about the purpose of marriage and what it represents: Christ’s love for the Church. Some speak disparagingly of those who dissent from the Church on this issue, dismissing them as “cafeteria Catholics” who cherry-pick what they want to believe without adherence to tradition or teaching.

At one point, I asked Ryan why he was still Catholic. I asked him not as a reporter, but as a fellow Catholic. I wanted — needed — to know why he stayed, given how much he found himself disagreeing with, how upset he was at the intractability of our leaders. As I asked the question, I was hoping his answer would be one I could relate to and perhaps remember the next time I asked myself the exact same question.

And bless him, he didn’t even hesitate before replying: “The Church has given me God’s love, God’s true presence. When I receive the Eucharist … I receive the Body and Blood of Jesus, who loves me and welcomes all people to his table — the same Jesus who is asking me to do what I can to feed the hungry, help the poor, love my neighbors. I know that I need a relationship with him and that I need to share his love with others. That’s why I’m Catholic. That’s why I stay.”

His words made it into the interview, and they also worked their way into my heart. They were words I could work with. Words I could understand. Words I would keep for myself, for times when I needed an answer.

I know a lot of progressive friends can’t understand why I’m still here. They roll their eyes when I quote Pope Francis. They point out that presenting old ideas in a new way isn’t exactly “change.” It’s true, and I don’t blame them for their low opinion of my church. Unlike many of my brethren, I don’t ever feel defensive or persecuted as a Catholic. To be honest, much of the time I feel rather apologetic.

Like it or not — and I don’t always like it — this ancient faith still has a hold on me. I am under no illusion that I’m making an important statement by remaining. Yet when I do think about leaving, somehow I always reach the conclusion that it will hurt me too much if I do, and it won’t help anyone else, either. As long as I have been Catholic, I’ve been aware of those within our church who are committed to social justice, who take it on faith that we’re called less to enforce the rules and more to serve others. If all the progressives leave or are driven away, I wonder what sort of a church we will leave behind.

Despite my disagreements, my weaknesses, my failures as a member of the Catholic Church, I can’t do anything but remain in it, though I’ve long since abandoned any pretense of being a great Catholic. Like all American Catholics, I flout and complain about and struggle to comprehend Church teaching; I emphasize the things I find easy to agree with, and minimize those that bother me. But while I am a bad Catholic, and I know it, I am also a practicing one. I have figured out that I’m just the kind who stays.

Though I can understand all the reasons why other people lapse and leave, I can’t seem to manage unbelief. Nor can I turn my back on the church that still gives me a home, a place to belong, when I so often feel that I don’t truly belong anywhere else. This might make my faith sound like a “crutch.” It very well might be. At times I feel that I cannot function, cannot stay on my feet, without it.

This piece is the second in a series by feminists of color, curated by Roxane Gay. To submit to the series, email rgay@salon.com.