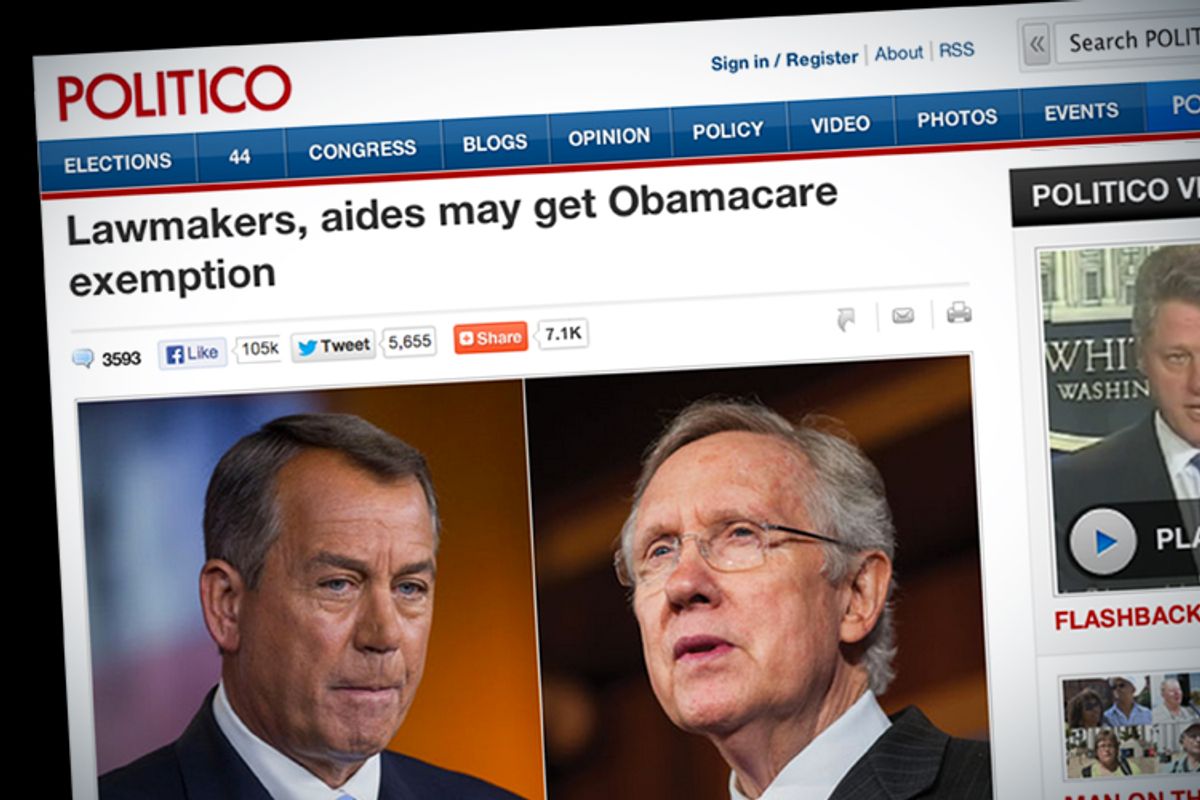 The Washington Post's Erik Wemple has a great story today on Washington, D.C.-area newsletter Politico, and its complex role in the creation of and reporting on the story of the "Obamacare" "Congressional exemption." (Apologies for consecutive scare-quotes but we're dealing with like seven layers of bullshit here.)

Basically: Politico has a juicy piece on how John Boehner scheduled a secret meeting with the White House to figure out a way to retain subsidies for healthcare once members and staffers are forced to purchase insurance on the new exchanges. Meanwhile, Boehner has been publicly pushing a bill to ban the subsidies, because the Republican position is that retaining employer-subsidized healthcare for congressional staffers and members is somehow an unfair "exemption" from Obamacare.

The deal is, members of Congress and their staffs get health insurance, like many Americans, from their employer, which in this case is the government. When the Affordable Care Act was being debated in the Senate, Sen. Chuck Grassley attempted to torpedo the bill by attaching an amendment mandating that members of Congress get their health insurance from the exchanges that the bill would create. Democrats were like "OK, sure, we'll call your bluff" and they agreed to the amendment. But this ended up creating a small problem, one that could be easily fixed if "fixing" the ACA was something the Republicans cared about: The amendment didn't specify that employer contributions would be maintained at existing levels, meaning that members and staffers would essentially receive huge benefits cuts for no real reason.

Boehner has to negotiate to reinstate employer contribution in secret because, as I mentioned, the plan to preserve the contributions has been tarred as an "Obamacare exemption" by conservatives. And where did conservatives get that idea? As Wemple says: "What the Politico story doesn’t address, however, is the role that Politico itself played in teaching people like Boehner just how explosive and politically profitable this 'exemption' story could be."

Politico practically invented the "Obamacare exemption" story itself, or at least it was the outlet that originally and cannily packaged the news as a scandal, based on an inaccurate Republican framing of the issue. In April 2012, Politico's headline was: "Lawmaker, aides may get Obamacare exemption." That was the piece that launched a thousand right-wing talking points, leading inexorably to Boehner trying very hard to stop his staff and his members' staffs from suffering a massive salary cut while also pretending in public to support that cut.

This is a thing that Politico does really well, better than almost any other media outlet. The thing is commonly called "Drudge-bait," but it's actually more complex than that, because it is sort of everyone-bait. What they do is create a "story" of some kind, from one random out-of-context quote or from a source who stands to gain from the creation of the story or sometimes simply from thin air. Then they let that story loose, out into the wild. Then, later, they "report" on how so many people are now talking about -- or "buzzing" about -- that story.

It is not necessarily an intentional or conspiratorial act. It seems to just happen sort of automatically, because of the people who work for Politico and its methods of sourcing and standards of newsworthiness. Mark Leibovich explained how this works back in 2010:

More recently, Allen asked in his April 10 Playbook: “Good Saturday morning: For brunch convo: Why isn’t Secretary Clinton on the media short lists for the Court?” By Monday, the convo had moved from the brunch table to “Morning Joe” (where the host, Joe Scarborough, advocated for her) and “Today” (where the Republican senator Orrin Hatch mentioned her, too). Later that day, Politico’s Ben Smith quoted a State Department spokesman who “threw some coolish water on the Clinton-for-Scotus buzz in an e-mail.” By then, the cable and blog chatter was fully blown. The White House issued a highly unusual statement that Secretary Clinton would not be nominated. Politico then sent out a “breaking news alert,” and Smith reported that the White House had “hurriedly punctured the trial balloon.” End of convo.

It is sort of beautiful, right? The newspaper reimagined as a highly efficient German-engineered buzz-creation machine.

There are so many more examples. Some of it is sort of traditional political media stuff, where a reporter starts out with a thesis (probably a thesis crafted by her editor) and sets out to prove it by specifically calling people who might agree with said thesis, and then publishes a story claiming the thesis is some sort of amorphous idea that has been floating around Washington and not simply an argument put forth by a supposedly "objective" news organization. See: this, or, more notoriously, the "voters are dumb" story.

But much of it is a form of speculative pseudo-journalism no one else can match. Like when Politico wrote a sensationalist story about Barack Obama "working systematically to marginalize" conservative groups and then "reported" on a speech Lamar Alexander gave based on the misleading conservative talking point that emerged from the Politico story. Or when Mike Allen reported that Roger Ailes was being "pushed" to run for president and then reported that Roger Ailes had decided not to run for president. Or Politico's exhaustive coverage of "the narrative" of scandals, which is to say its coverage of how Politico is covering Politico coverage.

And there was their frankly amazing September-October 2012 coverage, and meta-coverage, of the Mitt Romney presidential campaign, which I attempted to summarize here. Briefly: In the world of Politico, Mitt Romney's presidential campaign, in the space of about a month, was the victim of a deluge of wildly contradictory "narratives." It was in disarray, then rescued, then in disarray again, and finally rescued once more. Mitt Romney was sometimes a "lousy candidate" and sometimes the campaign's underutilized secret weapon. Stuart Stevens was righting the ship and then Tagg Romney re-righted the ship away from him. On Sept. 19, Mike Allen and Jim VandeHei wrote a story explicitly saying that a story they'd written three days earlier "doesn't matter." It was a master class in useless campaign pseudo-analysis.

But creating the "Obamacare exemption" myth, and then reporting on the ensuing chaos, is impressive even for Politico. Good work, guys.