We are all "Breaking Bad" truthers now 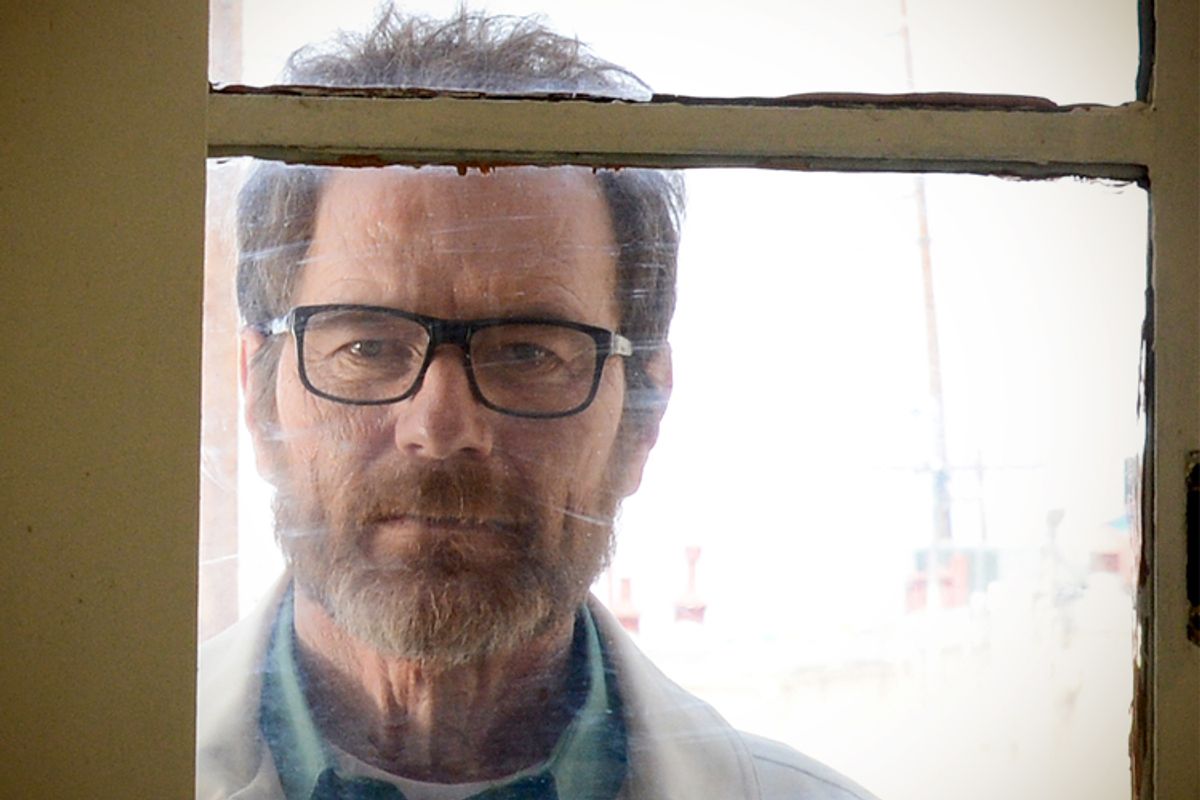 The season finale of “Breaking Bad” has been a national topic of conversation since the final season began in August, and on Sunday night, over 10 million people tuned into AMC to watch Walter White's curtain call. Before the much-anticipated “Felina,” pop-culture critics and bloggers were making bold predictions on the outcome. Betting pools were created over who would survive, and bars all over the country held viewing parties.

This type of pandemonium and anticipation led to some compelling, wild and amusing finale-episode theories. One theory held (likely in jest) that Walter White would wear a wire for the DEA, and Walt and his family would join the witness protection program, which would force Walt and his family into witness protection and serve as the beginning of “Malcolm in the Middle.” Another posited that since Skyler’s maiden name shows up on the fake ID Walt shows to the waitress in the diner on his 52nd birthday, “Walt is going to murder Skyler...and it probably had already happened before he showed up at the Denny’s in the season 5 cold open."

In essence, Vince Gilligan had created a conspiracy of details. Millions of fans of “Breaking Bad” began to look at every minute object, believing the writers left little breadcrumbs of clues as insight into the how the series would end. The sheer wealth of conspiracy theories began to mimic high-school English classes, where the color green became a symbol for Walter White. Everything in “Breaking Bad” was suddenly a clue or a symbol.

James Hamblin at The Atlantic seems to be one of the only writers to continue the conspiracy theories and propose the idea that Walter White is not dead. Of course, it’s a bit tongue-in-cheek. “I will believe that he is dead when I see a flat line on his ECG and a close-up of his flaccid jugular vein,” writes Hamblin. And while I wish I could join him and create a conspiracy theory for Walt being alive, the ending is just too conclusive. Gilligan seemed to want to eliminate as many loose ends as possible. But because the ending is so definitive, what is going to happen to the conspiracy of details set up before the end? How will the culture continue to talk about the show?

Luckily there's still plenty of room to analyze every detail for symbolism, and the last two weeks have brought out a culture of literary detectives, searching for thematic insight into Vince Gilligan’s mind or the internal machinations of the “Breaking Bad” characters. As Mary McNamara wrote in the Los Angeles Times, “Breaking Bad” is the new novel. The discussions around the show are stating to feel like book clubs.

A popular theory began circulating that Walter White’s mood was mimicked by the color of his clothes. He started out wearing khaki clothes, and as he became more involved in the production and sale of meth, his outfits became darker. This theory received a bump when Vince Gilligan, in an interview with GQ, admitted to paying close attention to color. So naturally, Gilligan’s color theory was broken down by John LaRue at TDYLF and turned into a wonderful infographic.

Reddit had some interesting analysis as well. Redditor ThePizzo856 came up with a connection between Jesse choking Todd from behind with the shackles of his own imprisonment and Walter choking Krazy-8 in the first season with a bicycle lock from behind. For ThePizzo856, it was a pattern of killing business associates that seemed to bring the story full circle and bookend the series.

Another example of literary detective work came from Chris Hardwick, host of “Talking Bad” on the final episode wrap up. Hardwick asked Gilligan about the scene in which Walt leaves the watch Jesse gave him at a gas station payphone. Gilligan explained that there were “artsy-fartsy reasons” as well as a practical reason for leaving the watch behind. In the flashforward of Walt in the diner on his 52nd birthday, he isn’t wearing the watch. The writers had to come up with a reason, so he left the watch on the pay phone. The “artsy” reason was that Walt was heading toward his death, and it would mark the end of a relationship with Jesse.

But does it really matter that Walt’s clothes go from dark to white and does that reveal something the viewer didn’t already know? Perhaps this level of searching for symbolism is the result of a definitive ending and an audience that wants to spend more time thinking, analyzing and creating connections that might not have even been there in the first place.

It’s easy to go down that rabbit hole because it’s fun to analyze symbols as if “Breaking Bad” was one of our dreams...or nightmares. For me, one detail from Sunday’s night show seemed to set up something larger about Walt. It’s not by accident that Walt is sent to New Hampshire to flee the police by the mysterious man selling vacuum cleaners. When Walt steals a car to head back to New Mexico, the license plate is an important detail. As Mr. White drives across the country and returns to New Mexico, he pulls into a gas station to make a call on the pay phone, and as the car drives into the station, the camera focuses on his bumper, stopping dramatically on the New Hampshire license plate, which reads “Live free or die.”

For Walter White, this small detail is emblematic of his entire journey. The greatest freedom Walt ever received was his death sentence. He was living a mediocre life and afraid of failure, which paralyzed him from taking any chances. He looked at his former partners, the Gray Matter bastards who come off like hollow and superficial cut-outs of a leisure class in “Felina,” and realized in Season 1 he had wasted part of his life and a major opportunity to build something legendary.

But knowing that he was going to die allowed him to forget his fear of failure and strive to build an empire, to be remembered, to break free from the rules of society and take what he wanted by manipulating every possible rule, while somehow trying to hold onto his ethical ideas of family. He admits to Skyler in the end that these ideas were all bullshit. As he stands in Skyler’s new apartment, about to say goodbye forever to his wife who is under investigation and struggling to support her son and daughter, he says, “I did it for me. I liked it. I was good at it. I was alive.”

General John Stark first uttered the New Hampshire state motto, but his full expression was “Live free or die; death is not the worst of evils.” For Walt, to live free was to finally live without the fear of death, to let go of family and morality, to feel alive. And a great irony is that the only time he feels truly free, the only time he has a moment of peace, is when he's bleeding from a bullet wound and staring at the meth lab. He falls to the ground as the cops are walking into the lab. He stares up at the ceiling. He’s not going to jail. His ultimate freedom is death, and ultimately, it feels like his own choice.