Adam Scott: "I wanted to be Ethan Hawke"

The actor on his early ambitions, how he made the turn to comedy, and his new movie, "A.C.O.D." 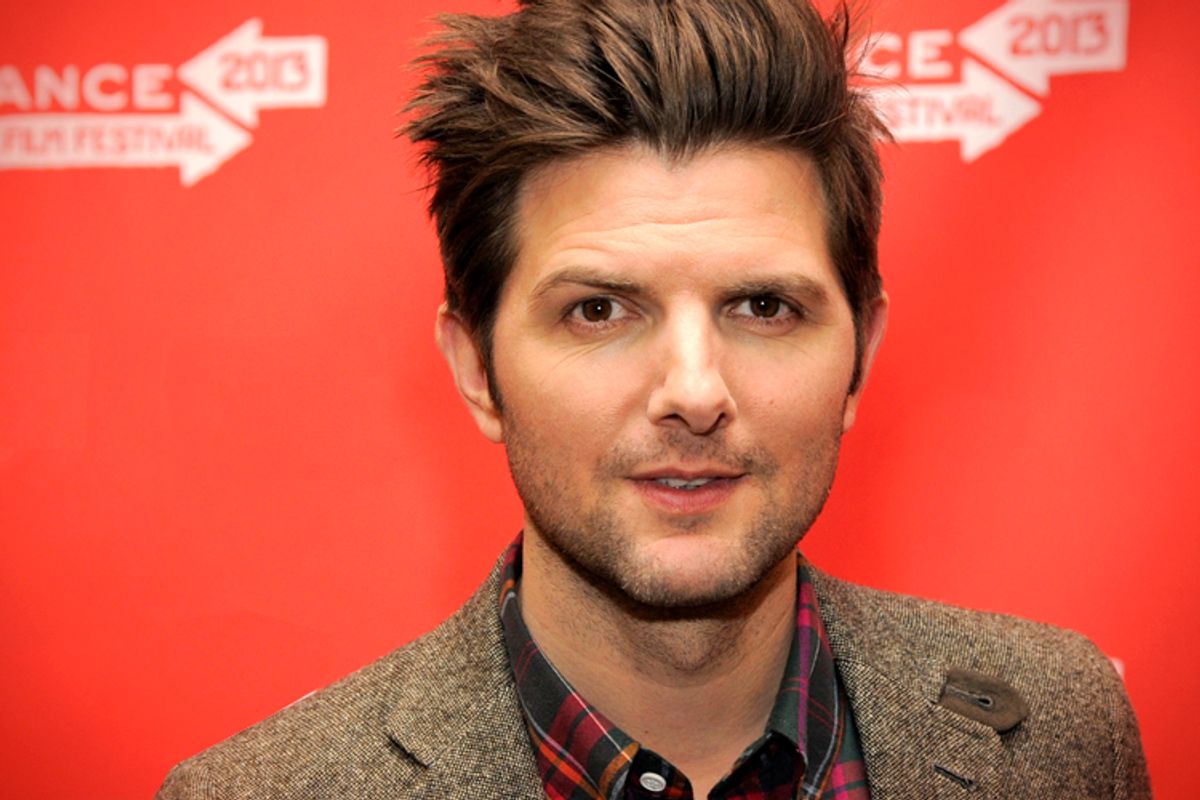 Adam Scott has, entirely by accident, become one of the comedy scene's leading lights. But he's yet to have had a big project all his own.

The actor appears each week on "Parks and Recreation" as the supportive husband to the protagonist, a hard-charging city councilwoman. He's been in films as diverse as the farce "Step Brothers," the pitch-dark comedy "Bachelorette," and the camp splatter-fest "Piranha 3-D," and on TV shows including "Childrens Hospital" and -- most notably -- the late, lamented cater-waiter comedy "Party Down." On that Starz comedy, which took off after its cancellation with viewings on Netflix, Scott played an aspiring actor stuck at a dysfunctional food-service company; it led to all manner of supporting gigs.

Scott finally gets the chance to break out on his own post-"Party Down" with "A.C.O.D.," a comedy opening Friday about the so-called "adult children of divorce." Many years after the divorce of Scott's character's parents (Richard Jenkins and Catherine O'Hara), the son begins to decompensate as the long-separated parents grow closer.

The film is small in scope and scale -- it played the Sundance Film Festival earlier this year -- but still represents a big opportunity for Scott, a comedy utility player who once fantasized about becoming a serious actor, like Ethan Hawke. He spoke to Salon about whether he thinks there'll be a "Party Down" movie, why he thought about throwing in the towel, and what issues he's working through in comedy.

It seems sort of accidental that you ended up doing almost exclusively comedies. You were in "Star Trek: First Contact"!

Yeah, it was definitely an accident, and it was definitely "Step Brothers" that changed it all and veered me in the direction of comedy. Growing up, I was really into Steve Martin, Albert Brooks, "Saturday Night Live," Monty Python and all of that, but I wanted to be and figured I would be a serious actor. That's what I always saw myself as. I guess I started professionally in like 1993. At the time, I wanted to be Ethan Hawke or Stephen Dorff, and always saw myself as that kind of actor. I was just a comedy nerd on the side.

It was a fluke I got that part in "Step Brothers" -- somebody had that part and dropped out, and for whatever reason the audition went well with those guys, and they took a chance on me. I sort of hobbled my way through that movie, then I fell in love with it and thought it was such fun; the comedy community is a really fun, lovely group of people. A year later, "Party Down" came along and I felt a little more at home there. Not that I want to stay exclusively in comedy, because I don't. But it was all probably by accident.

Does this movie have a point-of-view?

Stu and Ben ["A.C.O.D." writers Stu Zicherman and Ben Karlin] are fascinated by marriage and by fidelity and what it means. And their upbringing specifically draws them to almost the study of it. Stu is not done talking about marriage. I grew up in an incredibly healthy environment; my parents got divorced when I was very young, but they did it in a way that there was a very healthy, happy upbringing for me. I have a great, healthy marriage, and I'm not particularly cynical about marriage. I'm not sure that I could have written this screenplay -- not just because I'm not a writer, but also because my upbringing wasn't as tumultuous as theirs. My version of this screenplay wouldn't be as entertaining or good, because my upbringing was much healthier.

Do you ever use your work to work through issues?

"Party Down" was kind of a direct line to the 15 years prior to "Party Down." Just constantly striving for something. At the point "Step Brothers" and "Party Down" came along, I was starting to realize that it may never happen. I was not ready to give up, exactly, but accept that I might be doing guest spots on "CSI: Miami" for the rest of my career. I was fried and ready to throw in the towel. "Party Down" was a great way to work out those feelings, feeling like that character. A lot of us in that cast were. The character on "Parks and Recreation" is the same way, not knowing where you fit in or belong, career-wise.

Does it annoy you that people are still asking about a "Party Down" movie?

Lots of people are still discovering the show. At the time we were airing, no one was watching it. The fact that the words "Party Down" came out of David Letterman's mouth is incredible. This was before people were in the habit of watching things online; we fell between the cracks. If we'd been online while we were airing I think it would've been a different story. Netflix really did it for us. The fact people know what the show is is surreal. As far as the movie goes, I don't know if that'll ever happen, but people asking about it -- you know, it's nice.

Given how rapid your rise to your current level of fame has been, are there goals you still want to accomplish?

I still feel like I'm just getting started. I'm not sure exactly. I'm thinking about finding something more dramatic to do. My wife and I created a show together on Adult Swim; it's gratifying to start something from the ground up and I love doing that. I'm not exactly sure what I want to do next, but I'm thinking about taking a left turn and doing something completely different.