The right's new lie about its shutdown intentions

Ted Cruz and co. now claim this dispute is about veterans and reservists. Here's why no one should believe them 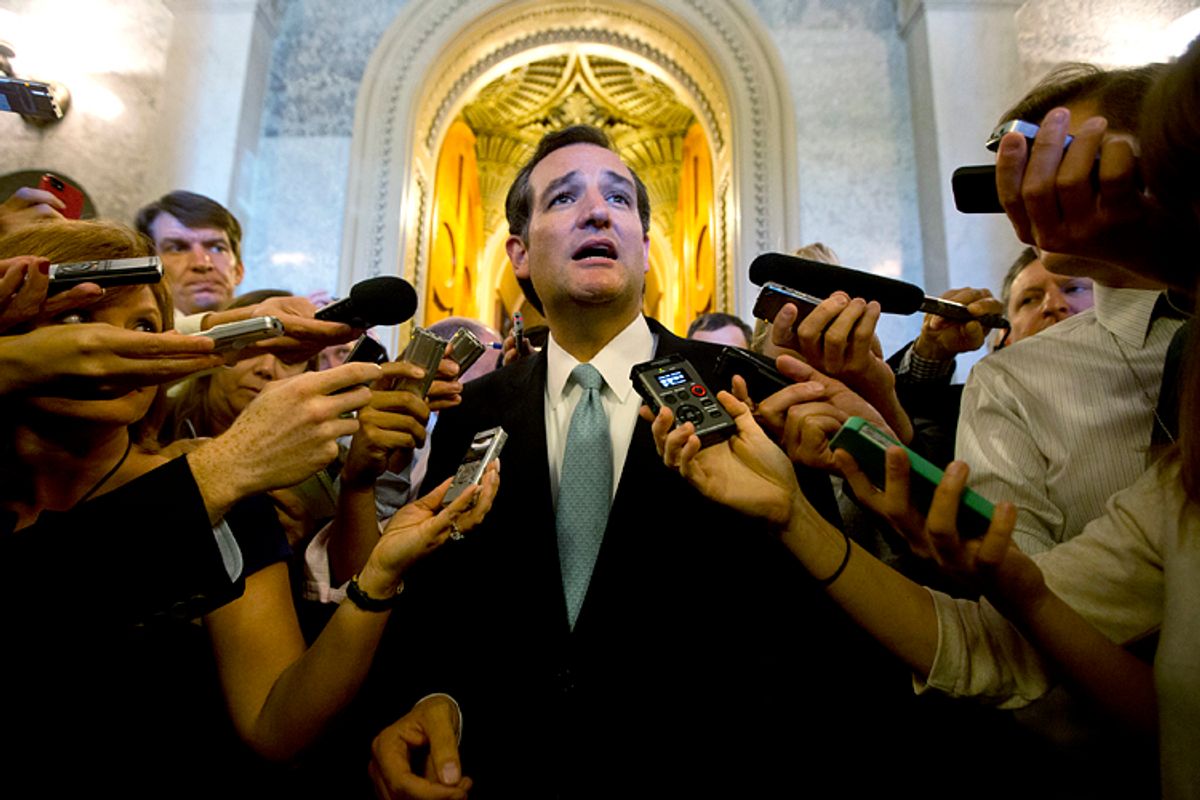 If Ted Cruz is making John Boehner dance like a marionette, then Rep. Mark Meadows, R-N.C., is the guy helping Cruz keep the strings untangled.

He's the author of the House's version of the famous letter insisting that Republicans make funding the government contingent upon gutting Obamacare. He didn't, and won't get Obamacare defunded. But the signatories to that letter are a decent proxy for the group of hard-line Republicans who are holding Boehner's speakership over his head and thus making the country ungovernable.

So it was a big surprise when he told reporters on Tuesday that, really, the government shutdown has nothing to do with Obamacare.

"This fight now has become about veterans and about national guard folks that perhaps -- reservists that are not getting paid," he said. "That's where the fight is today. Obamacare is mandatory spending that's going on."

Well, that's great news! If the government shutdown fight isn't about Obamacare anymore, then opening the government back up should be a cinch. Could be done in a matter of minutes.

But Republicans have no intention of opening the whole government back up. That's why they spent all of Wednesday passing bills to reopen its narrowest but most visible and high-valence offices. Meadows was clumsily undertaking an act of subterfuge that has united the whole party. An attempt to distract the public and the press from the totem that's been at the center of the shutdown from the get-go. Unbeknownst to him, Meadows was also challenging the press not to allow itself to get bamboozled by these distractions.

When NPR's Tamara Keith asked the obvious follow-up -- if it's not about Obamacare anymore, why not pass a complete funding bill? -- Meadows devolved into gibberish and scurried away.

You can listen to the audio here, courtesy of public radio's Todd Zwillich.

A complete (or near complete) government shutdown is a big problem for the GOP for two related reasons. First, conservative Republicans have been telegraphing their intention to freak out and shut down the government over Obamacare for months, and now they've gone and done it. And so the hardships it causes people create tons of pressure on them -- not Democrats -- to cave.

Caving would mean genuinely giving up on extracting Obamacare concessions, and funding the whole government on a bipartisan basis. But if you only take care of the most glaring hardships -- the ones that befall organized constituencies, Republican constituencies, highly visible constituencies -- suddenly the pressure to cave recedes. Huge parts of the government remain shut down, and Republicans can go right back to demanding Obamacare concessions as the ransom for reopening the parts of the government that benefit the voiceless.

They ran a version of this play after the sequestration order went out earlier this year. They pushed for special flexibility for the FAA, so that business travelers wouldn't be inconvenienced by flight delays and Dems gave it to them. It was an error. In so doing, they placated a powerful lobby they could have marshaled to rescind all of the cuts. Poor people had no such recourse, and sequestration continues to harm the programs they rely on to this day.

Democrats aren't falling for it this time. They passed a bill to secure military pay, but have so far rejected all other piecemeal shutdown fixes. Not because they're craven or want the shutdown, and not even really because they care about the principle of equal treatment, though I suppose they do. Democrats aren't letting Republicans make the shutdown they caused painless for themselves to endure. And that's set off a massive fight for narrative control. Who's really pro-shutdown, if Republicans are at least trying to open parts of it? Republicans want to enlist the press in its campaign to flip the script on Democrats, and have even had some success.

On Wednesday we watched them turn barricades around the national World War II memorial, and an unforgivably decontextualized Harry Reid quote about cancer-stricken children, into full-blown conservative freakouts. That Reid quote came in the course of a response to a question from CNN: "If you can help one child who has cancer why wouldn't you do it?"

Democrats' fully contextualized response to this is that there's no reason to pit cancer patients against anyone else harmed by a shutdown -- House Republicans should put a bill to reopen the whole thing on the floor right away. An unspoken response is that bailing out Republicans by helping them secure special treatment for the most sympathetic victims of the shutdown will prolong the suffering of all the others. I'd add a third, which is that as long as the real issue driving the shutdown is the GOP's Obamacare obsession, their attempts to pass narrow funding bills is actually a smokescreen for denying millions of people, including cancer patients, access to healthcare.

But the fact that this is even a question is a sign that the bamboozlement is working.