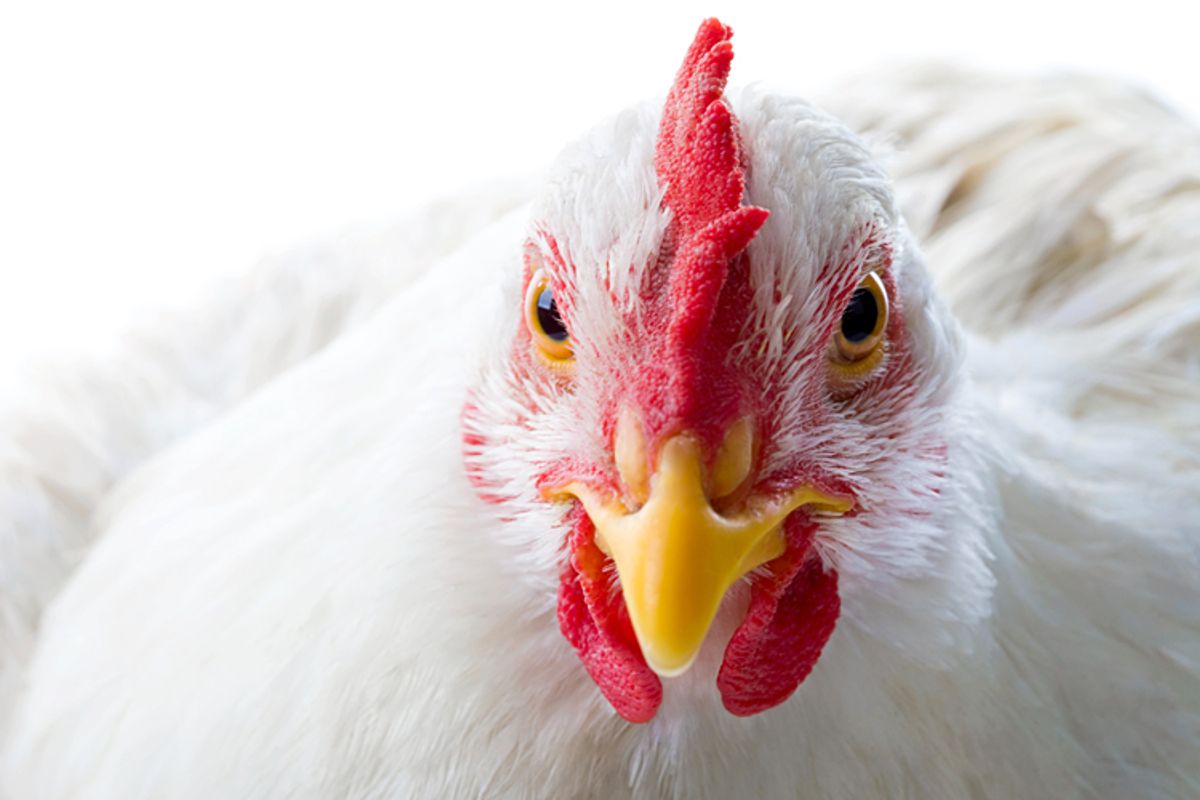 The other day there was this guy in a chicken suit on Pennsylvania Avenue protesting outside the White House. Silly, but the reason the chicken and other demonstrators had crossed the avenue was to deliver a petition of more than half a million names, speaking out against new rules the US Department of Agriculture wants to put into effect – bad rules that would transfer much of the work inspecting pork and chicken and turkey meat from trained government inspectors to the processing companies themselves. Talk about putting the fox in the henhouse!

The revised regulations also call for a substantial speeding up of the disassembly line along which workers use sharp knives and often painful, repetitive hand motions to cut up and clean carcasses of dirt, blood and other contaminants that can cause infection and sickness. Not only will this increase in speed – by 25 % or more -- raise the chance of injury, it makes it easier to miss anything wrong – even deadly -- with the meat. To compensate for that, the rules also call for an increase in the use of antimicrobial chemicals sprayed on the meat -- but those sprays may actually damage the health of theworkers. Inspectors and meat packing employees report instances of asthma, burns, skin rashes, sinus trouble and other respiratory ailments, some of them severe. What’s more, when complaints were made about health or hygiene, the response from employers often came in the form of threats and reprimands.
According to the Agriculture Department, their plan will increase food safety, but early last month, the Government Accountability Office – the GAO -- reported on a years-old pilot program for some of these new rules and determined that the data on which they were based was, in the words of The Washington Post, “incomplete and antiquated.” One study used data that was more than twenty years old.
The Agriculture Department says the new rules will save the Federal budget $30 million annually, but compared to the more than $256 million it will save the poultry industry every year, that’s chickenfeed. In reality, as Tom Philpott, the food and agriculture correspondent for Mother Jones magazine, succinctly put it: “…The Obama administration has been pushing a deregulatory sop to a powerful industry based on a shoddy analysis.”
The Centers for Disease Control and Prevention estimate that “each year roughly one in 6 Americans (or 48 million people) get sick, 128,000 are hospitalized, and 3,000 die of foodborne diseases.” Every state in the union has seen an outbreak in foodborne illness over the last decade; men, women and children made sick by E.coli, salmonella and other pathogens in everything from meat to produce, cereal, even peanut butter. The progressive website Truthout notes that “Americans are 110 times more likely to die from contaminated food than terrorism… at an annual cost to the economy of nearly $80 billion.”
And yet, when Congress passed the Food Safety Modernization Act almost three years ago, designed to toughen standards, the representatives of the food industry – spending tens of millions in campaign contributions and lobbying money -- went after it with a vengeance, delaying and watering the final version down so much that the Food and Drug Administration can barely function, its own inspectors unable to fulfill their duties. (The situation was made even worse by the government shutdown.)
In 2011, the FDA inspected only six percent of domestic food producers and less than half a percent of imported food – and this at a time when more and more of our food – including two thirds of our fresh fruits and vegetables – is coming from overseas.
Additional pressure on Congress and state legislatures comes from our old friend ALEC, the American Legislative Exchange Council, funded by Koch Industries and other corporations – including, recently, Google and Facebook – as well as conservative organizations, to draft legislation designed to benefit big business no matter the cost to the rest of us.
In an introduction to its so-called “agriculture principles,” ALEC announced, “The proper role of government involvement in agriculture is to limit and remove barriers for agricultural production, trade and consumption throughout our innovative food system.”  Safety restrictions should “incorporate a least restrictive approach,” it says, while at the same time ALEC encourages high tech, high yield farming and calls out against  “unnecessary additional restrictions on the use of antibiotics in animal agriculture.”
ALEC boasts abut the safety and quality of our food system – the highest in the world, it says – but at the same time designs and pushes legislation designed to prosecute and crush journalists, whistleblowers and animal rights activists who would secretly infiltrate the food industry to expose shoddy practices and unsafe, unsanitary conditions that threaten the nation’s well-being. These so-called “ag-gag” bills criminalize those who would report abuse. If such laws had existed a century ago, a muckraker like Upton Sinclair would never have been allowed to report the sordid practices of the meat packing industry that led to his book “The Jungle” and saved who knows how many from tainted food, sickness and death?
Add to this the controversy over growth-enhancing drugs and hormones, the danger of genetically modified foods, the cruelty of big business factory farms: how can measures like these sound like good ideas to anyone other than those who would put profits above public health? It’s called “runaway capitalism,” and the time has come to stop this free market fundamentalism gone amok.
It’s enough to make you sick.