7 signs America has regressed -- to the 19th century

Workers aren't unionized, and some pols are now advocating child labor. It's like the U.S. has gone back in time 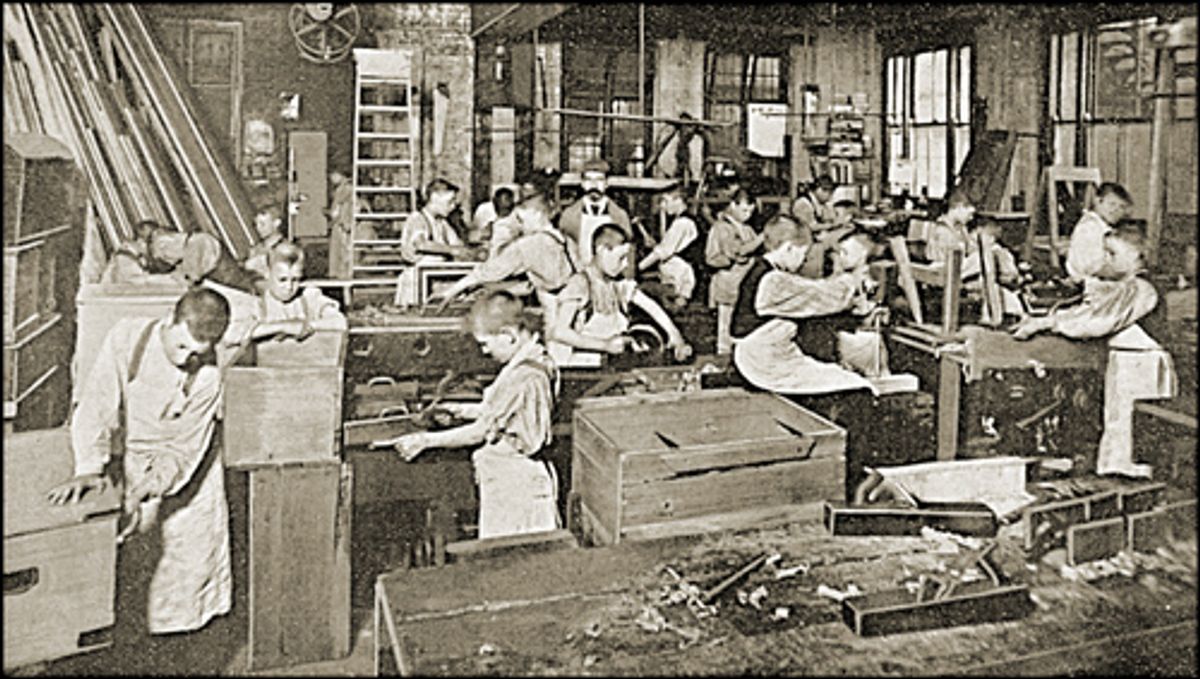 Of course they shut the Federal government down. Tea Party Republicans long for the days when there were no government authorities to enforce laws and restrain the power of unchecked wealth, the days when there was no Justice Department, no SEC, no other agencies protecting Americans from the misdeeds of bankers and corporate titans.

But it already seems as if our entire country has secretly been transported back in time. We may think we’re living in the 21st century, but all the signs suggest we’re living in an earlier and harsher era.

Here are seven signs the United States of America has returned to the 19th century.

1. Wall Street can “send your man around to see my man” again.

Shocked by newly elected President Teddy Roosevelt’s moves against Wall Street, J. P. Morgan went to the White House. "If we have done anything wrong,” said Morgan, “send your man to my man and they can fix it up."

"That can't be done," said Roosevelt. "We don't want to fix it up," his Attorney General added, "we want to stop it." The year was 1902, and 19th-century privilege was over for Wall Street. Now it’s back, and so are the “men”—and as the recent foot-dragging over female Fed chair candidate Janet Yellen highlights, they almost always are men.

The chief architects of deregulation in the 1990s included Sen. Phil Gramm, President Bill Clinton and Treasury Secretaries Robert Rubin and Larry Summers. That deregulation cost millions of Americans their jobs and millions more their life savings. But the parties behind it did just fine.

Gramm went to work for UBS bank immediately upon leaving the Senate in 2002, and is now vice-chairman of its investment banking division. Robert Rubin eventually headed up Citigroup, the megabank whose creation was made possible when his Treasury Department pushed for a then-illegal merger between Travelers and Citibank. Rubin was to become deeply implicated in the fraud and scandal which led to the 2008 crisis, although he claimed ignorance of his own bank’s doings and never faced prosecution.

Larry Summers has made millions from Wall Street banks. Bill Clinton made tens of millions “advising” two investment funds belonging to billionaire Ron Burkle. Exactly how much isn’t known, but a very public falling out involved Burkle’s alleged “stiffing” of Clinton on a final $20-$25 million payment. Clinton went on to serve as an advisor of Teneo Capital until February 2012.

White House visitor logs, which are woefully incomplete, show that Wall Street’s top dogs were frequent guests, especially at the height of the bank bailout. Despite massive fraud and tens of billions in fines and settlements, not one senior banker has been indicted for the crimes which brought down the economy.

Teddy Roosevelt’s legacy has been undone. Bankers can “send their man" to see the president’s man—and he's frequently the same man.

The horrors of working life during the Industrial Revolution led to the rise of the American union, beginning in the year 1860. The US State Department estimates that 3 percent of the workforce belonged to a union by the close of the 19th century. That number rose to roughly 7 percent by 1930, and to more than one worker in four by 1954.

The percentage of working people in unions has now dropped to roughly 7 percent again for private-sector workers. That’s roughly the early-20th-century level. When you add in government employees, who are more heavily unionized, the number rises slightly, to 11.5 percent. Our national and state capitals remain in the grip of an ill-advised round of cost-cutting that’s bringing the total number of government employees down quickly, which adds to the decline of these numbers.

Thanks to a four-decade-long campaign against them, unions—and workers—are more likely to be vilified than praised. It’s almost impossible to imagine today’s United States Congress passing the 1895 law that created Labor Day.

3. Our rights end at the workplace door.

Our individual rights are being steadily eroded in the workplace. As employment lawyer Mark Trapp told Business Week, “the freedom to speak your mind doesn’t really exist in the workplace.” A series of court cases has shown that Americans can be fired for expressing political opinions outside their place of employment, too, on social media like Twitter or Facebook.

One of the unions’ first demands was for a shorter workday, which in the 1800s meant a 10-hour maximum. Now we’re moving back toward 19th-century standards. As the Washington Times reports, “Americans are working approximately 11 more hours per week now than they did in the 1970s, yet the average income for middle-income families has declined by 13% (when adjusting for inflation).”

Here’s a 19th-century image, from the New York Times: “ …employees at lower rungs of the economic ladder can be timed with stopwatches in the bathroom; stonewalled when they ask to go; given disciplinary points for frequent urination; even hunted down by supervisors with walkie-talkies if they tarry in the stalls.”

What’s the matter with kids today? According to a number of conservatives, they’re not being put to work in factories and farms. Child labor, one of the moral blights of 19th-century America, is increasingly popular on the right again.

Child labor laws do not permit children under the age of 14 to work in non-agricultural settings. That is “truly stupid,” Newt Gingrich said last year while running for the Republican presidential nomination. Children aren’t learning the proper “work habits,” said Gingrich, who proposed firing most school janitors and giving the jobs to underage minority children instead.

Arkansas congressional candidate Tom Cotton also believes in child labor. "We need more young people who've worked all day in the fields, not less,” said Cotton during his 2012 campaign. Cotton won his race and now serves in the House of Representatives.

5. It’s practically legal to shoot people down in the streets again.

At least 22 states have some version of the “Stand Your Ground” law, which permits people to shoot and kill another person if they feel in danger, even when it’s possible to escape safely.

A nonpartisan political group called Mayors Against Illegal Guns is part of a coalition whose recent study showed that states which passed Stand Your Ground laws between 2005 and 2007 saw a 53 percent increase in “justifiable homicides.” As the coalition notes, “this increase is not simply the result of more homicides being classified as ‘justifiable,’ but also of an overall increase in firearm-related and overall homicides in Stand Your Ground states.”

The report notes that prosecutors in these states had greater difficulty convicting violent offenders.

“The findings in this report aren't surprising, given that these laws give anyone with a gun more permissive rules of engagement in America's communities than our troops have on the battlefield," said Jon Soltz, a two-tour veteran of the Iraq war and chairman of VoteVets.

The laws are also more permissive than 19th-century law, despite the fact that dueling remained legal until 1859, when most states outlawed it. Unlike Stand Your Ground, both parties in a duel were armed and had an equal chance of success. Duels were also voluntary, whereas a person who is shot under Stand Your Ground has no choice in the matter.

6. The rich have more of our national wealth than they did in colonial times.

As Jordan Weissman demonstrated in the Atlantic last year, the top 1 percent and the top 10 percent capture more of our national income now than they did in the 1700s, before we won our nation’s independence. Inequality was worse by 1860, but is even worse today than in either century.

This country enacted a series of laws which enabled Americans to achieve social mobility. But in the wake of cuts to everything from education to childhood nutrition, and with the decline of the American middle-class, those opportunities are fading too.

Here’s one of the main reasons the middle-class is declining: With no strong counterforce representing employees, corporations are also amassing more wealth than ever. The charts Henry Blodget made last year remain essentially unchanged: as corporations amass more and more wealth, they’re sharing less and less of it with workers in the form of wages.

As G. William Domhoff shows, by the end of the Reagan era the percentage of national wealth going to the top 1 percent had returned to pre-1929 levels. It has continued to climb since then. A recent review of 2012 economic data shows, among other things, that the top 1 percent saw their incomes rise by a staggering 32 percent in one year—and that the top 10 percent captured more than half of our nation’s income for the first time since they started tracking this data a century ago.

7. Political debates are getting rough again.

It starts with the rhetoric, and politicians were rough on each other in the 1800s. Sen. Charles Sumner spent hours calling an opponent a “pimp” and mocking his limp and speech impediment, both of which were caused by a stroke. The Lincoln-Douglas debates of 1858, when they ran against each other for the Senate, included racial slurs and other insults (although Douglas graciously held Lincoln’s hat while he was sworn in as president, after losing to him in the 1860 election).

In the days of duels and fights of honor, political rhetoric quickly escalated into violence. Perhaps the most famous incident of pol-on-pol violence was the caning of abolitionist Sen. Sumner on the floor of the Senate by pro-slavery Rep. Preston Brooks, as another Southern congressman held a pistol on observers to prevent them from intervening.

Representatives were seen carrying guns on the floor of Congress in 1836. One representative drew a gun on a witness during a hearing that year.  In 1842 a Whig Party congressman from Tennessee was threatened with a knife by fellow party members.

Today a new era of incivility has dawned in the capitol building. Its watershed moment may have been the day Republican Rep. Joe Wilson shouted “You lie!” at President Obama as the President addressed a joint session of Congress. While Wilson was eventually admonished by the House, the vote was almost entirely along party lines. (Only seven Republicans joined with Democrats on the vote.)

Wilson was able to beat his nearest primary challenger by nine points the following year, and to run unopposed in the general election. He received 96 percent of the vote.

The gloves are off, and the new harsh rhetoric is coming almost exclusively from a party that refuses to sanction its members for it. Rep. Michele Bachmann has been a one-person factory for inflammatory quotes. And in a very 19th century—and very crude—letter, Republican Rep. Allen West wrote to Democratic Rep. Debbie Wasserman-Schultz: "You have proven repeatedly that you are not a Lady, therefore, shall not be afforded due respect from me!” West has also said that Nazi leader Josef Goebbels would be “very proud” of Democrats, and that liberals should “get the hell out of the United States.”

Fortunately, government leaders have yet to turn on one another physically. But that day may be coming. Michael Schwartz, Chief of Staff for Sen. Tom Coburn, said this: ““I’m a radical! I’m a real extremist. I don’t want to impeach judges. I want to impale them!”

Rep. Peter King has been a one-man hate campaign against Americans of the Muslim faith, and he has not been censured or reprimanded by his party in any way for his hate-filled rhetoric.

In 1884, the spokesman for Republican presidential candidate Hal Blaine accused the Democrats of being the party of “rum, Romanism, and rebellion.” This anti-Catholic slur caused Blaine to lose the state of New York, giving the presidency to Grover Cleveland. Democrats may be hoping that comments like King’s will help to reproduce such election results in coming years.