The neuroscience of Facebook: It makes our brains happy 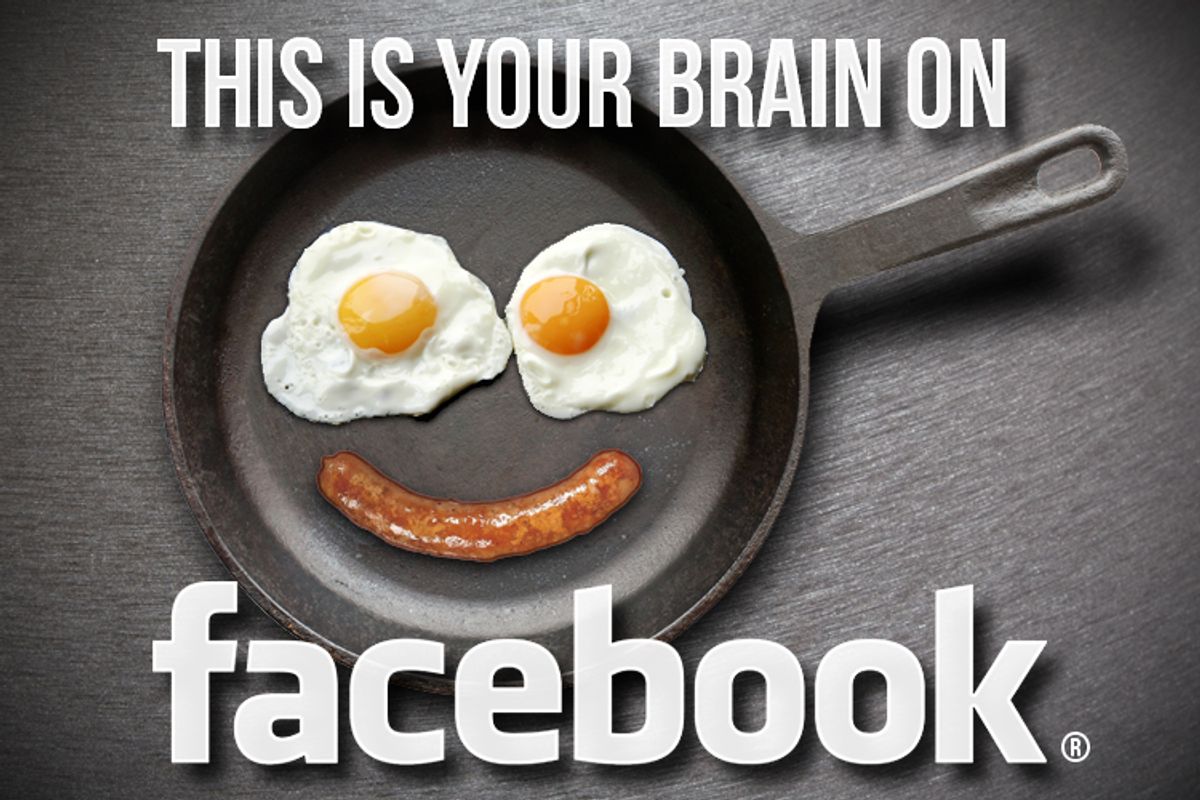 Excerpted from "Social: Why Our Brains Are Wired To Connect"

The popular conception of human nature emerging from psychology over the last century suggests that we are something of a hybrid, combining reptilian, instinct-driven motivational tendencies with superior higher-level analytic powers. Our motivational tendencies evolved from our reptilian brains eons ago and focus on the four Fs: fighting, fleeing, feeding, and fooling around. In contrast, our intellectual capacities are relatively recent advances. They are what makes us special.

One of the things that distinguishes primates from other animals, and humans from other primates, is the size of our brains—in particular, the size of our prefrontal cortex, that is, the front part of the brain sitting right behind the eyes. Our big brains allow us to engage in all sorts of intelligent activities. But that doesn’t mean our brains evolved to do those particular things. Humans are the only animals that can learn to play chess, but no one would argue that the prefrontal cortex evolved specifically so that we could play the game of kings. Rather, the prefrontal cortex is often thought of as an all-purpose computer; we can load it up with almost any software (that is, teach it things). Thus, the prefrontal cortex seems to have evolved for solving novel hard problems, with chess being just one of an endless string of problems it can solve.

From this perspective there might not be anything special at all about our ability and tendency to think about the social world. Other people can be thought of as a series of hard problems to be solved because they stand between us and our reptilian desires. Just as our prefrontal cortex can allow us to master the game of chess, the same reasoning suggests that our all-purpose prefrontal cortex can learn to master the social game of chess—that is, the moves that are permissible and advantageous in social life. From this perspective, intelligence is intelligence whether it’s being applied to social life, chess, or studying for a final exam. The creator of one of the most widely used intelligence tests espoused this view, arguing that social intelligence is just “general intelligence applied to social situations.” This view implies social intelligence isn’t special and our interest in the social world is just an accident—a consequence of the particular problems we are confronted with.

One of the standards we can apply to determine whether a human characteristic is accidental or not is its universality. I would guess that less than 10 percent of the world’s population plays baseball, making it a good candidate for an accidental ability. Almost everyone could learn to play, but few do. In contrast, standing upright is a human universal. Learning language of some kind is nearly universal. So is reasonably good eyesight. In a study of more than 13,000 people, 93 percent had good eyesight. As a back-of-the-envelope calculation, 93 percent seems like a reasonable benchmark to say something might have been significant enough in its own right to promote evolutionary adaptation.

From that perspective, can we conclude our sociality is an accident if more than 95 percent of people report having friends? If you take an alien’s-eye view, friendship is a quirky phenomenon. Every friend begins as a stranger to us, typically someone we share no genes with, possibly representing an unknown threat. And yet this person may be someone we ultimately choose to disclose our innermost secrets and vulnerabilities to, or depend on more than anyone else in the world. Friendship has been documented in only a few species, but it is nearly universal in humans. Perhaps we can acquire more resources if we have friends. Perhaps they can be seen as a means to an end. If so, we should keep track in any friendship of how much we give and receive in order to ensure that we are getting our due (and hopefully more). Yet the closer friends become, the less they tend to keep track of who has done more or less for one another. Often, a friend’s primary value is the comfort of knowing we have friends. Despite the various ways friends can be directly useful to us, the fact that our friends are our friends is often an end in itself.

And then consider Facebook. There are more than a billion people with Facebook accounts. Facebook is the most commonly visited website in the world, ahead of Google, Yahoo!, eBay, and Craigslist. The Internet dominates our lives as no technology has before. And the place we go to most often is Facebook. That’s because Facebook offers the best deals on . . . nothing. If Facebook were a religion (and some argue that it is), it would be the world’s third largest behind Christianity (2.1 billion) and Islam (1.5 billion). Americans spend 84 billion minutes per month engaged in religious activities—and 56 billion minutes on Facebook.

What Facebook does provide is an efficient way to stay connected with the people in our lives. It allows us to keep in touch with people we don’t get to see as often as we want or to reconnect with people from our past or to relive the fun of last night’s party with all our friends who were there. Is it just an accident that the single most successful destination on the Internet, or anywhere else, is a place entirely dedicated to our social lives?

If our sociality were an accident, simply another use of our big brains to achieve our selfish ends by manipulating others, would we altruistically help others in need whom we will never meet, who will never know of our good deeds? We give to others for many reasons, but one reason is that we are wired to feel empathy and compassion for the plight of others. When we see others in need, at least some of the time we think, “Something must be done.” Apparently this kind of compassion happens quite a bit. In the United States alone, we give an average of $300 billion a year to charities worldwide. That is an awfully big accident.

If social intelligence were a random application of our general intelligence, we would expect to see the same brain regions associated with both kinds of intelligence. That would be a sensible story if it were true, but it isn’t. The brain regions reliably associated with general intelligence and its related cognitive abilities, like working memory and reasoning, tend to be on the outer (or lateral) surface of the brain, whereas thinking about other people and oneself utilizes mostly medial (or midline) regions of the brain.

Part of what makes it hard to believe that social cognition and nonsocial cognition depend on different neural machinery is that these two kinds of thinking don’t feel very different when we use one versus the other. It’s not like the change we feel when speaking in our native tongue compared with speaking in a recently learned language. It’s not like the distinct experiences we have when solving a math problem and when imagining being a superhero flying through the air. These differences feel really different to us. But when we switch from thinking socially to thinking nonsocially, we feel as if we have simply changed topics, rather than changing the way in which we are thinking. But that does not mean the differences between social and nonsocial thinking aren’t real. It means only that the differences aren’t conspicuous to us.

We do have at least one way of intuitively appreciating differences between social and nonsocial thinking. Most of us subscribe to the common wisdom that book smarts and social smarts rarely go together. These two kinds of intelligence seem to require different abilities, and the brain has separate networks to support them. A recent study of children with Asperger’s disorder brings this distinction home. Asperger’s is considered to be a milder version of autism, but it is associated with many of the same deficits in social cognition and social behavior. A group of children with Asperger’s actually performed better on a test of abstract reasoning than age-matched healthy children. If social intelligence and nonsocial intelligence compete with each other, like the two ends of a seesaw, then it makes sense that deficits that take away some of the strength and power on one end of the seesaw will give the other end greater influence.