Women in the Nazi killing fields

German women witnessed, helped and participated in the genocide 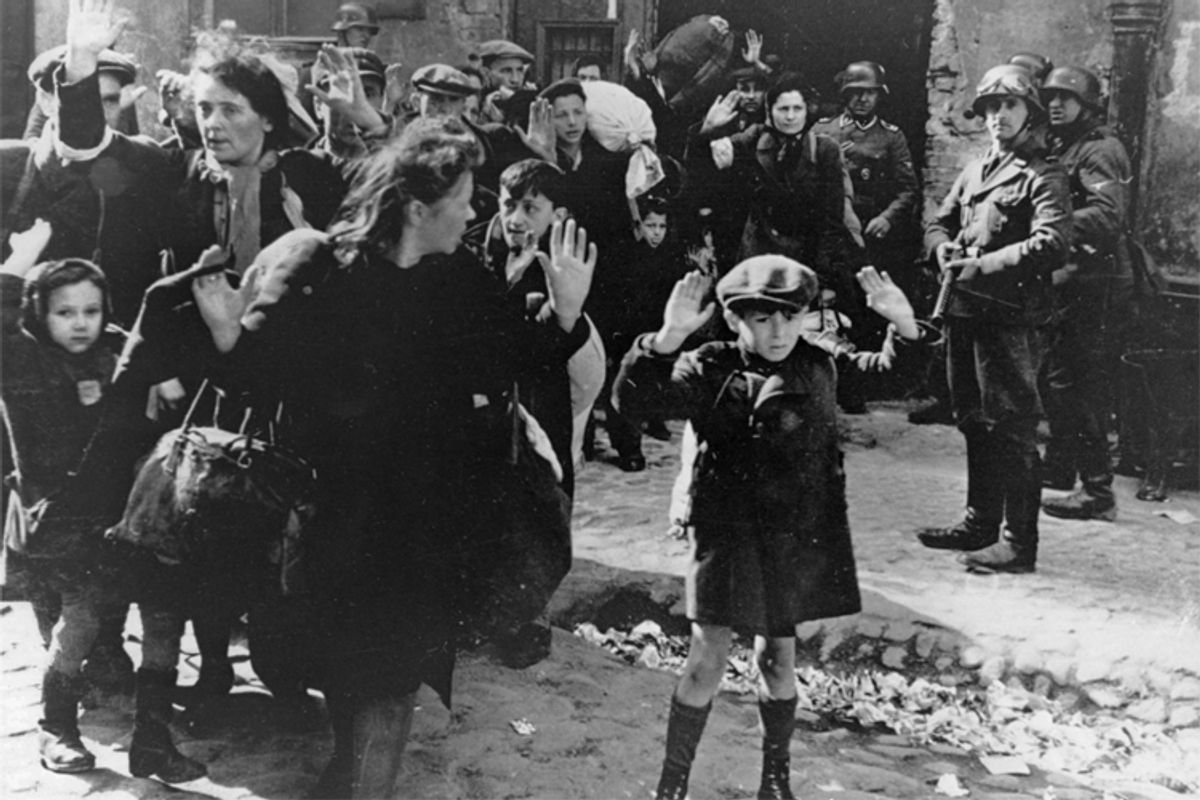 Jews are rounded up by the Nazis in Warsaw, Poland during the German invasion in World War II, 1943. (AP)
--

The Nazi policy of ghettoizing Jews began in Poland in October 1939, a month after the start of the war. Over time, the ghetto took on many forms and uses. In the villages the ghettos could consist of a few streets behind the main road, demarcated by some barbed wire. Viewing the Jews as a racial threat and an enemy, the Germans incarcerated them as a segregationist and security measure. Any facility could serve this purpose. German military commanders and SS and police officers would arrive in a small town such as Narodichi, Ukraine, announce that a ghetto would be formed, and demand that the Jewish population report for registration. In Narodichi, Jews were brought to a local club; elsewhere they were brought to a school, factory barracks, or synagogue, or even locked in abandoned railway cars, while plans for the mass shooting or deportation to a camp were made. It could be days, weeks, or months before these plans were carried out, depending on available SS and police forces, the whims of local officials, and the orders of higher-ups such as Heinrich Himmler and his regional deputies. In the interim, local German officials, Poles, Ukrainians, Lithuanians, and others “traded” with the trapped Jews, who were forced to give up their personal possessions — everything from houses to coats and boots—for a loaf of bread or some firewood. Skilled Jewish laborers were selected from the ghetto population and assigned to heavy labor, such as road construction, and to war-related industries in mining, textile, carpentry, and metalworking. Though these Jewish-only incarceration sites were often referred to as ghettos, they were in fact way stations to sites of mass murder, as well as “death crates,” in Goebbels’s term, since famine, typhus, and suicide took the lives of hundreds of thousands who were boxed into them.

The German showgirl Brigitte Erdmann also had her “ghetto” experience in Minsk. Among the male admirers who attended her performances was a senior commander in the Organization Todt, a militarized construction agency that was a primary exploiter of Jewish labor. The German commander promised the showgirl that on their next date they would go to the ghetto. In Minsk, the ghetto was fenced in with barbed wire six feet high and guarded by two watchtowers. With some seventy-five thousand registered Jewish inhabitants at the outset, the ghetto was less than a square mile in size, spanning thirty-four streets lined with one-and two-story wooden structures and bounded by the Svisloch River and the old Jewish cemetery. An additional thirty thousand German and Austrian Jews were housed separately in a special section of the ghetto. Waves of mass shootings and executions in poison gas vans reduced the ghetto population by two-thirds. In the autumn of 1942 there were some nine thousand Jews left, mostly laborers but still some non-working women, children, elderly, and the infirm. Close to eight thousand of them would also be killed in 1943 as the Minsk ghetto was transformed into a labor camp.

Showing off his authority, appealing to the showgirl’s desire for danger, the commander assumed that it would be impressive to “slum it” in this forbidden part of town. And Erdmann fell for it, writing home to her mother how she looked forward to the date. A similar courtship that occurred on the grounds of the Cracow ghetto was captured in a series of photographs showing a smiling young secretary and an SS man in a picturesque carriage touring the ghetto.

A young teacher in Poland on a Hitler Youth training program wrote home about what she witnessed in the Plöhnen ghetto in July 1942. Though the two hundred young women on the tour had been taught about Poland as a place of “filth, laziness, primitiveness, fleas, lice and scabies,” she was not prepared for what she saw. Just imagine this, she wrote to her parents — you go along the street and come across houses with the windows and doors boarded up, but inside is the noise of people constantly moving and murmuring. A large fence surrounds the houses, but the fence does not reach the ground. You look down and see feet shuffling below, some bare, some with slippers, some in sandals, others in shoes. It smells like a mass of unclean people. If you stand on your toes and peek over the fence, you see bald heads. Then suddenly you realize that it is a ghetto, and that all those people penned up in there must be Jews. One Jewish cobbler at his work “who smiled sadly” made her anxious and confused. She was relieved when she and the other girls left town. That disturbing ghetto scene was behind them. She could put the “disappearing” Jews out of her mind.

Peering into the ghetto was more than a gesture of curiosity. It was an act of voyeurism that affirmed German superiority and the “new order” in the East. To a German observer, the world of the eastern Jew was that of an exotic, distasteful native. In the confines of the ghetto, the threatening “other” had been defeated and was being eradicated. In German thinking, Jews were a species verging on extinction, and their inevitable demise evoked a cruel fascination and pride. A female journalist reported on the Lodz ghetto as an “unreal city” of Jews in “greasy kaftans,” while a student wrote home that the “streets and squares swarm with Jews roaming around, many of them criminal types. What are we to do with this vermin?” Leaving the ghetto was likened to a return to civilization, a regaining of one’s control and place among the powerful. The daughter of the Nazi district chief of Warthegau, Poland, wrote to her fiancé about her adventures in the Lodz ghetto:

It’s really fantastic. A whole city district totally sealed off by a barbed-wire fence . . . You mostly see just riff-raff loafing about. On their clothes, they have a yellow Star of David both behind and in front (Daddy’s invention, he speaks only about the starry sky of Lodz) . . . You know, one really can’t have any sympathy for these people. I think that they feel very differently from us and therefore don’t feel this humiliation and everything.

For the young women who were assigned to the East or who volunteered to go—to fulfill their ambitions and the regime’s expectations, to experience something new, and to further the Nazi cause — witnessing the realities of the Holocaust had usually several effects: it hardened their determination; it confused or eroded their sense of morality (as is clear in the assertion that the Jews in the ghetto “don’t feel this humiliation”); and it triggered the search for outlets to escape what was unpleasant or repulsive, for opiates such as sexual pleasure and alcohol. Vodka flowed in nightly parties with, as one secretary recalled, the “nice lads in the office.” Moral transgressions seemed to go unnoticed, or at least unpunished. Scenes of unfettered greed and violence were common. Those who tried to stay away from what was happening around them found few places untouched by the war’s devastation, and little solace.

Interaction with Jews and mass murder entered into these women’s everyday lives in unexpected but recurring ways. Ingelene Ivens, the young teacher posted near Poznań, Poland, was shocked when she looked out from her one-room schoolhouse at the playground one day. Two emaciated Jewish laborers who had fled from a nearby camp were standing there, frightened and seeking some refuge at her school. Perhaps they assumed that children would be sympathetic. Instead the children shouted at them, and one boy threw rocks. Ivens intervened and scolded the rock-thrower while the Jewish men fled. A German Red Cross nurse recalled a day in Lviv when she and other nurses were walking around town and decided to go to the old Jewish cemetery. Suddenly the nurse realized that she was treading on a fresh mass grave only loosely covered. Her foot had sunk into the earth — “it stuck on me, that was unpleasant.” When a group of secretaries picnicked in the woods near Riga, they smelled the stench of the fresh mass graves. They decided to choose another spot. In the town of Buczacz, Ukraine, an agricultural overseer’s wife noticed that the water tasted strange and realized that Jewish corpses had polluted the ground water.

Excerpted from "Hitler's Furies: German Women in the Nazi Killing Fields" by Wendy Lower, to be published on Oct. 10, 2013. Copyright © 2013 by Wendy Lower. Used by permission of Houghton Mifflin Harcourt Publishing Company. All rights reserved.

Wendy Lower is the John K. Roth Professor of History at Claremont McKenna College and a research associate at the Ludwig Maximilian University in Munich.