J.B. MacKinnon: We can make the world wild again 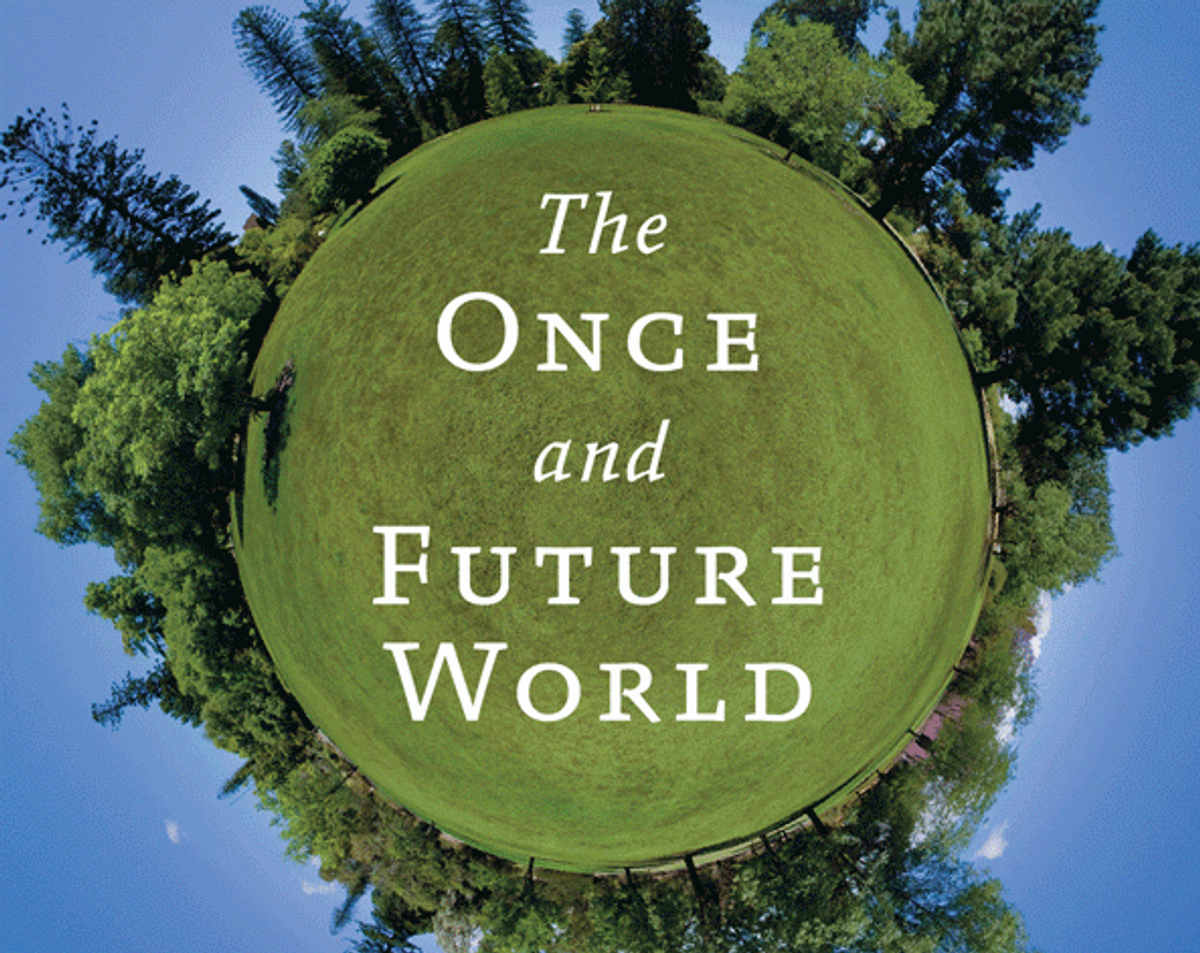 Almost nothing that we think of as "nature" exists as it would have if humans weren't around. Even what seem to be the most untouched or wildest places on Earth have been shaped by human impact.

This shouldn't be a surprise, writes author J.B. MacKinnon in his new book, "The Once and Future World: Finding Wilderness in the Nature We Made." We've introduced species to new places, eliminated them from others and altered the landscape to such an extent that, from our current perspective, it can be close to impossible to recognize just how much things have changed.

Best known for his role in the local food movement, MacKinnon is the co-author, along with Alisa Smith, of 2007's"The 100-Mile Diet." That book followed their attempt to spend a year eating only that which was grown within a 100-mile radius of their apartment in Canada. "Rewilding," the subject of his new book, may be a less familiar movement, but it has similar potential to change the way we interact with the world around us.

MacKinnon spoke with Salon about his case for allowing a little more "wild" into our modern lives. This interview has been lightly edited for space and clarity.

What do people tend to get wrong when we talk about the idea of wilderness?

Is there a better term we could use?

What I’m leaning toward now is more the idea of “wild” places. There still are places where the rhythms of nature and of wild creatures are still in play. But we can’t really call them wildernesses.

Wilderness has become a controversial idea, mostly because of the myth that the first European explorers to reach America found a mostly untouched wilderness. That's not true -- Native Americans lived everywhere from the Arctic to the deserts -- but it doesn't mean we have to throw out the idea of wilderness altogether. We've always needed places that can make us feel small and remind us that we aren't the center of the universe. The difference today is that we have to choose to keep such places wild, or they really will disappear.

The idea of nature, too, is something you say we get wrong -- you refer to it as an “illusion of nature.”

In the case of nature, I think we tend to think of it as that which is separate from human life. Nature begins where the artificial world of human life ends. And it’s not really like that at this point. Nature is something that’s profoundly shaped by the things that we do to it over time. And often the results of that are completely invisible to us at the moment. We can be looking at a mountainside, and we can see a forest, and we can see birds flying overhead, and we can say, “Well, that’s nature.” But it might be the result of transformations over hundreds of years, all of them driven by human activities. So at that point, is it still nature? It becomes very difficult to make these words work for us in the way that they used to.

When we look at nature and don't see any obvious signs of human impact, we tend to think that must be the way it's always been. That's almost always an illusion. Most of the world has been radically transformed by human actions, but those changes are largely invisible and that history is usually mostly forgotten. To know what nature is today, and what it can be in the future, we need to know what it was like in the past.

Can you explain what you mean when you say we live in a “10 percent world”?

That one’s a lot clearer. Over the last 15 years or so, there’s been a lot of research done into historical ecology, which I think of as just the history of nature. And a lot of these things look at specific species or groups of species, and their abundance in the past versus today. It’s remarkable how many of those come up with numbers suggesting that there’s been a 90 percent decline --  in most of the fish species that spawn in rivers and live in oceans, and in most of the species that were formerly abundant.

You can measure the reduction in what I think of as the visible, experiential aspect of nature over time. And my impression, having read dozens of these studies, is that if you were to walk out into nature as it was in the past, it would feel dramatically different. To say that we live in a 10 percent world at this point is a measure not only of the actual reduction in species’ abundance and variety, but also in the way we experience nature. I think the natural world as we experience it today is a shadow and an echo of its former self.

That “former self” was also a much more dangerous place for humans, as you write. What do you make of the argument that a lot of the things we’ve lost, we can more or less live without?

We can live without a lot, but we live in an impoverished world, both ecologically and experientially, when we choose to do so. There are a lot of animals that are dangerous, but they’re certainly not impossible to live with. In fact, in most cases there are people living cheek by jowl with those animals somewhere in the world. What struck me as I read through the history is that it isn’t typically the fear of the animals, or the threat of carnivores and predators, that drives us to wipe them out. We usually wipe them out for other reasons -- potential conflicts with livestock is one of the biggest ones.

It’s only after they’re gone that they become these terrifying creatures that we don’t want to bring back into our world. So the difference is that when we’re living with these animals, we have the experience of living with them, and we understand how to live with them. We start to figure out the rules for how to live with them, and that makes it possible to do so. Once they’re gone, they’re just a frightening mystery to us. And it becomes difficult to convince ourselves that we could live with them again.

Also along those lines, you write that the “most uncomfortable lesson to be taken from the history of nature is that we can survive -- thrive, even -- in a degraded natural world.” Is 10 percent as bad as it gets? What’s the bare minimum that we actually need to survive?

I don’t think we know what the bare minimum state of nature is that we could live in. But I think a lot of people feel that we will change our ways only when we’re forced to by some ecological catastrophe. And from looking at the history of the natural world,  I just don’t see any evidence that that’s likely to occur until things have been really pushed, to an extremity that we haven’t seen anything like to date. If you look at North America, it’s still a terrifically wild place, in comparison to Europe. So there’s no reason to believe that we couldn’t turn all of North America into Europe -- in an ecological sense -- and still be living quite comfortably here.

So I think we need to get rid of this idea that all we have to do is wait for some kind of ecological tipping point to teach us to live, and to teach us to change our relationship to the natural world.

So that leads to the idea of “rewilding.” Can you talk a bit about that movement?

First, I guess I have to lay out my definition of rewilding, because there are a number of different ones. I just use the simplest definition, which seems to be the one that people are working with more and more: “making a place more wild,” or “making it wild again.”

Rewilding is quite different from traditional conservation or ecological restoration. If traditional conservation was about protecting places or species from being wiped out by human activity, then rewilding in a sense is a proactive version of that. It’s taking places that have been destroyed, or taking species that have been eliminated from a place, and bringing them back to a wilder state. So it’s quite dramatically different from conservation, though it’s in keeping with the same set of values.

I will say it’s also not ecological restoration, because most people’s impression of restoration is that it’s an attempt to take a place and restore it to a condition exactly as it was in the past. As you can see from the examples I gave in the book, that’s basically impossible in most places on Earth. Rewilding is really about using the past as a guide to help us determine how we might make a place wilder again -- to bring back the abundance and the potential nature has to be abundant, and to be diverse.

Where exactly is rewilding happening?

It’s happening all over the place, in small ways. And in a few places in big ways. Every time a person hangs a birdhouse in a backyard, they’re rewilding. It can be as small-scale as that, or as efforts people are starting to make such as leaving a patch of their backyard completely untended by human hands, to create a kind of “micro-wilderness” for insects, butterflies, birds and reptiles.

Then there are more specific efforts, like attempts to bring back species to places from which they’ve disappeared. One of the most famous of those would be the return of wolves to Yellowstone National Park in 1995. In 2014 in Banff National Park, in the Canadian Rockies, they’ll be reintroducing bison to the mountains. There’s a lot of these sorts of efforts being undertaken to rewild species.

And then there are these very broad rewilding proposals, such as the Yellowstone to Yukon conservation campaign, where they’re trying to create corridors of protected areas. The idea is to create this kind of very, very large-scale landscape that allows continental-scale movement and migration and freedom to roam for wild species. They have those sort of large-scale proposals for almost every continent at this point.

Do you see a connection between this movement and the local food movement? Both seem to have the same kind of spirit behind them.

For me, that was actually the stepping-off point for this book. When I was doing the 100-mile diet as a kind of thought experiment, I was finding it difficult. I was constantly aware of the fact that all kinds of indigenous people had lived here for thousands of years eating a primarily local diet, and I wondered how they had managed to do it. So I ended up digging into the ecological history of the place where I live, and discovered that there was this tremendous abundance in the past. This incredible natural abundance that people were able to draw on and feed themselves with. And that really was the stepping-off point for me to start to think about what nature used to look like, not only where I live, but around the world.

One other thing I think is quite similar between the local foods movement and rewilding is that both allow people to engage with the place they live in. One of the most remarkable things to watch since "The 10-Mile Diet" came out was just seeing how, as the local food movement built, people used that idea to change the place they live in. In a hands-on way, they started guerrilla gardening, or urban farming, or rooftop farming, or bringing bees and chickens back into the city. Rewilding is very much the same -- it’s something that is cerebral at one level, but a way that we can engage with, and play with, the places we live in an imaginative way.