Killed over a movie ticket: How law enforcement hurts people with disabilities

A man with Down syndrome died in a confrontation with police. Officers need better training before more people die 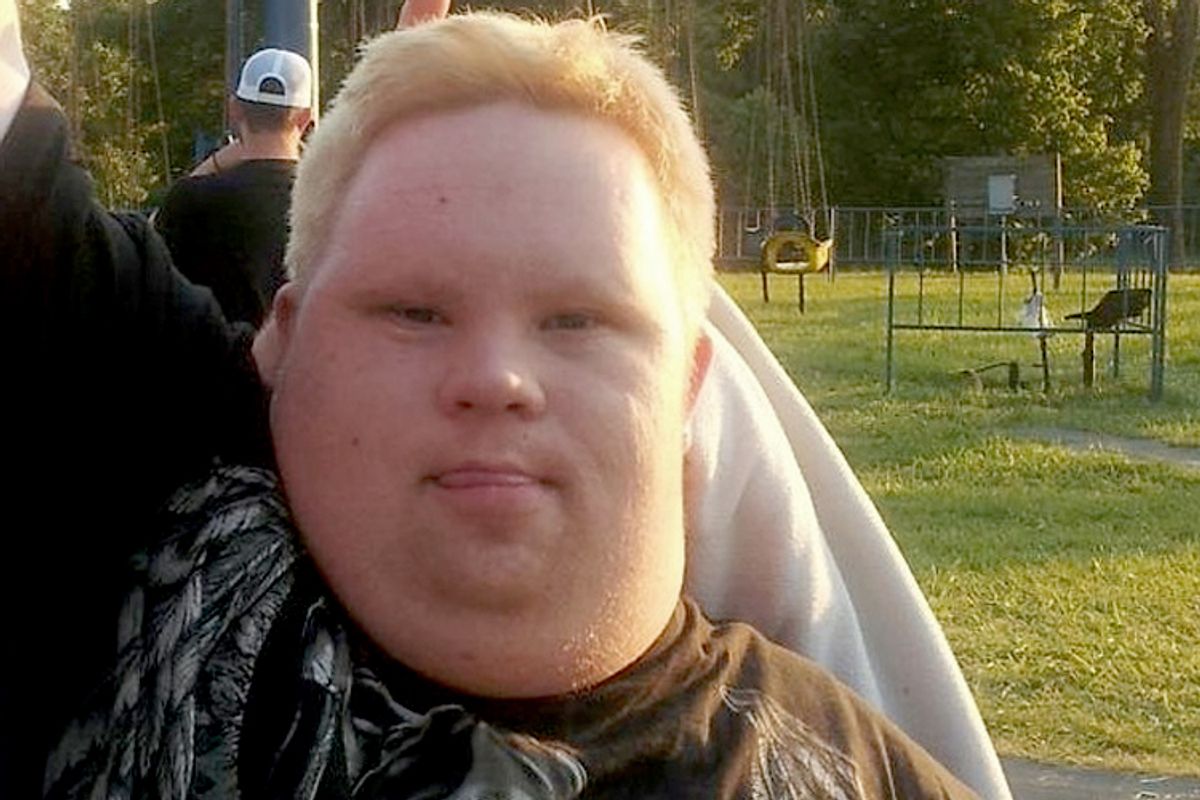 On Jan. 12, Robert “Ethan” Saylor of Frederick County, Md., a 26-year-old man with Down syndrome and an IQ of 40, died of asphyxiation after a confrontation with three off-duty police officers. He was being restrained for attempting to see “Zero Dark Thirty” for a second time without a ticket. According to witnesses, Saylor's last words included “it hurt” and “call my mom.”

Saylor's ashes now sit in the family's living room while the three officers continue their usual shifts. No charges have been filed.

Saylor’s death stands out as especially tragic, not only because he loved police officers. Despite testimony from Saylor's aide that she told the officers to “be patient” and let her “handle it,” a local grand jury decided not to file criminal charges. In late July, the federal government finally took note and opened an investigation into whether police violated Saylor's civil rights.

This slow-moving process reveals something disturbing: Our law enforcement system often fails to protect people with intellectual and developmental disabilities and, in some cases, is complicit in their abuse.

Saylor is far from the first person with special needs to be harmed by police. In 2010, Steven Eugene Washington of Los Angeles, a 27-year-old man with autism, was shot dead after his inability to follow police's directions made officers suspicious. He reached into his waistband, leading officers to fear he had a gun; he did not. In 2010, North Miami Beach police shot Ernest Vassell, 56, a man with mental disabilities, who was playing with a toy gun that they believed was real after he, too, had difficulty complying with officers’ commands.

Police can misinterpret the behavior of people with special needs because they do not even recognize that the person has cognitive or intellectual impairments. “We as human beings tend to approach everything through our own prism, and if someone is acting extremely peculiar, we're immediately frightened,” said James Mulvaney, a professor at New York's John Jay College of Criminal Justice and an autism advocate.  “If you're a cop, you're probably thinking this person is a danger.”

Police academies often devote only a brief amount of time to studying disabilities, and deal with physical, mental and other disabilities all together with little time specifically focused on developmental or intellectual ones, according to Leslie Morrison of Disability Rights California. "Those are very different categories."

“Most officers have more knowledge about mental illness," than about developmental or intellectual disabilities, said Leigh Anna Davis of the Arc, a community-based advocacy group for people with such disabilities.  "In fact, they may think they are the same thing.”  She added, “Without face to face contact, it’s hard to help officers realize the need to change their behavior or ways of interacting.”

People with autism may be at elevated risk because, unlike with people with Down syndrome, there are no tell-tale physical features of the disability. As a result, when they do not quickly follow police directions, they are often misconstrued as being disobedient or suspicious.

In fact, because it was so apparent that Saylor did have special needs, his case is all the more “confounding,” said David Whalen, the New York statewide project coordinator of disability awareness training. Whalen runs one of the few programs in the country that exhaustively trains law enforcement in recognizing and appropriately responding to people with a range of disabilities. “Down syndrome is not hidden. The lack of recognition of the individual having a disability is baffling to me,” he said.

Unfortunately, Frederick County officers not only apparently failed to comprehend what Saylor’s disability entailed, but also quickly made it a physically aggressive situation, allegedly refusing to listen to the aide’s plea for patience.

Police officers are often taught to make quick decisions. “Law enforcement training tends to focus on the fast rather than the slow, to charge ahead rather than pull back,” said Mulvaney. As opposed to teaching police officers to prevent or minimize conflict, their education often stresses a “control and react” philosophy. “You're moving fast. You're more apt to make mistakes.”

But fast and aggressive is the worst possible approach for interacting with people with special needs. People with cognitive and verbal challenges can have difficulty following directions, especially quickly spoken ones.

Some critics see the lack of police training in situations involving the special needs population as not merely an oversight, but a systemized bias. Mulvaney notes that police are largely untrained to work with a disability like autism, which is pervasive (one in 50 children are diagnosed with it, according to the latest studies) and growing. However, “when there's a new drug, we train officers,” he said. “Every cop in the country knows about molly, but we're not training them about disabilities.”

However, Jim Pasco, executive director of the Fraternal Order of Police, said that "while there's certain standardized training, an officer in Ohio may not be trained the same way as one in Duluth." As a result, "You can't can't make judgments about police training when it can be different state by state."

In fact, he remains skeptical regarding Saylor's case. "Nobody wants to see anyone hurt or killed in avoidable circumstances, but I don't know sitting here if those circumstances were avoidable, and neither do you," he said. "I feel a lot worse for the people on the hook for this stuff. Police have the same right to due process. We can't rush to judgment." The Frederick County Police Department has not responded to Salon's request for comment.

Unfortunately, people with special needs also face obstacles when they attempt to report a crime. A study by the Disability and Abuse Project found that 70 percent of people with disabilities had been victims of abuse, with 50 percent of these individuals having suffered from physical and 41 percent from sexual abuse. Fewer than half of victims with disabilities filed reports, and when they did, fewer than 10 percent of alleged perpetrators were arrested.

“It’s an epidemic,” said Morrison. “It's a silent crime because they often go unreported. It may be the victim doesn't know they have been victimized. If they do know, they are often afraid to report.”

Just last year, Ryan Gabrielson of California Watch wrote that California police failed to perform basic investigations in 36 reports of rape and molestation from people with developmental disabilities from 2009 to 2012.  Gabrielson said some officers closed investigations when victims got times and dates incorrect, even though answering chronological questions can be very difficult for people with some disabilities. In other cases, rape kits were not administered when they would have been based on the same accusation made by a neurotypical person.

“We tend to see officers in community agencies not investigate as rigorously crimes against people with psychiatric and developmental disabilities,” said Morrison, who led the investigation into the sexual abuse cases.

As with confrontations with people with special needs, officers often move too fast when taking reports from people with special needs. “It takes [a long time]. It can require assisted technology,” said Morrison. As a result, police “often find them not credible.” She frequently sees people who have been victimized multiple times but hesitant to report because “the first time, the response by law enforcement was less than positive and that deters them from reporting a second time.”

But it's not just police who misunderstand people with special needs. “According to how society serves people with intellectual and developmental disabilities, we don’t seem to place high priority on providing the support they need,” said Davis. She cites the long waiting lists for services and low wages for direct support professionals because federal money is directed to other issues.

Law enforcement just reflects the larger stigma against people with developmental and intellectual disabilities. “This is the most discriminated population in America,” said Whalen. “It’s systemic; it’s not just that isolated issues exist.”

The discrimination is also evident in how little attention Saylor's case has received. Few papers outside of the local sections of the Baltimore Sun and the Washington Post have devoted attention to the story until very recently.

“I don't know why it doesn’t get attention,” said Morrison. She said that society is less vigilant when it comes to abuse of people with disabilities than it is with child or elder abuse. “All I can think is that we as a population don't want to believe we would victimize them, but they're perfect victims [for abusers] because they can't speak up and they're isolated.”

The Saylor family, though, has at least enjoyed some progress toward justice. They have successfully petitioned Gov. Martin O’Malley to create a state commission to improve first responder training for interactions with people with intellectual and developmental disabilities. In fact, Maryland is on the verge of becoming the first state to mandate police training for people with disabilities.

Yet, the governor has yet to consent to reopening an investigation into Saylor’s death. Furthermore, Pasco does not predict any major foreseeable overall changes for police education. "Until something's been fully investigated, you hold," he said. "You wait for the legal system to run its  course. I'm content to wait for the results of the investigation."

However, Mulvaney is more hopeful that Saylor's death will force changes in police training and awareness of people with intellectual and developmental disabilities. “Now, they are on notice,” he said. “It's a shame it took the loss of someone's life.”