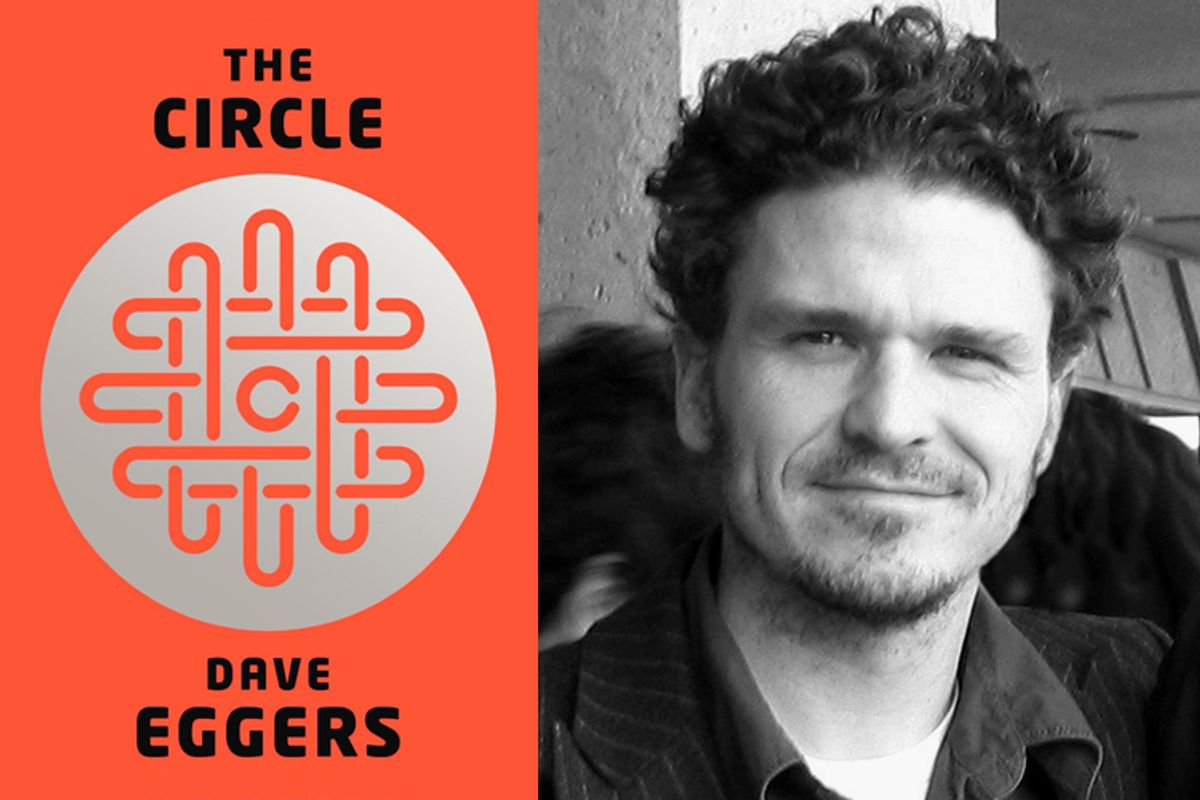 I get a sort of high when people retweet me.  Let’s be honest: We all do. It’s pretty human to want to be liked, and more important, to be paid attention to.

But last month, two things happened that made me realize just how addicted to social media I’d become.

“You need to build the ability to be yourself and not be doing something,” he said. “That’s what the phones have taken away.”

Second: I read "The Circle" by Dave Eggers (forthcoming from Random House on Oct. 8) and it scared the crap out of me. So much so that I decided to take a break from social media. I asked one of my best friends to change my passwords, because I didn’t trust myself to resist the siren call of endless chatter and information and likes and retweets and comments.

In Eggers' novel, a young woman named Mae gets a job at a company called the Circle. The business is clearly based on a combination of Google and Facebook and Twitter. It’s an ideal place to work. Employees go to huge, lavish parties. There are tons of groups dedicated to different interests. The company provides free comfortable dormitories for people who work late and don’t want to leave the campus. But as the book goes on, it becomes very clear that The Circle has dark motives.

Privacy is the enemy. People should be able to see anyone or anything in the world. The company develops a tiny camera that most people won’t notice — and that leads to government officials, and then Mae, deciding to wear the camera everywhere they go. It’s reality TV on steroids. Mae, who works in the Customer Experience department, is expected to send out surveys and follow up with customers until the Circle gets the highest possible score. She’s also required to pay attention to multiple computer screens at a time, including one displaying the Circle's social networking function. People get offended if she doesn’t respond to their invites, and she’s inundated by a ridiculous number of requests. Her ex-boyfriend (Mercer) and parents are among the few people who start to see the Circle for what it is: a company that’s making people obsessed with being connected to the world all the time, no matter the cost.

“There’s this new neediness — it pervades everything,” Mercer says to Mae at one point.

“You know how you finish a bag of chips and you hate yourself?” Mercer asks Mae.  “You know you’ve done nothing good for yourself. That’s the same feeling, and you know it is, after some digital binge. You feel wasted and hollowed and diminished.”

The novel does a perfect job of capturing how inundated we are by the need to participate in conversations on the Internet. Mae stays up most of the night one night trying to get her score higher by liking and responding to posts. I’ve spent plenty of nights endlessly refreshing my Twitter and Facebook feed while I’m reading or writing, in the hopes of not feeling so alone. I follow 1,615 people at the moment. Some of those people are prolific tweeters. That means that while the TweetDeck application is open on my desktop, I’m constantly seeing notifications in the background. I’m always tempted by how easy it is to click a link to an interesting article and fall down a rabbit hole of endless distraction. It’s time to admit to myself that part of the reason I do this is because it’s easier than being stuck in my own head.

Normally I roll my eyes at people who are anti-social media. I’ve made numerous close friends and professional connections through Twitter. I’ve reconnected with old friends on Facebook. Those are good things. But as I kept reading "The Circle" and thinking about Louis C.K.’s comments, I found myself more and more uncomfortable with just how dependent I was. Earlier this month, I actually tweeted: “Now that I’m used to it, I can’t imagine life without social media.” I check Twitter and Facebook on the subway at the stops where my phone gets reception. I check it while waiting for a film to start at the movie theater. And recently I’ve found I can’t walk the four long blocks from the subway to work without constantly refreshing my Twitter and Facebook apps.

Sometimes having time to just think about my life in general or anything I might be feeling anxious about leads me down a road of despair. That’s probably because a lot of times my thoughts are something like “I should write about this. But I can’t do it. I’m reading this book by Jeanette Winterson, and how could I ever write one sentence as good as her worst sentence?” But in order to be a writer, you have to be alone with your own thoughts. You have to cultivate them.

So on Sept. 20 I quit social media entirely for a week. For the first couple of days, I felt disconnected from the rest of the world — and I didn’t like that. Twitter is the primary way I get news about the literary world.

Then I actually started to like being disconnected. I wasn’t as overwhelmed by my inbox. I responded to emails much quicker than I normally do. I didn’t feel any kind of pressure to post something that might entertain those who follow me. I read for longer stretches of time than I normally do. I came up with ideas for various essays I want to write, and most important, I wrote.

Now that I’m back on social media, I’m realizing that the answer isn’t necessarily to deprive yourself. It’s better to find a balance and not think of your life as existing in 140 characters or status updates.

I’ve set up a few rules for myself, too. No tweeting while walking. No checking the phone on the subway. No TweetDeck. It’s far better to check Twitter on the actual website instead of having it open and taunting me all day long. The biggest thing I’ve realized is that I can’t have social media open while I’m writing. I don’t want to become like Mae, sacrificing real-life friendships for the allure of the screen. I want to be aware of the world around me. I want to write about that world. I want to feel more alive, even if that means being lonelier in the process. It’s a book that connected me with myself again — just as books have always done, and always will do.