They ignore a year of hearings and desperate bargaining on Obamacare. Plus: The worst shutdown punditry ever 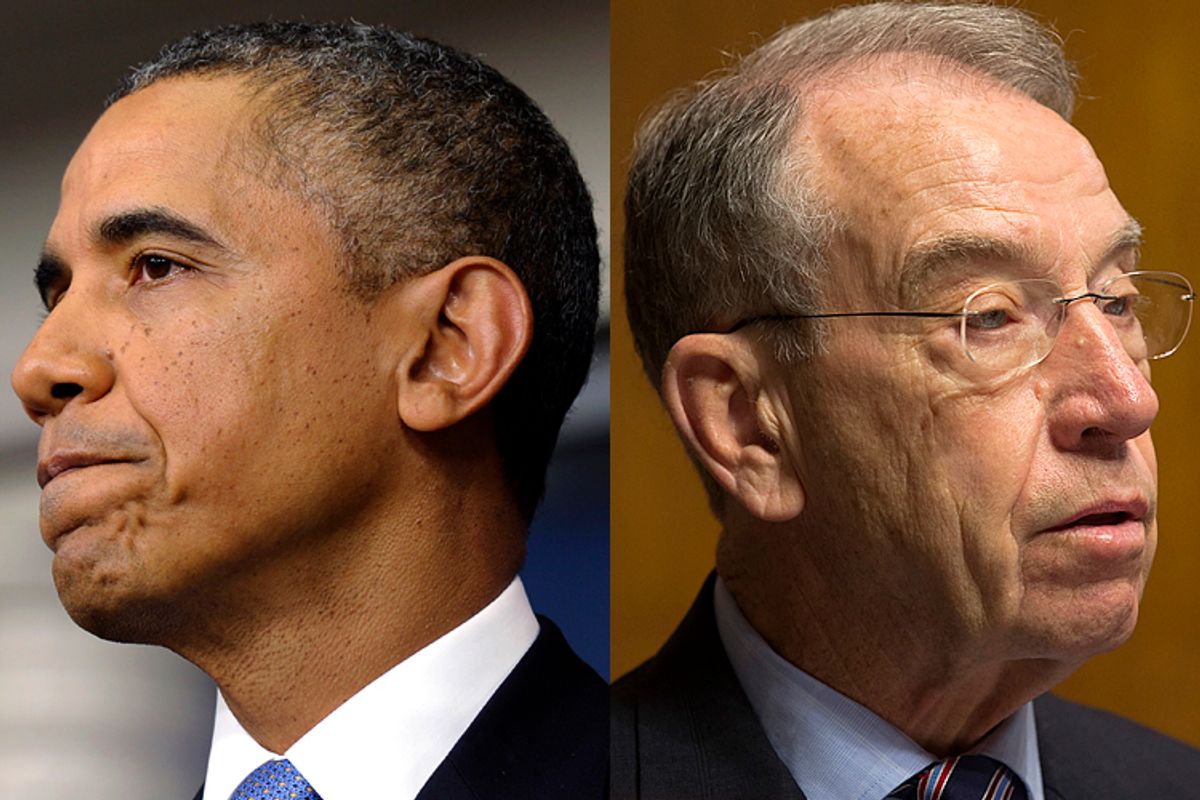 I had the good luck of debating former Newt Gingrich flack Rick Tyler on MSNBC Sunday. It was good luck, because it forced me to encounter one of the ways Republicans are lying to the country about their defund/delay/repeal Obamacare hostage-taking. Tyler insisted shutting down the government was reasonable recourse for his party because the Affordable Care Act was “rammed through in the middle of the night without a single Republican vote.”

I Googled “Obamacare” and “rammed through” to find that’s a regular GOP talking point, of course. I also found the single worst piece of punditry on our current political crisis, by Michael Barone on Real Clear Politics, using the Civil Rights Act of 1964 to indict President Obama and the Affordable Care Act. I’ll get to that in a minute.

First, let me demolish Tyler's claim that the ACA was “rammed through” Congress without deliberation or debate, part of  a pattern of Obama failing to negotiate with Congress. Well, I knew that was a lie, and I said so to Tyler and host Karen Finney. In fact, the ACA was the result of more than a year of congressional committee hearings in which progressive ideas like single payer or a public option were jettisoned, and hundreds of GOP amendments to the law were accepted, in exchange for zero Republican votes. Sen. Max Baucus, in particular, drove an eight-month bipartisan process via the Senate Finance Committee in which he and ranking Republican Chuck Grassley held dozens of hearings, released joint “policy option” papers and finally presided over 31 meetings lasting 60 hours with the so-called “Gang of Six” – Baucus and Grassley plus Kent Conrad, D-N.D., Olympia Snowe, R-Maine, Jeff Bingaman, D-N.M., and Mike Enzi, R-Wyo. -- to try to hammer out a compromise that would attract GOP support. (A Twitter friend shared this helpful history of the Finance Committee’s tortuous process.)

But it wasn’t until I read the Finance Committee summary of its work on the ACA that I fully experienced the inanity of Tyler’s argument. It’s actually painful to read. In fact, it was the administration’s determination to compromise, and to let the centrist Baucus drive the process, that led Democrats to head into the disastrous August 2009 recess without an actual bill they could tout, let alone defend – and that vacuum was filled by Tea Party hatred at town halls that Rep. Todd Akin (remember him?) appreciatively labeled “town hells” for Democrats.

And of course it was August when Grassley echoed Sarah Palin’s death panels lie and claimed Obama wanted “to pull the plug on Grandma.” Still, Baucus worked to reach a deal with him, accepting his amendments to the final bill passed by the Finance Committee, along with amendments by Enzi, Snowe and other GOP members. But he never won a single vote from them. Despite that history of desperate efforts to find common ground and win over Republicans, Republicans lie and say it didn’t happen.

The main reason for GOP intransigence, of course, especially in the Senate, was Minority Leader Mitch McConnell’s widely publicized determination to hold his caucus together to deny the new president any victories on his agenda. On healthcare, in particular, McConnell himself told the New York Times, “It was absolutely critical that everybody be together because if the proponents of the bill were able to say it was bipartisan, it tended to convey to the public that this is O.K., they must have figured it out. It’s either bipartisan or it isn’t.”

Former Utah Sen. Bob Bennett admiringly compared the minority leader to a healthcare reform saboteur in an interview with Josh Green. “McConnell knew the places to go, around the tank, and loosen a lug bolt here, pour sand in a hydraulic receptacle there, and slow the whole thing down,” Bennett told Green.

Against this backdrop, Tyler’s claim that the Affordable Care Act was passed without negotiation is farcical. But if he hadn’t made that silly claim, I never would have Googled “Obamacare” and “rammed through” to find the worst piece of mainstream punditry on our disastrous political dysfunction. On Real Clear Politics last week, Michael Barone had the gall to use the bipartisan coalition that came together behind the Civil Rights Act of 1964 to indict the president for, that's right, “ramming through” Obamacare.

Because Lyndon Johnson worked to get Republican votes for the bill, Barone argued, once it became law, “white Southerners largely acquiesced. Traditional Southern courtesy replaced mob violence. Minds and hearts had been changed.” And that’s what would have happened with the ACA if only Obama were LBJ. Or something.

If Barone really believes “traditional Southern courtesy replaced mob violence” after the Civil Rights Act passed, he needs to get out more. He ought to talk to the siblings of James Chaney, Michael Schwerner and Andrew Goodman, as I did last week, who were murdered in August 1964 after the bill passed; or the survivors of ugly violence at the March 1965 Selma marches, from John Lewis, who had his skull fractured, to the families of Rev. James Reeb and Viola Liuzzo, who were killed for taking part; or the families of Jonathan Daniels or Samuel Younge, or any of the many civil rights martyrs killed after the Civil Rights Act passed.

Sadly, Barone has become a joke. But is it any accident that he casts Obamcare opponents in the role of (vanquished) Jim Crow defenders? Just this weekend an unnamed Republican congressman compared his side to the Confederates who blundered their way into the Battle of Gettysburg. He told the Washington Examiner’s Byron York: "I would liken this a little bit to Gettysburg, where a Confederate unit went looking for shoes and stumbled into Union cavalry, and all of a sudden found itself embroiled in battle on a battlefield it didn't intend to be on, and everybody just kept feeding troops into it," the congressman said. "That's basically what's happening now in a political sense."

Um, OK. I’ve gotten in trouble for pointing to the role of race and racism in driving the GOP’s anti-Obamcare crusade. But I’m not the one comparing them to Confederates or the Jim Crow South.

Whether or not it’s racism, the disrespect for this president continues to amaze me. Tyler himself derisively told me and Finney that “the president doesn’t understand his job, or isn’t very good at it.” That’s pretty rich, coming from Newt Gingrich’s former flack. Neoconfederates or nihilists, take your pick. They intend to destroy this president, and if they have to take down the economy too, so be it.