The name controversy's gone national (even the president's weighed in), and some fans are calling for a change 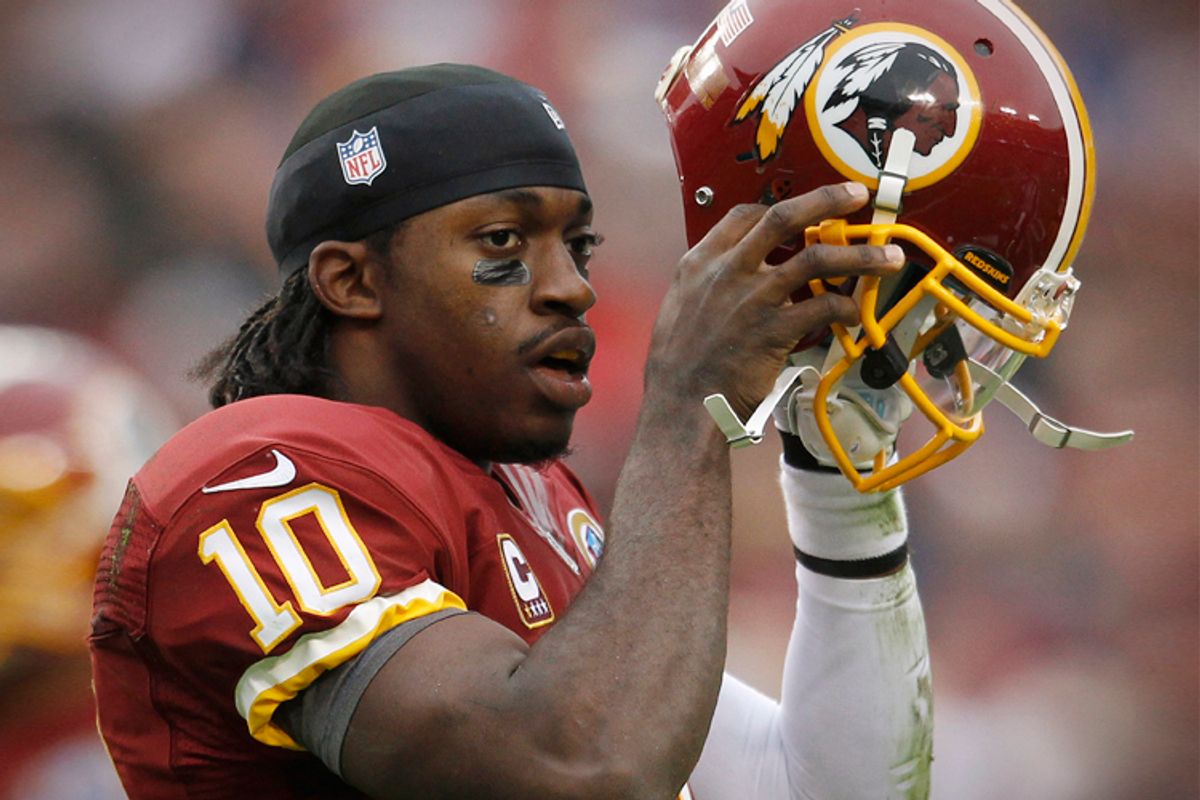 If it weren't for Robert Griffin III, the national controversy over the name of Washington's football team might not be much of a controversy at all.

The increasing chatter around the need for a name change for the Washington Redskins -- with media outlets like Slate and Mother Jones banning the name, and President Barack Obama suggesting that ownership "think about changing it" in a recent interview -- has coincided with the team's recent success, buoyed by ebullient quarterback "RG3." Though the still-young current season has been less successful, last year saw the team making the playoffs for the first time since 2007. And it's brought new scrutiny to a team whose name is a uniquely offensive term for Native Americans.

And so it is that casual football fans or non-fans have had the name in front of them more frequently than ever. It's something of a Catch-22 for the management that's sworn it will never change: "If they were to have a miserable season, that'd be really good for people who want to keep the name," said Jamie Mottram, the director of content development at USA Today Sports Media Group and a blogger about D.C. sports. "The worse they are, the better it is for people who want to keep the name. I can't imagine the fever pitch that will ensue if they were to get really good; if they were to get to the Super Bowl with RG3, it'd be the story."

And Redskins fans seem hopeful that the problem will just go away. Said Mottram: "Being a fan who's a proponent of the name change, there are other fans who accuse you of not being a fan. If you think the name is racist or should be changed, you're not a fan of the Redskins."

The climate is such that Washington Post sportswriter Dan Steinberg told Salon via email: "I've tried pretty hard not to really say anything of substance on the issue and I'm trying to keep my streak going."

Said D.C. sports blogger Mike Harar, who would continue to support the team if they changed their name, "Outsiders maybe don't see that the team has been here for 75 years. It's generations of people who've grown up around the franchise. People think of [coach] Joe Gibbs and Super Bowls and [running back] John Riggins and the good times the city's had when they think of the name. Even though the Redskins would never fly today, everybody loves the Redskins."

To change a team's name is to change in some fundamental way its DNA -- even if the players and management are all the same. And Redskins fans, Harar and Mottram both suggested, view themselves as supporting a storied franchise, even though they'd, of course, never use the term in real life. Supporting the team, said Mottram, meant he currently outfitted his young children in Redskins gear and had, when younger, ignored protests. But today, he said, if the name changed, "I wouldn't be ashamed to root for them. It is a shameful enterprise to root for a team called the Redskins." To be a fan hoping for a name change is to admit that one's own support for the Redskins has been shameful. No wonder so many fans want to keep the status quo.

But just what is the damage of an offensive mascot? Several teams aside from the particularly offensive Redskins retain names that reference Native Americans, including the Cleveland Indians and the Atlanta Braves; many college teams have changed their names, but many more, like the University of Illinois's Fighting Illini, retain them (though Illinois retired the mascot Chief Illiniwek in 2007). Leanne Howe, a professor of American Indian studies at Illinois, noted that even though the school has said the team name is a means of honoring native peoples, people from other schools showed graphic disregard for the dignity of actual Illini people: "We see ourselves hanged by the opposing team or our bodies are on fire. It may be intended as a way of honoring, but what happens is that other people portray them with their necks cut or their bodies torn asunder."

"Here at Illinois," she added, "other teams are killing the Indians."

Whether or not fans of opposing teams are actually depicting native peoples as dead in their hopes to get a win over the Illini, the Braves or the Redskins, they're still framing them as something less than human. The Redskins play against the Bears, the Lions, the Eagles, the Panthers, the Falcons ...

As Chadwick Allen, a professor of English specializing in comparative indigenous literary studies at Ohio State University, noted: "You have native people relegated to the past and made unreal as contemporary citizens. When people hear these names they think of the deeper past, not contemporary people. Other sports teams are named things like the Spartans or animals associated with being aggressive or strong." Naming football teams after Native Americans in the first place is a way to put them safely where they belong, under the control of white management as surreal figures of fun and fantasy, the exact counterbalance to the Paul Revere-like New England Patriots (and this leaves entirely aside the issue of just how offensive "Redskins" is compared to, say, "Illini").

"In the imagination of mainstream Americans, they're still fighting the Indian wars," said Howe. "They only happen to be on the gridiron."

Joanna Hearne, professor of English specializing in Native American and indigenous film and media at the University of Missouri, noted that use as team mascots was specific to Native Americans in sports: "No one would do that with an image of Sambo. Over time with protests from Native American communities, and shifts in education and increasing Native access to media and representation, there is consciousness that this is pageantry of colonialization." In other words, to portray a Native American as a mascot representing athletic talent and, as in the case of the Redskins' unofficial mascot Chief Zee, comic bonhomie, is a process of erasing the humanity of Native Americans and a specific story of their actual slaughter -- per Hearne, "legitimizing title occupation and ownership of land."

And while these may be issues that Redskins fans aren't yet entirely ready to deal with, Native American activists have been dealing with them for a long time -- along with many other pressing concerns. As Hearne put it: "The Native community is really tired of talking about this."