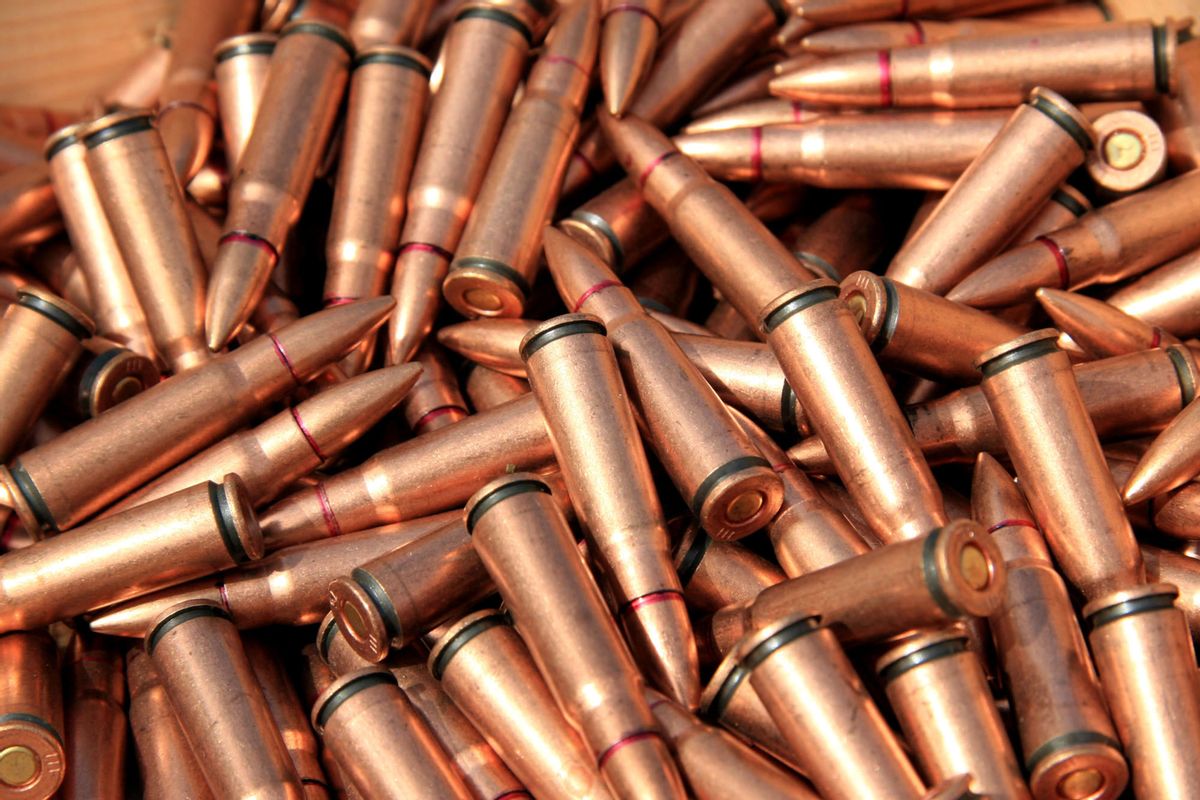 They were people who wanted a gun to fix their problems. They were known to police for assaulting lovers and spouses, using guns in violent crimes and being addicts. They knew that they would fail the FBI’s background checks, so they went online and found private gun sellers who took their cash and asked few questions.

Wisconson’s Radcliffe Haughton was under court order to stay away from his wife Zina Daniel. But he went to Armslist.comin October 2012 and bought a Glock handgun that he used the next day to kill her and two co-workers before commiting suicide. In Illinois the previous April, Dmitry Smirnov also bought a gun on Armslist that he used to kill Jitka Vesel, after stalking her to her job and shooting her 11 times in the parking lot.

Armslist.com is like a Craigslist for firearms. Created by “gun owning and gun loving Americans” in 2009, it takes no responsibility for whatever transpires “in transactions between parties,” it states. Yet it is at the forefront of one of the biggest loopholes in America’s gun laws: private sales that evade FBI criminal background checks.

Thirty-four states allow local online gun sales without the FBI checks that registered gun dealers in every state must conduct. An investigative report from Mayors Against Illegal Guns looked at sales at Armslist.com earlier this year and concluded that “tens of thousands” of people who would have failed the federal checks gt guns anyway because of the private sales loophole.

“Convicted felons, domestic abusers, and other dangerous people who are legally barred from buying guns can do so online with little more than a phone number or email,” New York City Mayor Micheal Bloomberg said. “As our investigation shows, thousands of criminals and other prohibited purchasers are doing just that.”

The Mayors’ study found “the share of criminals purchasing guns on Armslist is nearly four times higher than the share attempting to purchase guns at licensed dealers, finding that “one in 30 would-be buyers on Armslist have criminal records that bar them from owning guns.” It stated, “Our findings suggest that tens of thousands of criminals now use the online private sale loophole to acquire illegal guns.”

This conclusion comes from a remarkable investigation. The mayors wanted to how prohibited purchasers could get a gun online and how often this occurred. They looked at 13,298 “want-to-buy” listings on Armslist.com between this past February and May, and found that 1,430 of the classified ads had phone numbers or emails. Then, using reverse phone number directories, they identified 607 of those people and scanned court records for files that would bar gun ownership, such as felony and drug convictions, or domestic violence convictions of protective orders. They then called these 607 people to verify identities, eliminating six people who either posted the ad for someone else or had the same name as a prohibited person.

What the mayors found debunked one of the National Rifle Association’s talking points. The NRA, which once supported FBI background checks before more recently opposing them, often states that criminals will not try to legally buy guns.

“The report demonstrates that their claim is both false and true,” the mayors countered. “Criminals undeniably do submit to background checks: in 2010 alone, federal and state checks blocked more than 150,000 gun sales to prohibited buyers. But criminals also undeniably avoid background checks—by exploiting the private sale loophole.”

The loophole in 34 states allows people buying guns from another state resident to avoid the federal background check. When comparing the percentage of gun buyers who were stopped by background checks—by gun dealers who ping a database that allows the sale to continue or stops it—the mayors’ found that 3.3 percent of the 600 gun buyers they tracked at Armslist.com would have been stopped. That “share of criminals purchasing guns” was nearly four times higher than those blocked by the FBI’s checks.

States with the private sale loophole have more gun-related violence, the mayors found, citing statistics on women shot to death by intimate partners, law enforcement killed with handguns, assaults and suicide. They point to Missouri as the state best illustrating this disparity. Before August 2007 when the state repealed its purchase permit law, it had fewer firearms homocides, and fewer guns used in crimes were bought in the state.

The mayors want Congress and the federal Bureau of Alcohol, Tobacco, Firearms and Explosives (ATF) to close these loopholes and tighten gun-buying protocols. They point to other comparative risks where the federal government acted to protect the public. At Armslist.com, they found more than 3 percent would-be gun buyers would have been stopped by the FBI checks. The margin of error for that statistic is 1.4 percent, the report noted, meaning that banned buyers could be as low as 1.9 percent or as high as 4.7 percent of those 607 people screened.

In contrast, in 2010 when the federal government recalled more than 2 million Toyotas for acceleration problems, that was an issue for 72 out of 100,000 vehicles, a rate of 0.0007 percent. In January 2013, when Fisher-Price recalled newborn infant sleepers because of mold, that also was a problem in 0.0007 percent of the units sold. When the Food and Drug Administration recalled the drug propoxphene because of a risk of death in six out of 100,000 cases, that was a problem in 0.00006 percent of incidents.

“The 1-in-30 chance of selling a gun to a criminal on Armslist is an order or magnitude greater than these,” the mayors report said, then giving the following five examples:

• A 25-year-old male in Louisiana posted an ad on March 21, 2013 offering to “meet face to face” and promising “cash in hand.” A review of his criminal record revealed that a month earlier, he had been charged with aggravated assault with a firearm, a felony. Two days prior to posting the ad, he had been charged with illegally carrying a weapon, also a felony. A month after posting the ad, he received a third charge, for domestic abuse battery. Each of these offenses was sufficient to disqualify him from possessing firearms.”

• A 25-year-old male in Columbus, Ohio posted an ad on March 24, 2013 offering “cash, ammo, or a combo of both for payment.” Criminal records indicate that he was named as a defendant in 15 felony or misdemeanor cases between 2007 and 2013, including pending charges for aggravated robbery and drug possession and repeated charges of illegal gun possession. He also pled guilty to possession of crack cocaine in 2010, a felony that prohibited him from buying guns.

• A 27-year-old male in Fort Collins, Colorado posted an ad on March 30, 2013 seeking an M&P22 handgun. In 2005, the would-be buyer had attacked his ex-girlfriend and was found guilty of domestic violence harassment; he later violated an order of protection. Both offenses barred him from purchasing or possessing firearms.

• A 35-year-old male in North Carolina posted an ad for an M1A SOCOM 16 rifle on March 27, 2013, insisting on meeting “face to face ONLY.” The would-be buyer had been arrested as a fugitive in Iowa in 2003 and extradited to North Carolina; he was also found guilty of a series of felony chargers, including robbery with a dangerous weapon, in 1996. These offenses rendered him a prohibited purchaser.

• A 27-year-old in Louisville, Kentucky posted an ad on March 28, 2013 in search of an XDM 3.8” handgun, promising “will pay cash.” In 2006, he had been found guilty in Ohio of misdemeanor assault against the mother of his child, which prohibited him from possessing firearms. He had also been convicted twice for drug abuse.

Needless to say the founders of Armslist.com don’t want to concern themselves with any of this and consider it unAmerican to stop anybody from getting a gun. They post this disclaimer, “Always comply with local, state, federal, and international law. ARMSLIST does not become involved in transactions between parties. Review our privacy policy and terms of use for more information. Report Illegal Firearms Activity to 1-800-ATF-GUNS.”

In brief remarks about themselves, they say, “We wanted the site to be simple, easy to use, and non-intrusive, but specifically for buying, selling, and trading guns!” They say, “ARMSLIST was created by a number of gun owning and gun loving Americans after seeing firsthand how the popular marketplace sites on the Internet shun firearms. We appreciate all the help and support that everyone has given us and hope for continued success of the site!”

They are quite successful. They have blood on their hands and they are proud of it.