Tales of a female hitchhiker

I faced danger at times, but when I hopped into strangers' cars, I was surprised by something else completely 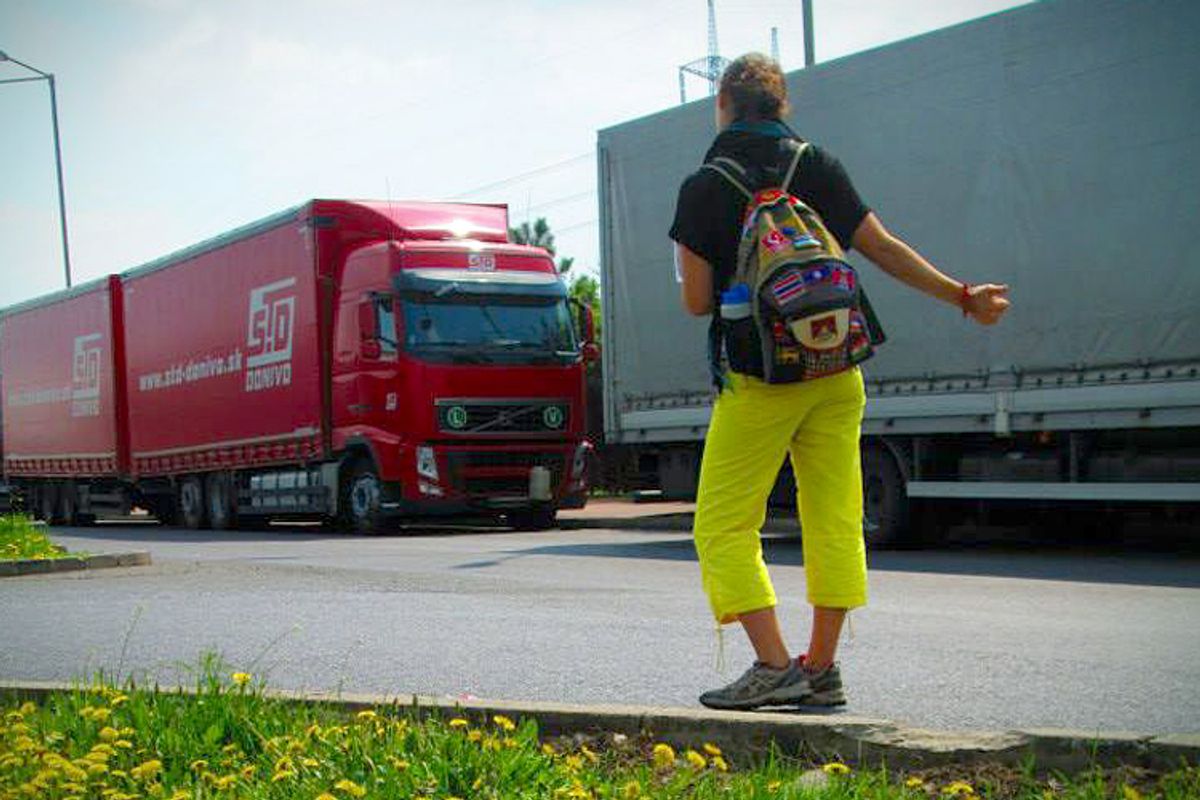 Photo of the author
--

I was sitting in an excessively hip bar in Kreuzberg, Berlin when I turned to my neighbor for conversation. Another American woman. Over our glasses of spritz (white wine and seltzer), we exchanged the usual remarks -- where we were going, where we’d been. I told her I was on a year-long sabbatical from college and spending the final months of my “world tour” in Europe.

“You’re traveling by train?” It was more statement than question.

“Well, since Croatia I’ve been hitchhiking.”

“Yes.” I cringed, accustomed to the response by now, since it was the same one I’d gotten with friends I stayed with across Europe. She shook her head in disbelief, or disapproval, I was never sure which.

“You are either very brave or very stupid,” she said. “Or crazy.”

I love adventures. Over the course of my year-long journey, they became my raison d’être. I had always wanted to be fearless, and now I had begun to actively seek out and defeat the things that scared me. I got in motorcycle accidents in India. I accepted invitations to strangers’ homes in Nepal. I started eating meat again so I could try anything. I hopped buses on an impulse and boats on a whim. I ate street food throughout Asia. I became a “yes woman.” I tried to shake free of the platitude that, as a young woman, I must always travel with fear and caution.

By the time I reached Europe in April of 2013, seven months into my trip, the initial euphoria of my solo journey had begun to fade. I crossed the Balkans by bus and train and realized that the simple act of travel had ceased to be an adventure. Trains, which I had loved with a romantic nostalgia bordering on the irrational, had become banal, and that saddened me. I sought to rekindle my adventure.

That is how, on April 20, 2013, I found myself walking out of Dubrovnik, Croatia, a piece of paper in hand with “SPLIT” (my next destination) written on it. As I walked an hour to my “hitch spot,” a promising stretch of road just before the highway, the late-morning sun scorched my neck and shoulders, beads of sweat formed on my nose, and my overfilled pack chafed my hips. I had 227 kilometers (141 miles) to travel, a map in my head, and a can of bear spray in my pocket.

Ten minutes later I was chatting with Marco and Sascha, two young Macedonian soldiers on leave from their U.S. army service in Afghanistan. Their accounts of drug busts, combat and war put my own stories into perspective. My heart, which had been pounding since I walked past the autobuska stanica (bus station) and out of my comfort zone, returned to a normal rhythm as we sped along the shimmering Dalmatian coast. They left me at the tolls just outside Split, and I quickly found another ride to the old city.

Marco and Sascha had the distinction of being my first lift, but they wouldn’t be the last. Over the next three months, I traveled more than 6,000 kilometers (3,700 miles) in over 50 vehicles through Croatia, Slovenia, Austria, Germany, France and Italy, all by the force of my thumbs.

I had heard many times that I was brave to travel alone, and I had always shrugged my thanks. It had seemed a bit of an exaggeration. It was not until I stuck my thumb out on that open Croatian road that I truly felt I was doing something courageous. That is, I was doing something that, quite reasonably, frightened me. In hitchhiking, I had to fully open myself to the vast and uncertain possibilities of the world. It was equally thrilling and terrifying. The exhilaration of this openness, the surge of adrenaline in my belly, struck me each morning as I carefully spelled out my next destination in bold, black letters. The elation of being on my way after a long wait, totally free and moving, always moving, never faded as I stepped from one car to the next.

As I continued on, my pack became lighter. I gave away clothing to friends, left behind shoes, used up my shampoo and didn’t buy more. I became lighter. I stopped updating my blog. What could I write about that was not this? The physical act of travel, of movement, once more consumed me.

I could, in response to expressions of disbelief and disapproval, argue the statistics: that I was safer on the road in Germany than at a frat party at my college, that my odds of being harmed were so low that I might as well take risks and enjoy them, that I was more likely to get run over by a car, anyways. I could argue that I carried pepper spray, waited at gas stations and took rides selectively, but those are false securities and, regardless, I made my choice on principle. My decision to hitchhike, and then to continue hitchhiking, sprang not from recklessness or a cynical conviction in the futility of caution, but from optimism.

I believe in the goodness of humanity. Not naively — I have encountered too much of the bad to ignore it — but with the same faith that some believe in god. Stubbornly. I chose to act not out of fear of the violent, malicious minority, but out of faith in a good-hearted, decent majority. As the kilometers accumulated, hitchhiking reinvigorated not only my love of travel and my self-assurance as a solo female traveler, but also my love of humanity.

Over the course of those three months and 6,000 kilometers, I came to know the world one car at a time. I shared pretzel sticks with a 3-year-old and Prince cookies with a filmmaker in Germany. I arrived in Monaco in a convertible and crossed the Island of Elba in a mail truck. I upgraded from paper signs to cardboard. I traveled at 250 km/hour (155 mph), and I didn’t take any trains. I discovered hitchwiki.

I even started singing. I was standing  at a gas station that day, on a secondary road heading out of Ljubljana. The police would helpfully transport me to a more opportune location a couple hours later. The overcast sky and light drizzle were slowly sapping my enthusiasm; I felt more lonely than energized. I had never been a singer, but something about the physical and spiritual emptiness of that space invited song. I began with old folk tunes, “Wagon Wheel” and “House of the Rising Sun,” and then moved on to improvisation, writing my own blues songs. My voice, uncharacteristically deep and loud with a newfound audacity, kept me company from then on.

On three separate occasions, female friends joined me for a few days of my journey. I taught them my road songs, and they added to them. I shared with them the best feeling in the world: movement. I flattered myself, briefly dreaming of a revolution of female hitchhikers, but it would be a dangerous and ill-conceived rebellion. My mission is personal, and I might in fact hesitate to encourage other women to follow me.

I shared stories along the way, but mostly I listened. When a Jordanian hotel magnate’s son described his plans for a theatrical suicide, I told him that if no one else did, I would care if he went through with it. When a German grandfather spoke of his family, I asked for details. I became an expert in caring — I cared about their children and businesses, their vacations and troubles, all of it — because once I buckled my seat belt suddenly it all mattered.

When a driver in Croatia asked me if I had ever had sex with two men, I opened the door at the next red light and walked away. The conversation took a very sudden turn from property management to this hugely inappropriate query. Luckily we had not yet reached the highway, so I could easily escape. “Escape” might be too strong a word, however, for he seemed utterly taken aback at my reaction, and possibly even contrite. I’ll never forget the confusion on his face, as if he truly believed he had said or done nothing wrong. Still new to hitchhiking, I had not until that moment grasped the vulnerability inherent in absolute dependence. I considered taking a bus that day. I held on to my convictions, however, and continued on.

That was my only really negative experience. I met with a veritable sea of humanity in those three months, and an inexhaustible wave of kindness and goodwill carried me across Europe.

Ultimately, I found I also had quite a few unique advantages as a woman traveling in this manner, along with the well-known obstacles. “We never pick up hitchhikers,” I heard often, “but we didn’t want someone else to take you!”  People went out of their way to help me. Young and female, I seemed to inspire not the worst, but the best in them — their instinctive drive to protect, to assist, to slow down for a moment and care about the fellow human at the edge of the autogrille (rest stop).

As a young white woman, I found the police friendly, lenient, and eager to help. There are certainly some privileges to being a woman, especially a white one, and I unashamedly mined these.

I knew well the dangers of my chosen mode of transport. You could argue that I courted danger, but I would counter that I refused to be cowed by it. Willful by nature, I had been told my whole life that I couldn’t quite travel, or live, as freely as my older brother, that I must always be burdened by fear and caution. I refused to accept it.

No, I would be free. Tom Robbins writes in “Even Cowgirls Get the Blues,” his novel about an extraordinary female hitchhiker named Sissy Hankshaw, “To live fully, one must be free, but to be free one must give up security.” It might be crazy and stupid, and maybe brave, too, but I found I would take extraordinary risks for the right to adventure.

Ladies, adventuresses, wild women of the twenty-first century: if I see you on the road, I’ll be stopping. I have a lifetime of generosity to pay forward.

Toby Israel is a vagabond by nature, Anthropology student by profession, and has recently returned to Middlebury, Vermont after a year of travel and adventure in Asia and Europe. Her work has been published at elephantjournal.com, yourvox.com, and can be found in excess on her travel blog, Next Stop World.