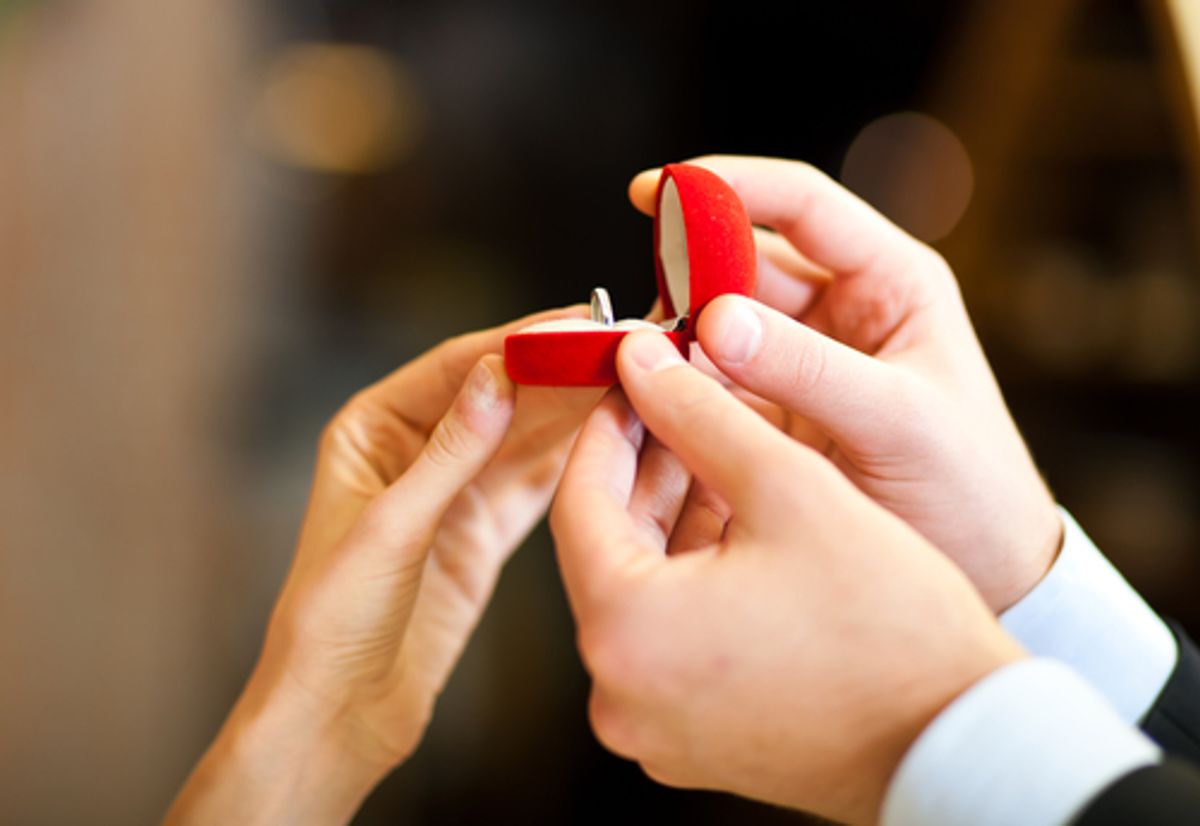 After Vancouver's most famous jilted paramour got his 15 minutes of international attention recently, I was left wondering how we came to be living in a culture manufactured almost entirely by marketers.

Pasquale Angelino ("Charlie") Zampieri hit the headlines when he sued his former fiancée for the return of the $16,500 sapphire and diamond ring he gave her, after three weeks acquaintance, in anticipation of their soon-to-be wedded bliss. They'd met on one of those online dating sites, the news stories recounted with glee, and by his account it was kismet.

Alas, it was not meant to be for reasons not quite clear in the reports, although poor Zampieri says he felt Jessica Bennett, his ex, took advantage of him. Two weeks ago he filed a suit in B.C. Supreme Court to reclaim the ring. Last week, she filed a suit for defamation.

What's left of the once intrepid news reporting staffs of this town sprang into action to get man-on-the-street views. Streeters, once considered the last resort of lazy incompetents, are now the gold standard in journalism and I have to admit they do deliver a kind of insight.

The public view falls into two camps, as summed up by a middle-aged couple: "It's a gift, she's entitled to keep it!" the wife insisted. "She dumped him, she should give it back," countered her husband. (I fear they may suffer marital discord off-camera too.)

But not one person in the parade of sidewalk strollers offered the only sensible response: What the hell did this guy think an engagement ring was for?

The engagement ring is not, as diamond advertisers of the last 80 years or so have insisted, a symbol of love: it's a sort of down payment on a virgin vagina.

I've always thought giving engagement rings was a slightly unsavoury custom, given that it began in an era when women were chattel, more or less. It's hardly romantic. The rings remind me of a time when women couldn't own property because they were property. Well, except for widows. There's a reason that Merry Widow of opera fame was so merry.

As Scott Fitzgerald noticed in the 1920s, the rich are different from you and me, and the custom of laying down an engagement ring was something rich people did in an era when marriage was recognized for what it really is: a business contract. It was done to secure property (and political alliances among royalty and the aristocracy) and to ensure there would be an heir and a spare to inherit it all.

That's why female virginity was such a big deal. It had financial value because it was connected to property. Pre-DNA testing, no one could be sure who the father was unless the bride was irreproachably chaste. And no one wants to see property going to bastards. Post-delivery of the requisite sons, everyone was free to go about discreet amusements, and the country weekend at the manor house came into vogue.

And by society they didn't mean hoi polloi like thee and me, either. They meant what the insightful 19th century novelist Edith Wharton called New York's 400 families.

Then, engagement rings functioned as a sort of retainer -- a lease-a-womb scheme, if you will. The unspoken part of the deal was that an engagement often allowed for a sampling of the goods.

A broken engagement was like a business deal gone bad: there were economic consequences and the injured party (the woman, who was acknowledged to be more vulnerable) was entitled to compensation.

In the event of the man breaking it off, she had what journalists call "a kill fee." Because the reluctant groom wasn't just changing his mind: he was telling the world that she was inadequate in some way. He had tried her, and found her wanting. And since she had been, um... tried... she was off the marriage market for at least nine months.

That was an eternity in a time when 50 was a ripe old age. Spinsterhood loomed by 25. So women didn't want to be seen lollygagging about getting stale-dated or shop-worn.

As the middle class evolved and began owning property, they started imitating their betters, and breach of promise laws sprang up to protect women. Engagement rings weren't common among my people (the working class) until after the wedding industry invented itself in the 1920s. What we now call a "traditional" wedding is actually just a cheap pantomime of a society wedding that has been marketed to the masses.

The elite gave engagement rings with stones of lasting value like sapphires and rubies (as royalty still does), but a wealth of diamond mines discovered in the late 19th century made the white rocks cheap and plentiful. They needed to create a market for this stone, so they began promoting diamonds as the ideal engagement ring to get in on this newfangled wedding industry.

The real marketing genius behind the engagement ring was a copywriter whom every advertising student learns wrote the single most effective slogan of all time, in 1947: "A Diamond is Forever."

Frances Gerety (who incidentally was a spinster) cleverly connected romantic love to diamond engagement rings, forever. She obscured their creepy origins as down payments on chattel, and diamond purveyors are still profiting from her sharp thinking.

The real reason for engagement rings wasn't lost on people of that era, however, as legal scholar Margaret Brinig noted when she researched the history of breach of promise laws. With the abolition of those laws in the 1930s came an increase in the sales of engagement rings to the masses.

That's not a coincidence, and it's not just the wedding industry ramping up. Apparently about half of couples were having premarital sex in the 1940s, and researchers believe that women were looking for some sign of commitment from a man before doing the wild thing. In an era of unreliable birth control, a ring was still seen as a down payment and a sort of insurance policy in the event the man bolted and left her holding the baby.

The pragmatic views of the day are perhaps best summed up in the 1949 song "Diamonds Are a Girl's Best Friend": "Get that ice, or else no dice."

If this all sounds terribly mercenary on both sides, please remember that marriage is a contract: the parties are swapping goods and/or services in exchange for benefits. Although, I think the woman warbling that song may have had a contract other than marriage in mind.

Which brings us back to Charlie Zampieri and his ex-betrothed, and what sort of a business arrangement they had that required a retainer. Did Charlie think he was loaning his fiancée a ring as a glimpse of future shared property?

In short: given equality laws and effective birth control, what in the world is going through people's minds when a man decides to give a woman an engagement ring?

That is what the court will have to sort out, and I'm looking forward to the trial. (Please, please let there be a trial. Also, please let Mr. Justice Paul Williamson preside -- he writes the wittiest decisions.)

With any luck, someone will weigh in and explain how we've all become such victims of marketing that we have no idea what we're really doing when we enter a marriage contract and start passing jewelry around.