Had Boehner been sharper, he might have exploited differences between Reid and Obama. Here's what happened instead 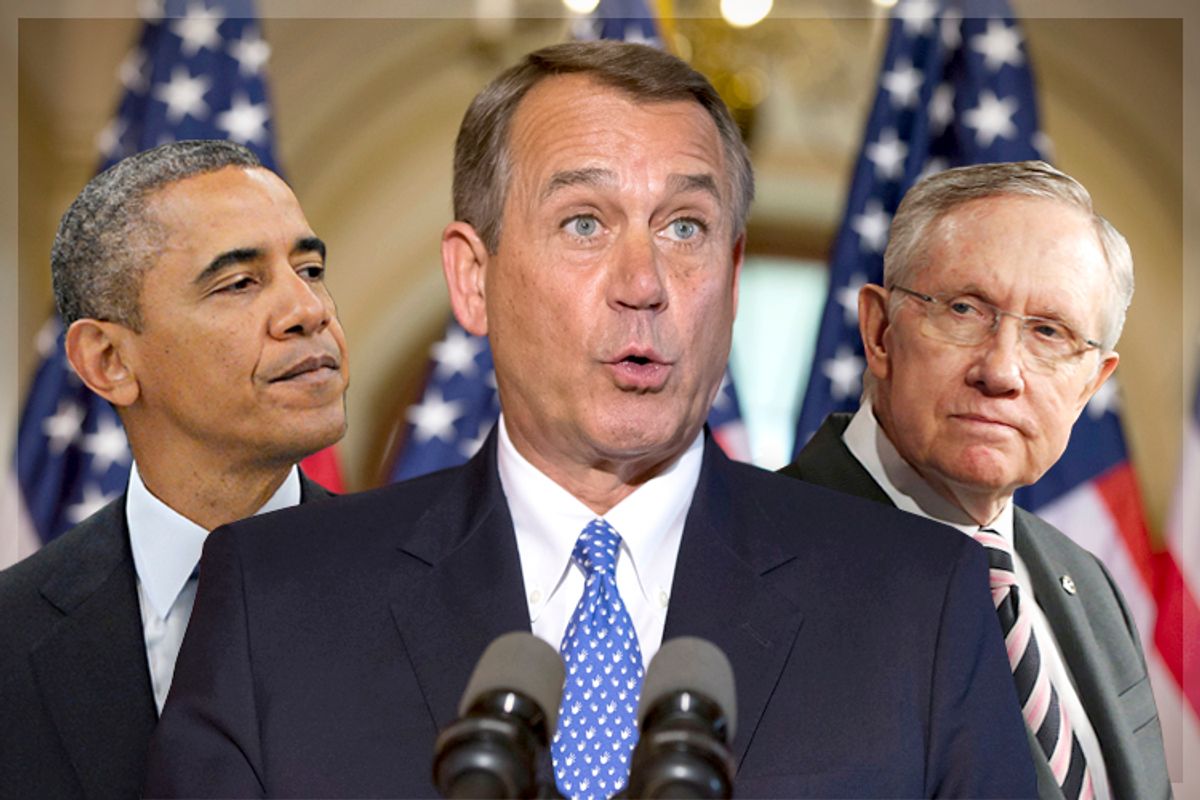 The largest and most important divisions in the shutdown and debt limit fight are within the Republican Party. Bipartisan majorities exist in both the House and Senate to fund the government and probably to increase the debt limit, and the only reason they're not advancing is that House Speaker John Boehner doesn't think he can manage the consequences of siding with the reasonable caucus over the crazy caucus.

But just below the surface, there are tensions among Democrats as well. And they'd be pretty easy for Boehner to exploit if he weren't so paralyzed by his own problems, and unable to read the situation clearly.

Politico touched on this the other day, but I think they mischaracterized the source of the tension.

"Just as top Senate Democrats began to lay the groundwork to raise the U.S. government’s borrowing limit through 2014, senior White House officials refused to rule out a short-term increase. The divergent messages caused major heartburn for top Senate Democrats and gave Republicans fresh hope that they could defeat a yearlong debt ceiling hike and win concessions from President Barack Obama in this fall’s fiscal battles."

There's nothing divergent about the White House's messages. But if you look past the fact that Democrats have stuck together with the glue of the GOP's impossible demands, it's pretty clear the White House's incentives don't align perfectly with the Senate's.

The White House's bottom line is simple, and has been remarkably consistent: no substantive concessions to Republicans in exchange for completing basic, non-optional requirements of the legislature -- funding the government, authorizing the borrowing required to finance the deficits they've created. It's crucial to Obama that he establish the precedent that Congress can't extort from him and future presidents on the threat of default policy changes that they're unable to achieve through normal electoral and legislative channels. Everything else -- including the size of the debt limit increase -- is up for discussion.

I don't know if anyone in Senate Democratic leadership would agree with this, or admit to it, but I suspect their real concern isn't that Obama's portending a cave, but that his position will leave them on the hook if Boehner ever gets his act together.

Obama enjoys the luxury of never having to face the voters again. Congressional Democrats -- including a handful of very vulnerable senators -- will face them just over a year from now. And so when Obama signals, as he did on Tuesday, that he'd be OK with a short-term debt limit increase, what they hear is: "My imperatives are more important than yours."

They have a point, too. If you take Obama's (I think important) principle to its logical conclusion, it leads congressional Democrats to unpleasant places.

According to what I'd call the "Obama rule," a one-month debt limit increase with no concessions would be an acceptable outcome, but a year-long debt limit increase in exchange for a modest policy concession, like a repeal of the medical device tax, would be a non-starter. There are good reasons for him to uphold that principle, but if you're a House or Senate Democrat running for reelection next year, this is extraordinarily inconvenient. It's not that these Democrats want to enshrine this kind of hostage taking. But a year-long reprieve from budget brinkmanship would be pretty nice right about now. Nicer, certainly, than serial wrangling over clean debt limit bills, and all the messaging votes that come along with that. For a low price, they might be willing to pay for a deferment.

Perhaps to avoid a situation in which Congress tests his bright line, Obama made the following suggestion on Tuesday: "So if they want to [negotiate], reopen the government, extend the debt ceiling. If they can't do it for a long time, do it for the period of time in which these negotiations are taking place."

Obama would obviously be hard-pressed to veto a clean debt limit increase just because it wasn't large enough. But by making the suggestion himself, he undermined Harry Reid, who later the same day introduced a year-long extension.

Until recently, Boehner had given every indication that he'd make laughably extreme substantive demands to avoid default. That helped disguise, or override, the essential difference between Obama's incentives and those congressional Democrats'. If Boehner's conservative members had given him the latitude to operate, and if Republicans in general hadn't so badly misread Obama, they could have exploited this difference, sought concessions Senate Democrats might have been willing to part with. Found the sweet spot. Tested the Obama principle.

Instead, they've been unable to settle on any demands whatsoever. Absent Obama's intervention, Reid's year-long plan might've been the only ship sailing. Instead, it looks like they'll be able to hop on to Obama's life raft -- settle for no immediate concessions, and attempt a damaging redux later this fall.