How hard can it be to do laundry the (sort of) old-fashioned way? 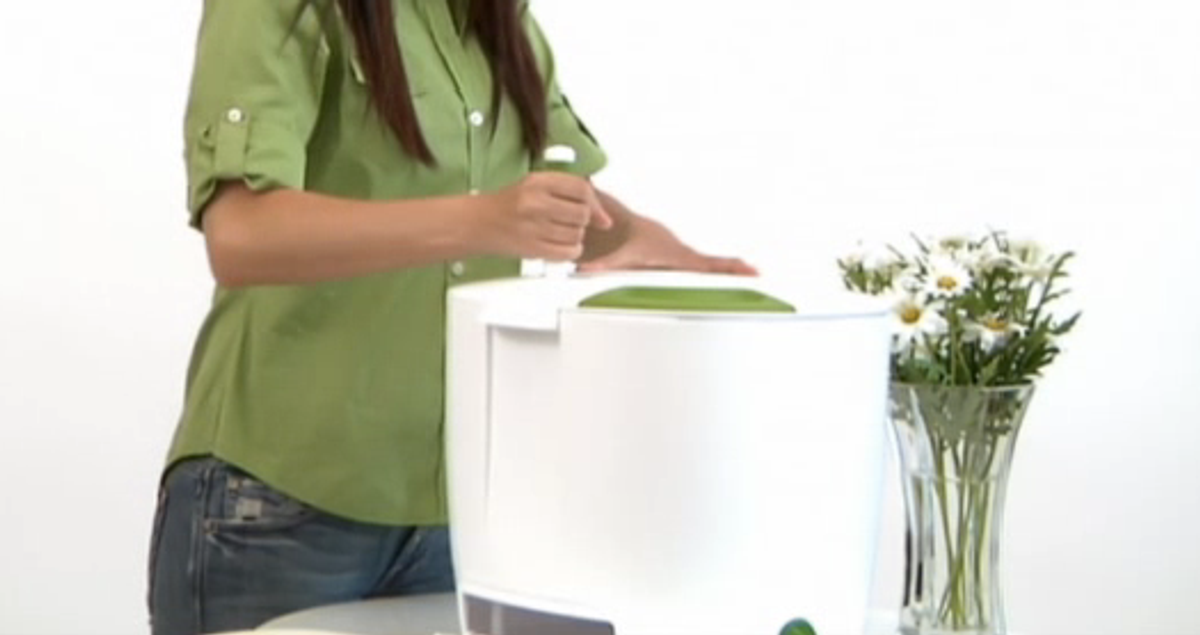 On a lazy Sunday morning, I threw a load of tank tops and workout clothes into my washing machine. I then hauled out my new Laundry Pod, set it up next to my sink, and prepared to wash a separate, smaller set of delicates the ultra-modern way: by hand.

The Laundry Pod, a futurist hunk of plastic that resembling an oversized salad spinner, promises to take the user “Where laundry has never gone before.” Sure enough, I have never done laundry in my kitchen before.

As water poured into my conventional washer, I aimed my kitchen sink nozzle at the Pod. After about five minutes, my small load of clothing -- sports bras and a couple of white t-shirts -- is floating in warm water and “about a fifth” of the detergent I’d have used were I doing this the standard way. I replace the Pod’s lid and snap it into place, and then wait a few minutes to let the clothes soak.

Then I began to crank.

This is how you create a spin cycle, the “green” way: I grabbed the easy-grip handle on the Laundry Pod’s lid and used my full arm strength to spin it in large circles. I cranked counter-clockwise, to begin with, then changed directions to keep things interesting. The handle revolved, and the Pod’s inner basket rattled about. While I couldn’t see inside, I imagined my clothes tumbling in a sudsy blur.

“Agitation,” according to my instruction booklet, should last for 1 to 2 minutes. But I gave it a little something extra, because it was fun, in a “Little House on the Prairie” way. I churned butter, once, on a school trip to an old-timey village; from what I can remember, it was pretty much like this.

I called my mom and younger brother over to watch me go. Generous laundress that I am, I even let them each take a turn.

Once I was convinced that my clothes were good and agitated, I drained the Pod into the sink through a hose snaking out its side. The water poured out at first, then slowed to a drizzle. I churned for a few more minutes, shaking out as much excess water as possible, then added fresh water to rinse.

I pride myself on my upper-arm strength, but the second time around, it was a bit less fun. I asked my brother if he’d like to try again, but he had lost interest. Ditto my mom. For me, there could be no quitting halfway through. The laundry has to be rinsed, then drained again, and then -- though this isn’t explicitly in the instructions -- rinsed and drained once more. (I may have used too much detergent.)

By this point, my enthusiasm for laundry was entirely depleted. I wasn’t sure if the soap was entirely gone, but my clothes smelled good, so I was willing to round them up to “clean.” Around the same time, my conventional washer showed signs of slowing. One of that machine’s major selling points, according to its manual, is its 1200 RPM, which means my clothes are always wrung out before I moved on to drying them. I’m not sure how fast the Laundry Pod can spin, but its power source (me) was exhausted.

Sure enough, my clothes were dripping wet when I took them out of the Pod to hang-dry. I got wet, as did the kitchen floor. But while it would be the next day before they were dry enough to wear, I resisted the urge to just throw everything in the dryer. It was only fair, I felt, to see my all-green laundry cycle to the end.

The whole process took about a half hour, roughly the same amount of time the rest of my clothes spent in the washing machine. But according to the Laundry Pod’s specs, a full cycle uses only 6 liters or water. Conventional washers, its promotional materials say, can use up to 50. My, apartment-size, Energy Star-rated machine uses 9.3 in a normal cycle. Since it can fit a lot more laundry, the Laundry Pod wouldn’t necessarily be saving me water unless I was only planning on washing a couple of items.

Electricity-wise, of course, the Pod is clearly the greener choice. The annual energy usage of my small washer is 146 kWh -- and Energy Star washers typically use 37 percent less energy than normal machines. Dryers tend to use even more. The energy that went into cleaning my clothes the Laundry Pod way, on the other hand, was 100 percent my own.

It made me feel green, but also kind of kooky. And a bit sore. It took me to that weird place where “green” doesn’t line up with “convenient.” And in this case, hand-churning my laundry is less convenient than, say, taking the time to sort my recyclables. At a certain point, the premise that this is better than just letting things soak in the sink falls apart. Those with higher cleanliness standards might feel differently.

My ever-resourceful coworker, Katie McDonough, washes her delicates in her actual salad spinner. “I just rinse it out really well in-between laundry and meals,” she says. If you were to use a laundry pod as a salad spinner, you could feed a sizeable dinner party.

Most people probably won’t know what I mean when I refer to my bulging “laundry biceps,” but I’m thinking about calling them that anyway.

Catherine-Gail Reinhard, the vice president of content marketing for StoreBound, the company that sent me the Laundry Pod, says they’re developing an electric version for people who aren’t as keen as I am on building up muscle mass. She said it will still be portable and save on water and power for small loads of wash.

The Laundry Pod is heavily marketing toward people who don’t have easy access to a washing machine. I can certainly imagine situations when it would be useful, such as if you live far away from the nearest laundromat, and you’re out of quarters, and it’s raining outside and you need clean underwear for work tomorrow. Plus, you were planning on using your salad spinner for dinner.

The Pod’s promotional materials also suggest that the it’s great for camping trips, members of the military, those on “explorative missions in the jungle” or people displaced by natural disasters. They boast that it works in “almost any climate” -- and if you’re in the kind of climate that threatens your Laundry Pod, which seems very durable, you probably should have other priorities aside from doing the laundry, anyway.

Just when I was about to write the Laundry Pod off as a cool idea that ended up being more trouble than it was worth, a co-worker started peppering me with oddly specific questions about my experience. Turns out, there’s one other category of people that portable laundry is ideal for: expectant parents. And now I have the perfect baby gift.

The Laundry Pod sells for $99.95, but using it saves on water and electricity costs, or, if you don’t have a washer, trips to the laundromat. Since it’s not going to be able to replace all of your laundry needs, however, it might take you a while to break even.

Katie’s salad spinner, it’s worth noting, retails for $29.99. It lacks the nifty drainage hose, but can fit between two to three t-shirts or one sweater, she says. It can also hold enough salad to feed eight people (as an appetizer).

You should to take the time to fully evaluate your laundry needs -- and the amount of physical effort you’re willing to put into your spin cycle -- before investing in the Laundry Pod. But my clothes did end up clean.