I let my daughter get a tattoo

Yes, she's only 17. But after battling Crohn's disease, she's earned the right to reclaim control of her body 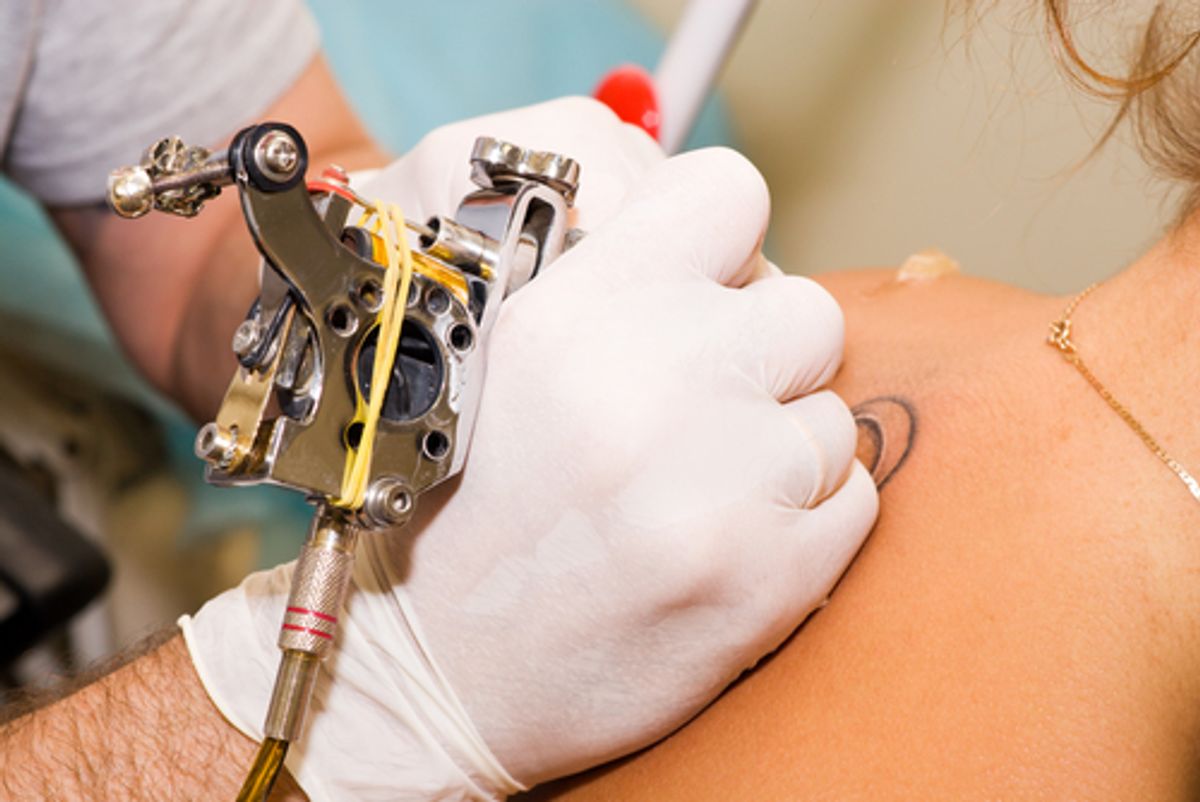 This piece originally appeared on The Broad Side.

She’d been asking for years.  My firstborn, with the red hair and creamy skin, wanted a tattoo.  For years she’s been asking.

A tattoo.  The most permanent of permanent body alterations.

When she was 14 and 15, it was easy to laugh – “Pffffft!  Over my dead body!”  ”You?  The girl who gets tired of a haircut after three hours?”  And my go-to favorite, “If you still want one when you’re older, we’ll talk.”  Well, she was coming up on seventeen, and wanted to talk.

I knew better than to offer a henna tattoo – you know – the kind that isn’t permanent and the design can be different every time!  No, I knew better.  And each time she brought it up, tentatively and unusually respectfully, I pushed her off.  I couldn’t help but admire her persistence, though, with this request.  Normally that sort of thing annoys me – you know, the kid asking over and over for something I’d already said “no” to.

This topic, however?  There was something in the way she asked that told us this was different.

To be clear, she knew Dave (hubs to me/dad to her) and I had no moral objections to tattoos.  I think they can be beautiful if done skillfully and with meaning.  We just had the usual parental anxiety regarding: (1) the permanence,  and (2) the pain involved.  Especially the pain involved in the tattoo she wanted to get.  Birds.  Not a tiny little hummingbird.   She wanted the Paul Reed Smith birds.  Not one or two of the PRS birds.  All nine.  All nine of the birds depicted on her precious PRS guitar - the guitar she saved her money for nearly a year to buy when she was fourteen.

Well, now she was almost seventeen and she really wanted to get this tattoo.  She’d been lobbying hard, though carefully.  She enlisted her friends to convince us.  Friends with tattoos, friends without tattoos, friends whose parents would throw them out of the house if they got a tattoo. She even tried to appeal to my innate desire to score cool mom points by suggesting we get (are you ready for this?) MATCHING tattoos. Fighting the sudden wave of nausea, I weakly suggested we get matching bracelets, instead – I mean, wouldn’t that be nice?  No go.

So, while Dave and I had pretty much accepted the notion that she was going to get a tattoo at some point, I was still hesitant. “I’m not even asking for you to PAY for it for my birthday, I’m just asking for your PERMISSION for my birthday.”  She had been once again, saving her money for something she desperately wanted.  This was not a passing phase, and it’s not like she was getting an Angry Birds tattoo or the latest trendy tribal.  This was special to her, and really represented who she’s been since almost as long as she could remember.

Despite my qualms, however, there was one moment when any and all shreds of resistance disappeared. Interestingly, the moment had absolutely nothing whatsoever to do with music.  It had to do with giving her back control of her body.

She’s had thyroid disease since elementary school, and has become a veteran of both regular blood tests and daily medicine-taking.  On top of it, in the last year, she has undergone myriad tests for some weird GI distress and alarming weight loss.  Some were, shall we say, more invasive than others.  But many, many, involved needles, and ultimately she ended up with a diagnosis of Crohn’s disease, requiring only medicine and management at this time, thank God.  But more medicine.  And blood tests – more blood tests.  Throughout all of it, ALL of it, she was the most unbelievable trooper.  Taking her medicine, presenting her veins for pinpricks, failed, then repeated blood tests, tests requiring anesthesia, specialized MRIs, ALL of it she handled like an absolute champ.

So, after yet another doctor visit over the summer, we were having breakfast at Jimmy’s.   She was eating her pancakes and looking at me, when she tentatively asked, “Mom?  Have you thought any more about the tattoo?”

I was about to answer with, “WHY, Emma?  WHY?  After all the needles you have stuck in you every couple of months, after the dozens and dozens of tests over the past year, you WANT to have more needles???”

Something suddenly stopped me, and all my tension went away as I came to the following conclusion: after all the poking and prodding she’s uncomplainingly endured in the last year, if she was willing to be stuck with a needle so she could come away with something she actually wanted from the experience, I was not going to stop her.  This girl deserved the tattoo she wanted.  On the Wednesday after her seventeenth birthday, she got it.

I knew I wouldn’t mind the way it looked, but I was surprised at how absolutely beautiful I thought it looked.  It is so her.  I’m so glad we let her do it.  A week or so later, another thought occurred to me.  Had I made her wait until she was eighteen and did not legally need my consent (something we considered,) she would not have needed me to go with her.  She could go without me.  But since she was seventeen, she had no choice.  I had to come along.  Because of that, I was there for something that made her so happy.  Also, because I was there, I was able to slip my hand into hers for her to squeeze when she needed to.

She’s seventeen.  How many more times in her life will she need my hand to squeeze?  Those moments grow fewer and far between as she grows up, and I’m grateful for every single one of them I get.