How Alice Munro won me over

Once I assumed I had no interest in the Nobelist's brand of fiction. I was wrong and you probably are, too 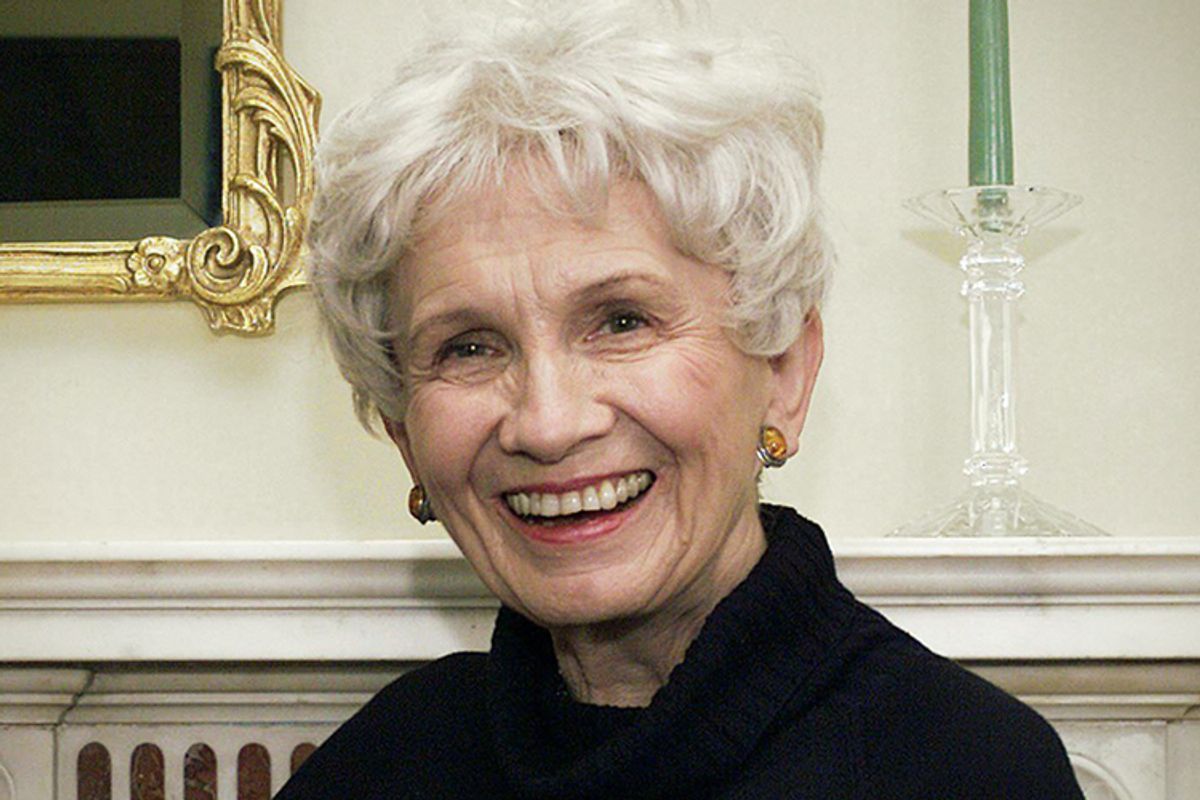 FILE - In this Oct. 28, 2002 file photo, Canadian author Alice Munro poses for a photograph at the Canadian Consulate's residence in New York. Munro has won this year's Nobel Prize in literature it was announced Thursday Oct. 10, 2013. The Swedish Academy, which selects Nobel literature winners, called her a "master of the contemporary short story". (AP Photo/Paul Hawthorne, File) (Paul Hawthorne)
--

Hardcore Alice Munro fans have been lobbying so long for the Canadian short-story master to win the Nobel Prize in Literature that the fact she's actually won it seems a bit unreal. The Swedish Academy is, after all, famously resistant to such campaigns. Given that the academy also seems to prefer writers of a political -- if not outright dissident -- bent, Munro's nabbing of the honor has become another link in the long chain of improbabilities that has been her brilliant career. To write at all, she once explained to the Paris Review, was difficult for a woman who married young, promptly became a mother and also worked shifts in the bookstore she owned with her husband. Then there's the fact that Munro is a Canadian woman who writes short stories, three traits that virtually repel public interest, and certainly appeared unlikely to win her international fame and reverence.

You can find any number of devotees to rhapsodize about Munro's work, and chances are that if you are the sort of reader to heed their arguments, you have already read it and don't need me to explain it to you. But if instead you are, like me, a reader resistant to the type of fiction Munro writes, then the praise of Jonathan Franzen or James Wood or Francine Prose is probably not going to change your mind. On the other hand, you might just listen to me, someone who once shared your resistance, when I tell you that, this time around, the Swedish Academy has gotten it right.

Munro writes what many people refer to (scornfully) as classic New-Yorker-style short stories. They're naturalistic fiction about the domestic and personal relationships of very ordinary people, usually women, most of them born and raised in provincial Canadian towns. I freely admit that this sounds fantastically boring, and even when a writer friend I respected deeply gave me a copy of "Friend of My Youth" many years ago, I neglected to give Munro a try. The short story form (in prospect, at least) has never appealed to me, and after a dire childhood encounter with "Little Women" -- foisted on me by female relatives -- I developed a lifelong resistance to fiction in which, as my teenage self once put it, "people just sit around thinking about how they feel about their relatives."

But, if we're lucky, we grow up and learn to reconsider our prejudices. One day, a little over a decade ago, I picked up a copy of "Hateship, Friendship, Courtship, Loveship, Marriage," figuring I ought to at least try to expand my readerly horizons. I read it. I got it. And here is the review if you'd like a deeper explanation of what I had to say about it back then.

While I might still prefer fat novels set on a broader stage and teeming with ideas and adventures, in Munro's stories I found the breath of life, but more than that: the feeling of having lived through her characters rather than just being entertained or enlightened by them. Her work transmitted to me the resonance of age -- what's commonly referred to as its wisdom -- without requiring that I actually be old to apprehend it. The writers capable of doing this are vanishingly rare; one of them is Chekhov, and the rest you can probably count on one hand.

One reason why Munro's advocates feel obliged to sell her so hard is that this quality is nearly impossible to convey in a review. Instead, the critic finds himself offering up those drab little scenarios that serve as the springboard for Munro's wizardry and then, feeling the shortcomings of this, uneasily moved to heap on the superlatives and the hosannas. It all sounds suspiciously excessive and indiscriminate, as does most frothing praise.

But I will tell you this, as a fellow skeptic: If, when you read about Munro, your first thought is "Yeah, right: That's definitely not for me," please do think again. If you are only ever going to give this genre of fiction one try, she's the author to pick: I recommend both "Hateship, Friendship, Courtship, Loveship, Marriage" and "Friend of My Youth" (which I have since read -- Thanks, Mary, and sorry I was such an ass about it). If those books do not move you, then you can return to your well-worn readerly groove in perfect confidence that your tastes are really as limited as you assumed. And the loss will be nobody's but your own.