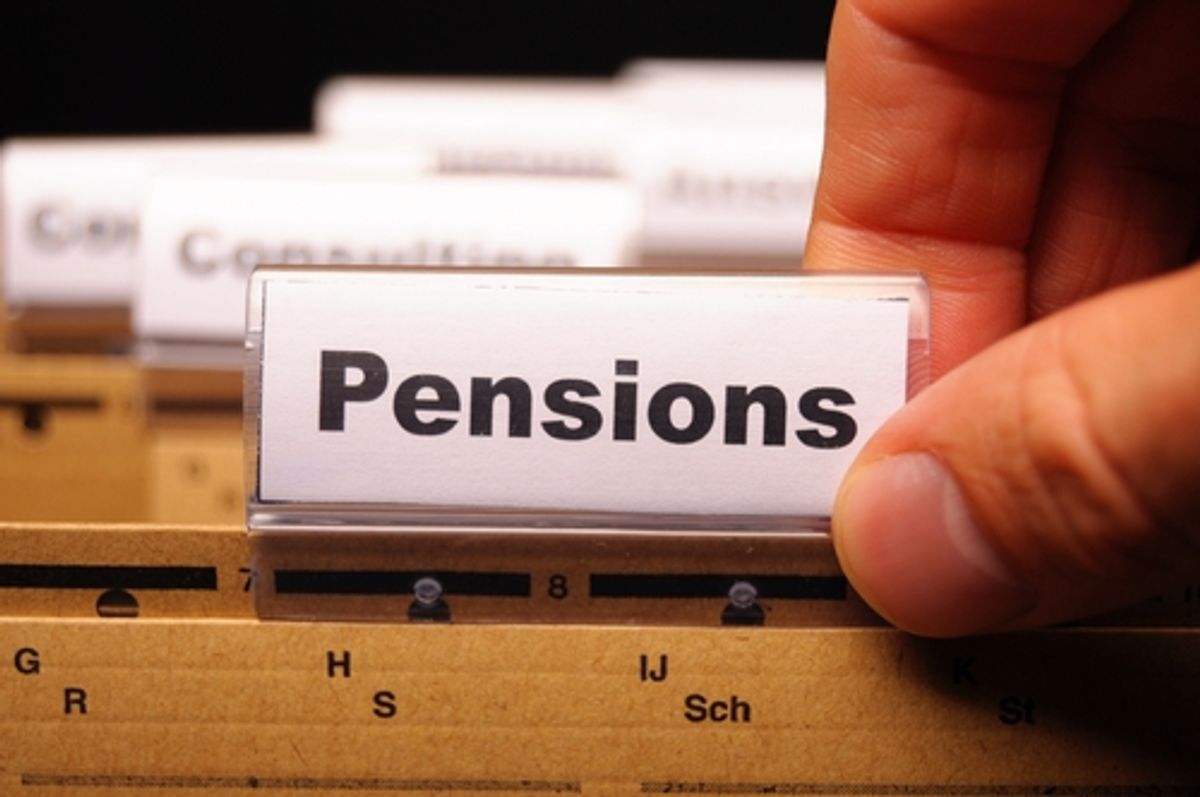 As state legislatures prepare for their upcoming sessions, you will no doubt hear a lot about public pensions. More specifically, you will hear allegations that states are going bankrupt because of their pension obligations to public employees. These claims will inevitably be used to argue that states must renege on their pension promises to retirees.

This is what I've called the Plot Against Pensions in a report I recently completed for the Institute for America's Future. Engineered by billionaire former Enron trader John Arnold, championed by seemingly nonpartisan groups like the Pew Charitable Trusts and operating in states throughout America, this plot is not designed to strengthen pensions or to save taxpayer money, as its proponents claim. It is designed to slash public employees' guaranteed retirement income in order to both protect states' corporate welfare and, in some cases, enrich Wall Street.

Consider the math of state budgets. According to Pew's estimates, "The gap between states' assets and their obligations for public sector retirement benefits (is) $1.38 trillion" over 30 years. As the Center for Economic and Policy Research notes, this gap was not caused by benefit increases, as conservatives suggest. Data prove that most of it was caused by the stock market decline that accompanied the 2008 financial collapse.

Of course, regardless of cause, a $1.38 trillion shortfall sounds like an emergency. But it is a relatively tiny problem -- one that may require small changes, but does not require radical schemes to entirely eviscerate retirement benefits. That's because, as CEPR points out, in most states the shortfall "is less than 0.2 percent of projected gross state product over the next 30 years."

To put those numbers in perspective, remember that the 30-year $1.38 trillion pension shortfall is just $46 billion a year -- and "just" is the operative word in comparison to the amount states give away in the form of corporate subsidies.

According to a 2013 study by the U.S. Public Interest Research Group, states lose roughly $40 billion a year thanks to loopholes that let corporations engage in offshore tax avoidance. Additionally, a New York Times analysis recently found that "states, counties and cities are giving up more than $80 billion each year to companies" in the form of subsidies -- many of which create no jobs.

State and local governments, then, aren't bankrupt. Indeed, contrary to pension-cutters' assertions, they are so flush with cash that they spend a combined $120 billion a year on corporate handouts -- almost three times the total pension gap.

That's why, as the National Association of State Retirement Administrators says: "The idea of imminent (public pension) insolvency is a gross distortion." It is also why McClatchy Newspapers declared that "there's simply no evidence that state pensions are the current burden to public finances that their critics claim."

Why, then, are public pensions being targeted by an Enron billionaire, the Pew Charitable Trusts, corporate front groups and right-wing activists? Because pretending public pensions are the primary cause of state budget problems allows greedheads and ideologues to distract attention from -- and therefore prevent cuts to -- their beloved corporate welfare. In some cases, it also allows them to embed language in pension "reform" proposals that transfers worker retirement money into alternative investments -- the kinds that incur expensive hedge fund fees and enrich Wall Street.

Lost in the debate, of course, is the simple fact that promises to workers are sacred -- workers base career decisions on them. In the public sector sphere in particular, many workers traded the possibility of higher private sector wages for the promise of stable retirement benefits in the future.

For this reason, a plot that uses pension money to enrich the already rich should be called what it is: not just tragic or unacceptable, but downright immoral and inhumane.