10 amazing acts of kindness during the government shutdown

United in their distaste for Congress, Americans are putting politics aside to do what's right -- Colbert included! 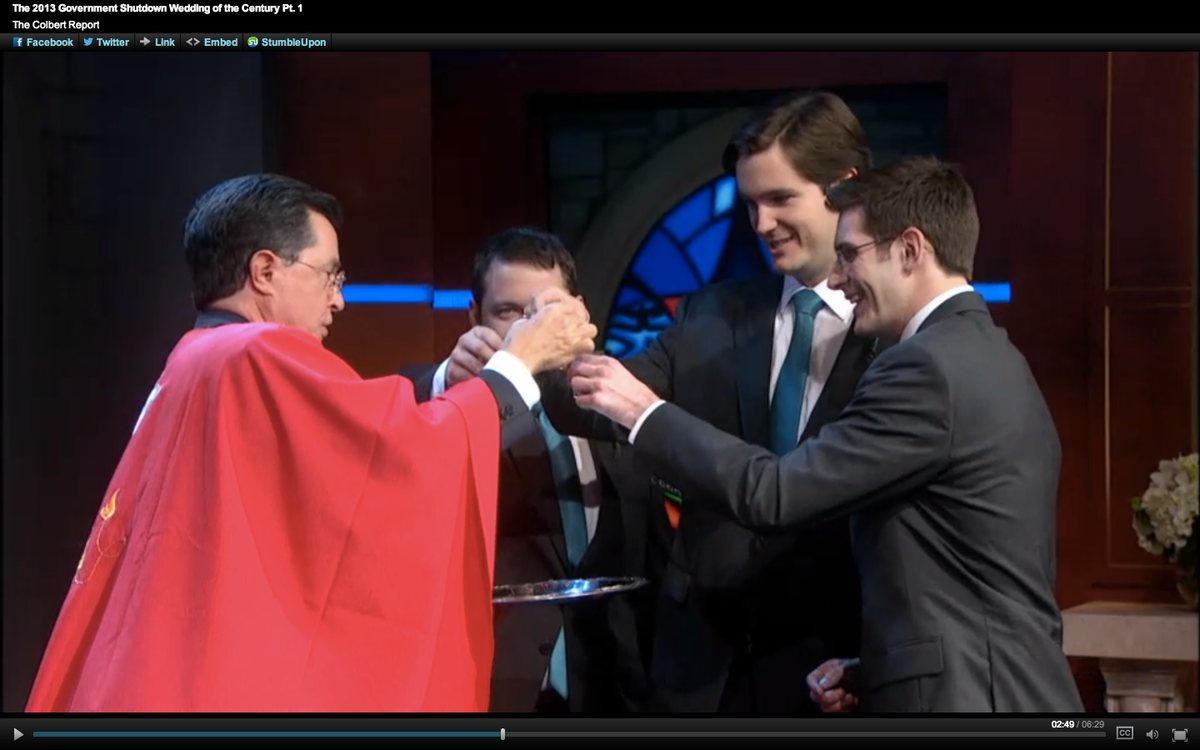 “These are our memorials,” said the 45-year-old chainsaw sculptor lugging around lawn equipment in Washington, D.C. “Do they think that we’re just going to let them go to hell? No.”

Chris Cox, from South Carolina, was telling Washington’s All-News 99.1 why he put his life on hold to mow the lawns and tend the grounds of the Lincoln and World War II memorials in the midst of the government shutdown, now nearing its third week.

“The building behind me serves as a moral compass, not only for our country but for the world,” Cox told the Washington Post. “And over my dead body are we going to find trash pouring out of these trash cans. At the end of the day, we are the stewards of these buildings that are memorials.”

America has never been more frustrated with its politicians. The GOP’s approval rating sits at an all-time low of 28 percent. But Cox’s act of kindness, which seemed to transcend political leanings, struck a chord with a cynical population.

“It’s about service for the sake of what he believes to be right no matter the circumstance,” a user wrote on Reddit, where the image of Cox first went viral. Another composed a song about Cox.

There’s a silver lining in this shutdown: United in their distaste for Congress (and kids getting locked out of zoos), Americans are putting politics aside to do what’s right.

When Cristen Smith of Utah heard that her local Women, Infants and Children nutrition and health program (WIC) was struggling under the government shut down, she wanted to give back anyway she could. So she started on Facebook.

“Courtesy of the government shutdown, I'm aware women can't fill their WIC,” the 21-year-old wrote, according to the Standard-Examiner. “Though I can't help much, I do have a pear tree with plenty of fresh pears for anyone in need. I'm donating them to anyone who needs them. If you need baby food (pears, bananas, peas, etc.), I know how to make that too...”

To help expedite the donation process, Smith took her pears down to a Walmart and gave them out in exchange for food and baby supplies.

2) A couple got married on Colbert

On Oct. 1, two dozen sets of wedding bells were silenced after ceremonies scheduled at national monuments were canceled. To help prevent a stampeded of bridezillas, Stephen Colbert married one of the unfortunate couples.

For the thousands of federal workers out of a job, the stress can be unbearable. As a way to cope, a handful of  furloughed Environment Protection Agency (EPA) employees workers have put their nerves at ease by cleaning up Herndon Park in Durham, North Carolina.

"It's kind of in the blood of everyone you see out here—it's in my blood—community service, public service. It's kind of what we do," Scott Mathias told WRAL. "It's what you do every day in the office, and when you're not in the office, it's kind of hard to imagine what you should do other than help your community."

Each year, Washington, D.C.’s Martha’s Table gives out more than 20,000 meals and groceries to people in need. The organization survives thanks to to the 10,000 volunteers from schools, businesses, and religious-based groups around the community. But because of the shutdown, that number is likely to increase this year.

"We're lucky to have 10,000 volunteers, but what we've seen in the last few days is an enormous surge in federal employees," Martha's Table CEO Patty Stonesifer told myFOXDC.

Starbucks is offering a free cup of coffee to any patron willing to buy another person a drink at the cafe. The promotion is running through Friday.

Starbucks CEO Howard Schultz hopes the gesture will encourage people to “support and connect with one another, even as we wait for our elected officials to do the same for our country."

Ravioli, coffee, and macaroni and cheese are just some of the goods Reddit’s r/food_pantry purchased through Amazon. It’s all going to a family in a tight spot.

“We've gotten so, so much help, and I am so grateful I can hardly even type right now,” redditor toxicpancakes wrote. “Reddit has proven to be an amazing community time and time again, and I can't wait for the minute I can give back. My husband and I thank each and everyone of you so much. I don't even know what to say beyond that, you are all amazing people.

When 63-year-old Jo Elliott-Blakeslee went missing two weeks ago the Craters of the Moon National Monument in Arco, Idaho, 19 employees were working to find her. By the time the shutdown kicked in, that number fell to zero.

But thanks to community support, the park “has received permission to keep 10 workers under the ‘excepted’ status during the search,” KBOI2 reported.

If you’re a furloughed employee living in St. Louis and in need of some grub, Sugarfire Smoke House is offering up a free meal.

The Head Start program was started in 1965 as a way to provide education, nutrition, and health services to poor children in the community. When the government shut down Oct. 1, that included Head Start. So far, more than 7,000 children have been affected. Laura and John Arnold were tired of it.

Three days ago, the couple decided to donate $10 million to “reopen the seven Head Start programs in six states that were expecting to receive their federally allotted grants,” NBC News reported.

“We believe that it is especially unfair that young children from underprivileged communities and working families pay the price for the legislature's collective failures,” the Arnolds said in a statement.

TD Bank is offering disenfranchised government employees a $1,000 overdraft on their accounts without a penalty. The offer is through a new program called TD Cares, which runs through Nov. 2.

“If you've got a TD Bank credit card and have to miss a payment, you'll be forgiven any late fees,” Daily Finance added. “And federal workers who have mortgages with the bank will be eligible for mortgage assistance, though it's not clear what form that assistance will take.”