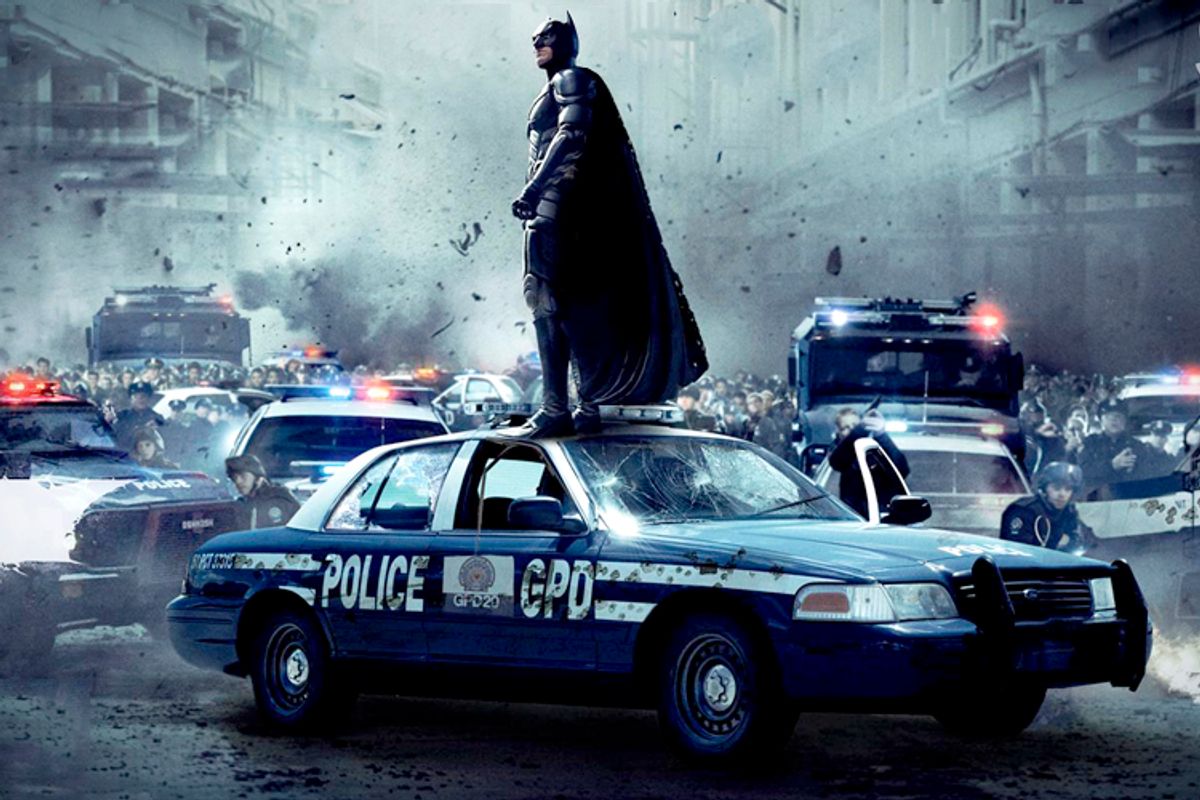 Paul Liu, a resident of Oakland, Calif., was frustrated at the city government's inability to tackle rising crime in his neighborhood. An economist who works for Google, Liu proceeded to do what must come naturally to an employee of one of the world's most forward-looking corporations. He went online and crowd-funded an answer. Using the San Francisco start-up Crowdtilt, Liu created a campaign to pay for a private security firm to patrol his local streets.

Within 48 hours, his campaign hit its $8,200 goal. Residents of adjoining neighborhoods took immediate notice, like meerkats perking up at the scent of a predator. A second campaign launched, and raised twice the cash in half the time. Then a third. In the blink of an eye, here came the new, new thing: Crowd-funding private security gone viral.

The Rockridge news rocketed around the Internet, first picked up by Sam Roudman at TechPresident and then amplified by Valleywag. Paul Liu's campaign hit a nerve. The sight of a relatively affluent community in Oakland paying for its own security with a collective mouse-click simultaneously demonstrated the enormous potential of crowd funding as a tool while confirming the worst fears of those who worry that new technological innovations are fueling increasing class stratification.

The timing couldn't be more appropriate. Now, more than ever, government at all levels in the United States is underfunded and increasingly dysfunctional. Against the backdrop of the current federal government shutdown, is it any wonder that we'll grab any tool at our disposal to attempt to get things done? The promise of what is now called "civic crowd funding" -- the direct mobilization of citizen dollars to address community concerns -- is inherently seductive.

But it is also threatening. In a worst-case scenario, the civic crowd-funding efforts springing up to fix broken governments may end up facilitating a kind of backdoor privatization of government services. The further that goes, the more our faith in the political process, or our willingness to pay taxes in the first place, will erode, weakening government even further. And what happens, then, to the residents of communities that can't afford to spring for their own security patrols?

I live in West Berkeley, just a few miles from Rockridge, the north Oakland neighborhood that is ground zero for the current outbreak of crowd-funded security campaigns. Nestled at the bottom of the East Bay hills adjoining the south Berkeley border, Rockridge isn't an enclave of millionaires who'd rather wall themselves off from the rest of the Bay Area in a gated community. Nor is it a stronghold of libertarians, seeking by any means possible to chip away at the oppressive government nanny state. Like any other upper-middle-class neighborhood in Berkeley or San Francisco, it's chock-full of liberals, who by and large have proven themselves more than willing to pay taxes in support of activist governments.

As Paul Liu told me, "In the long run, it really should be the city government providing what is intrinsically a public good. In the short run, I would say that almost all who have contributed are doing so because this is a concrete action that they can take to enhance public safety in the neighborhood, not because they want to in the first place, but because they feel their hand was forced by the lack of responsiveness from city leaders."

Fair enough. But from my vantage point, just a couple of miles to the west, the picture looks a little different. The class and racial demographics of southwest Berkeley offer a stark contrast to Rockridge. It is difficult to imagine a crowd-funding campaign for private security taking off here. Disposable income is just too tight.

The worry that civic crowd funding could exacerbate class inequities was articulated a little over a year ago by Ethan Zuckerman, the director of the Center for Civic Media at MIT. "Unless done very carefully," he wrote, "crowdfunding a city’s projects is likely to favor wealthy neighborhoods over poor ones. People in poorer neighborhoods have less to spend on crowdfunding projects, and are less likely to have Internet access." So Brooklyn gets a lot of parks and the Bronx gets zip. Rockridge gets security patrols and East Oakland gets ignored.

But the potential long-run concern is even more dire, and particularly relevant at a moment when the federal government is shut down, and conservatives are dead set on eviscerating the federal budget.

But unfairness isn’t the only problem. If crowdfunding parks succeeds, it supports the case that governments don’t need to build parks because they’ll get built anyway through the magic of civic crowdfunding. That, in turn, supports the Norquistian argument for a government small enough to drown in a bathtub, with services provided by the free market and by crowdfunding a thousand points of light.

Rodrigo Davies, a graduate researcher at the Center with Zuckerman who is studying civic crowd funding, suggests that one of the reasons why "people are so unsettled" by the Rockridge private security efforts is the speed at which the process is moving.

"It's the contagion effect -- the fact that you had one campaign and then within three days, two further campaigns, and the second outstripped the first. If you think the spread of private security is problematic and undermines public services then what crowdfunding does is make that problem arrive more quickly and spread more quickly."

James Beshara, the founder and CEO of Crowdtilt, sees what's happening in Oakland as one more data point confirming that crowd funding is positioned to have a major, positive impact on society.

"The phenomenon of people collaborating on how we spend our dollars is about to explode," says Beshara. "Right now, there isn't enough communication about how, exactly, our tax dollars get spent. With the coming of the Internet we got a very effective mechanism for the dissemination of information. Add crowd funding to the equation, and you have an easy way to collaborate on how to spend our financial resources. That will create a much more effective and efficient way to allocate those resources.

Beshara dismissed the critique that civic crowd funding could end up disproportionately benefiting wealthier neighborhoods, calling it "a manufactured controversy."

Beshara is entirely correct that civic crowd funding will be a force to be reckoned with. Because, in principle, there is absolutely nothing new about what is happening, at the most basic level. Communities have always been pooling their resources to raise funds for specific purposes. It happens at every PTA meeting. Rodrigo Davies tells a fascinating story about how the Statue of Liberty might never have ended up in New York if not for the efforts of a crowd-funding campaign organized to pay for its erection by the publisher of the New York World.

The most significant difference between now and then is how much easier our new tools are to use. We are no longer required to endure the drudgery of trudging door-to-door to personally solicit funds. We don't even have to bestir ourselves to physically attend a town hall meeting. To borrow one of Silicon Valley's favorite metaphors, the process of collectively raising funds is now "frictionless." Or, as Davies put it, "the barrier to entry has now been made as low as imaginable." Anyone can raise money for anything! So nothing could be less surprising than the sight of a highly computer literate San Francisco Bay Area population turning to crowd-funding tools in the hopes of addressing issues of local concern.

Civic crowd funding is too easy to do not to explode. Beshara has every right to be excited.

But the notion that civic crowd funding in affluent areas will free up resources for poorer communities rests on less solid ground. It ignores the fact that the bulk of those resources come from taxes paid by citizens in the affluent communities in the first place. And sooner or later, people are going to be wondering, even in the liberal bastions of the Bay Area, why they should be paying twice for the same level of service. Governments struggling under constrained budgets will only come under greater pressure. Zuckerman's Norquist reference is more appropriate than ever in the current context. If you strangle government, and push more people to local solutions, then government shrinks further and has even less ability to fund desperately needed public services.

Like it or not, one of the functions of government is a mechanism for redistributing wealth from one community to another other. A representative democracy, in theory, weighs the greater good, rather than simply satisfying the immediate desires of who is paying.

In theory. Obviously, one of the forces pushing civic crowd funding forward is the utterly justified perception that government isn't performing its job effectively. Our tax dollars end up channeled to special interests or spent on useless wars or utterly wasted.

The efforts of conservatives to actively break government don't help. In the current context, suggests Davies, it is more appropriate to see crowd funding as a necessary response to broken government, rather than a potential weapon for smashing the state into even smaller smithereens.

"It's possible to see crowd funding undermining the use of tax dollars for things like public art or parks," says Davies. "But so many communities have seen cutbacks in those areas, that at this point in time crowd funding is more likely to be seen as preserving those things, rather than trying to supplant government. If we were at a point where government could easily afford to fund things like the arts and social programming and those services weren't being cut everywhere then there wouldn't be a need for crowd funding at all."

"I think the line to draw is in front of the types of things that you expect government to do. We need to be careful not to erode those core services."

Which brings us back again to the question of public security and why the Rockridge crowd-funding campaign started by Paul Liu sent jitters through the Internet. Only the most hardcore libertarian would dispute that providing for public safety is a core government responsibility. If government fails to accomplish that, what's it good for anyway? And since Batman isn't around to help, civic crowd funding might be our best option for locating a caped crusader.