Blue-state nation: Maybe it's time for cities to secede 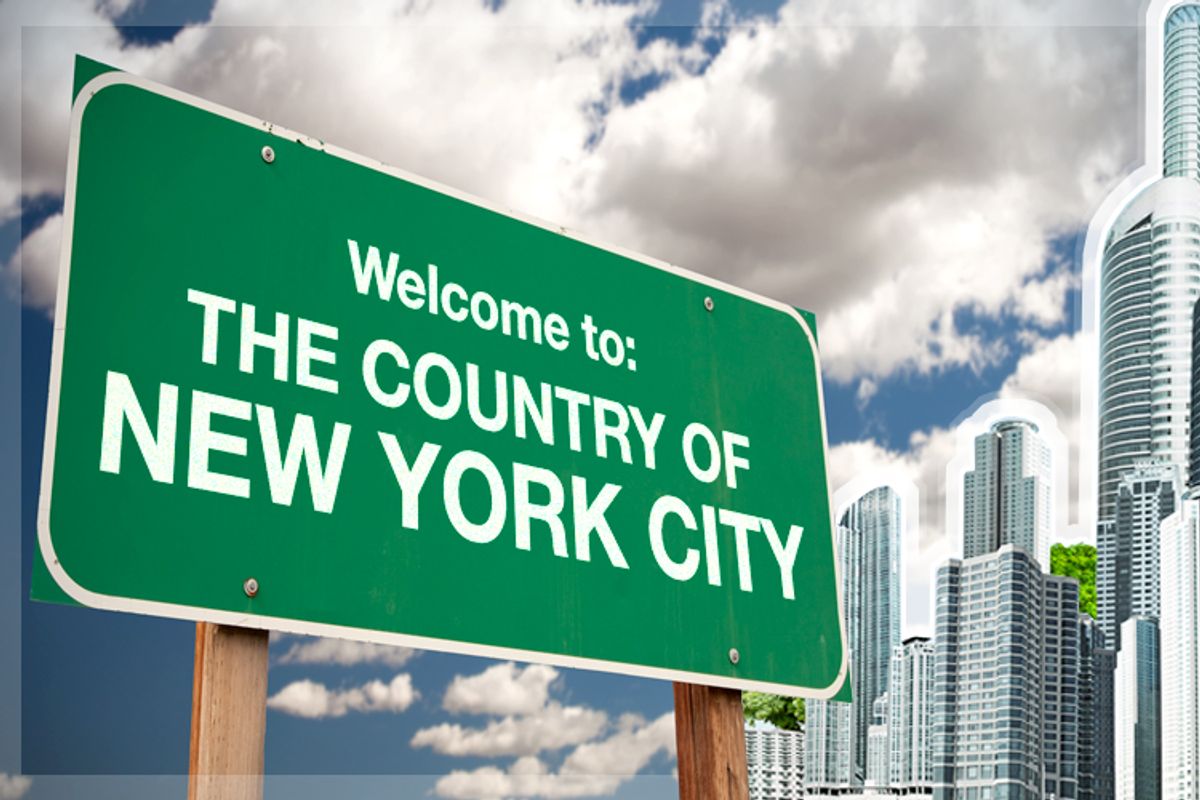 The Tea Party is pleased. The sequester? All hype. The shutdown? More of a "slim down." The debt limit? No big deal. For the GOP's rural base, the non-effect of federal dysfunction is proof they're better off managing their own affairs. If the sky is falling, why aren't we seeing stars?

In the nation's cities, where "tea party" remains a game a child plays with dolls, the reaction to the government shutdown has been closer to disgust. But the takeaway, at least in one respect, is similarly optimistic: cities feel they're doing government better than Congress. As the federal shutdown entered its second week, there was a fair share of comparative satisfaction on this end of the geographic and political spectrum as well. For years, city officials and urban theorists have heralded the arrival of the metropolitan area as the most dynamic unit of American governance and economic growth. What better endorsement than anarchy at the Capitol and order in the streets?

Many of the most celebrated advocates of what Bruce Katz and Jennifer Bradley have called the "metropolitan revolution" were gathered this week at the CityLab conference in New York. The title is a nod to a beloved aphorism coined by Supreme Court Justice Louis Brandeis, who wrote that states are the laboratories of democracy. These days, the thinking goes, it's the city that tests policy solutions.

In an article covering the CityLab kickoff, "In the Government Shutdown, Mayors See a Moment to Shine," Emma Green noted the reaction of New York's Michael Bloomberg, the nation's most influential urban experimentalist. "We certainly aren’t waiting for national governments to lead the way, because we would be waiting for a very long time," Bloomberg told an assembly of mayors, policy wonks, planners and journalists. "We are pioneering new ideas; they are paralyzed by dysfunctional politics. The fact is, Washington is increasingly unresponsive to the needs of our country, and cities are filling the void in a very big way."

On the one hand, the contrast was an easy one. In this awful week (month? year?) for the American federal model, even the lowly co-op board looks efficient by comparison. On the other, the revolutionaries are right: political and economic power is increasingly concentrated in urban areas, both in the U.S. and abroad.

But as the shutdown drags on, with the prospect of default around the corner, is federal dysfunction bolstering the case for metropolitan self-sufficiency, or revealing its flaws?

The thesis of "The Metropolitan Revolution," Bradley and Katz's book of case studies, is that metros aren't just an able stopgap but a long-term substitute for Washington's inefficiency. They cite a diverse range of American cities taking initiative in the absence of federal leadership: Portland's sustainability programs, Los Angeles' ambitious transit projects, Miami's outreach abroad, and so on. The idea that cities and other sub-national entities can craft their own foreign policy even has a name: paradiplomacy.

The broken state of the federal government is no friend to innovative urban policy, but neither is it an insurmountable obstacle. Would it be nice if Congress passed comprehensive immigration reform? Of course. But in the meantime, New York will let non-citizens vote, and Los Angeles will help undocumented immigrants access banks, healthcare and even drivers' licenses.

Is the shutdown a break too far? At first glance, it has looked like just another example of local leadership filling the void. In a post last week, "What Government Shutdown? Metros Open for Business," Katz cited the crisis as a paramount example of the transfer of power and responsibility to the local level of government. Philadelphia mayor Michael Nutter, speaking on Oct. 1 at the CEOs for Cities conferences in Grand Rapids, Mich., praised the city as America's last functional unit of government. He joked: "Am I going to pass a continuing resolution as to whether or not we're going to move snow?"

It’s a lay-up, but it's true that life in the American city has gone on without apparent interruption. Unfortunately for President Obama, who has been hoping public opinion will stir House Republicans to action, the symbol of no federal government has thus far been the National Park System.

Yet no city is an island, and swelling pride in urban governance may yet be dealt a reality check by Congressional inaction.

The cracks lurk beneath the surface. For cities with high proportions of federal workers, lost wages could cut into the income tax base. (It's not yet clear whether workers will receive back pay for shutdown days.) That spells trouble for cities besides D.C.: in Colorado Springs, Virginia Beach and Honolulu, the federal government has a larger employment share than in the capital region. Larger cities like San Diego and El Paso are not far behind.

Even if the 770,000 nonessential employees are eventually paid, the paycheck hold will soon affect over 2 million people and reverberate through local economies. The sharpest drop in consumer confidence since the collapse of Lehman Brothers has retailers worried about the vitality of the holiday shopping season, whose prospects would weigh heavily on metro areas dependent on sales taxes and on seasonal workers dependent on jobs. Breaching the debt limit, needless to say, would be an unqualified disaster for U.S. cities.

More pressing, perhaps, is the importance of the federal safety net. While operational transit, police, fire and sanitation continue to give the appearance of a functional city, the bottom will slowly drop out as funds for programs like Head Start and the Special Supplemental Nutrition Program for Women and Children run dry. The Low Income Home Energy Assistance Program, for example, is on the verge of closing down in states like Massachusetts and Wisconsin just as temperatures begin to drop.

“Cities are not waiting for the federal government, they’re stepping up,” Bradley says. “But you also see how much better things are when cities and metros do have that reliable partner.” The U.S. Department of Housing and Urban Development, for example, which endorses a quarter of all home loans, has furloughed 96 percent of its staff and warns applicants to expect delays.

And then there’s Washington, D.C. As a center for federal employment, the District has a lot to lose from the shutdown. As a ward of Congress, however, it has a lot to gain from publicly asserting its functional independence. Since the 143-year-old Anti-Deficiency Act forbids the District from funding its own operations without Congressional approval, its government will lose the ability to maintain services like transit and garbage collection starting sometime next week. D.C. residents voted in April for the right to freely spend their own tax revenues, and some officials have argued that the current crisis offers Mayor Vincent Gray a perfect opportunity to protest the inanity of Congressional budget control and place District autonomy in the national spotlight.

But Gray seems reluctant to disobey the law, even as negotiations with Congressional leaders stall. Without emergency legislation, he says, the city is on the verge of an unprecedented crisis.

Even as enthusiasm grows for metropolitan governance, real self-sufficiency for cities is no more common than when Norman Mailer ran for mayor of New York on a 51st State platform back in 1969. The city-state remains an attractive concept, but the quest for autonomy is, for now, a rural phenomenon. Amidst all talk of metropolitan revolutions, it’s 10 rural counties in Colorado that will vote on secession next month -- not one of the nation's cities.