Student-teacher romances are anything but 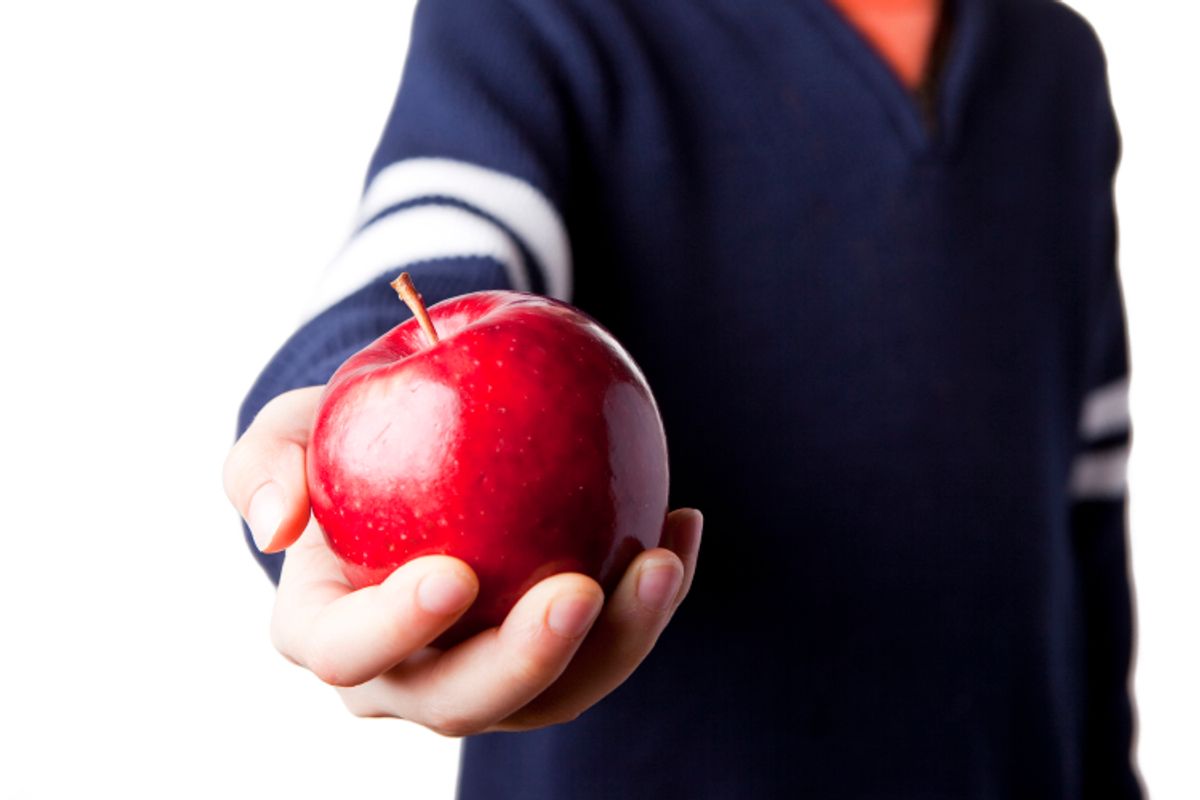 Fall! Pumpkin-flavored everything aside, those of us (un?)fortunate enough to be still mired in academia are thick in the frenzy of a new school year, which means — imagine now a glittering Hogwarts-esque montage — fresh papers, fragrant books, hallowed halls, shiny wooden seminar tables, and the inevitable frisson of making eye contact with your hot professor. Those of you already graduated and gainfully employed, feel free to reminisce. The intellectual charge, the heady thrill of transgression...

What is it about teachers, anyway? Or: what is it about students and teachers? There’s the rub. Spend enough time asking around on any university campus, and you’ll get the lowdown on all the scholars purportedly mingling between the sheets. Somewhere as I type this, a coed is blushing. Okay, that coed is me.

But if my introduction doesn’t ring true, if you’ve never glanced shyly up from your notebook or laptop screen to a smoldering professorial stare — well, there’s probably a good reason for that. As alluring as they seem, or maybe because of it, student-teacher affairs are primarily appealing as a novelistic endeavor. The phenomenon is most salient in fiction, genre or otherwise: Goodreads has almost 2,000“Popular Student-Teacher Romance Books” shelved, just to give an impression of the trope’s scale. It’s also a recurring plot point in many a televised teenage drama.

By turns playful and sinister, the student-teacher relationship has had a long place in history.

There’s Zeus and Ganymede, the mythological, erastes/eromenos relationship of the ancient Greeks; similarly, the tragic love story of Achilles and Patroklos; the equally tortured Heloise and Abelard, whose love affair spanned 20 years of letters; in literature, there’s David Lurie’s tryst with Melanie Isaacs in Coetzee’s Disgrace; then there are the mythologized real-life examples of Martin Heidegger and Hannah Arendt and, more scandalously, Mary Kay Letourneau and Vili Fualaau. These days, we have the predatory protagonist of Tampa, the novel by Alissa Nutting, Ezra and Aria’s illicit relationship in the television series Pretty Little Liars, and Julie Taylor’s misadventure with her TA in the final season of Friday Night Lights.

So from whence does this plot point spring? Why do we thrill at it? Why do we find it so emotionally taut, so satisfying? Hot for teacher — which, until the writing of this piece, I didn’t know was a Van Halen song— taps into all the taboos that make our kinks work. There’s power, there’s authority and institutions (which is always hot). There’s illicitness, there’s control. There’s the porousness of the public/private dichotomy, the thing that makes exhibitionism and voyeurism two sides of the same coin. There’s the constant appeal of doing what you’re not supposed to — which, in fiction, you are allowed to participate in, and even root for. If it’s just outside the realm of possibility, you want it even more.

Fiction reflects society as much as the daily news, if not more so, but it’s also a place to sublimate, to be guilty, to write (or read) the things that appeal only in the golden-hued edges of literature. Fiction is where well-crafted stories that tug on psychological tensions also tug at our heartstrings; it’s also where people turn into wolves. That is, there are some things written that are better left undone.

In the case of student-teacher affairs — a scenario I’ve neglected to address from the instructor’s perspective, I’ll admit, though many friends of mine are young TAs and dealing with these same slippery slopes — it almost seems as though literature and reality fuel the trope in tandem, one after the other. It’s easy to make one’s life a story, where everything feels like a novel, and in a culture in which our fiction is saturated with such narratives, why not hook up with your hot professor? Pop culture likes to present student-teacher affairs as tantalizingly possible, even equitable somehow — particularly distressingly in the relationship between Ezra and Aria in Pretty Little Liars, involving a high school student and her teacher.

There’s been much criticism of the student-teacher affair in literature, particularly in that when crafting such narratives — emotionally satisfying or no — we leave the door open for susceptible young people to get involved in situations beyond their control. In a review of Nutting’s Tampa, Charlotte Shane writes of the novel’s predatory female teacher:

But when I think of the real-life victims of such a figure… the seriousness of the damage done to them contrasts sharply with the odd weightlessness of this novel. And as a novelist Nutting should be beholden if not to correctness than to reality.

Here is the crux of the matter: fiction, though experimental, though exploratory, though a place where anything could and should happen, also finds itself bound to the power of storytelling. And these fantasies, when enacted, bear consequences. We love the idea of hot for teacher, because it’s thrilling and fun and often makes for great dramatic narrative — but only when it happens between the pages, not between the real-life sheets. The student-teacher affair is only viable when it remains in the realm of the imagination. Cases in the news illuminate the warped power dynamics and intimacies in student-teacher relationships, which prey on the party with less authority. There’s a tangle in there, one that’s alluring in fiction and ensnaring in real life.

So: fall! Put on your scarves and sweaters; sweep up your books; have that pumpkin spiced latte, or ale, or donut. Walk across the quad, live that campus novel life, but perhaps stop short of sleeping with you-know-whom. The trope of hot for teacher has long been a mainstay of fiction, and that’s also the place it works best.

Larissa Pham is a writer living in Brooklyn. She has written for Adult, Guernica, The Nation, and Nerve. Pham studied painting and art history at Yale University.