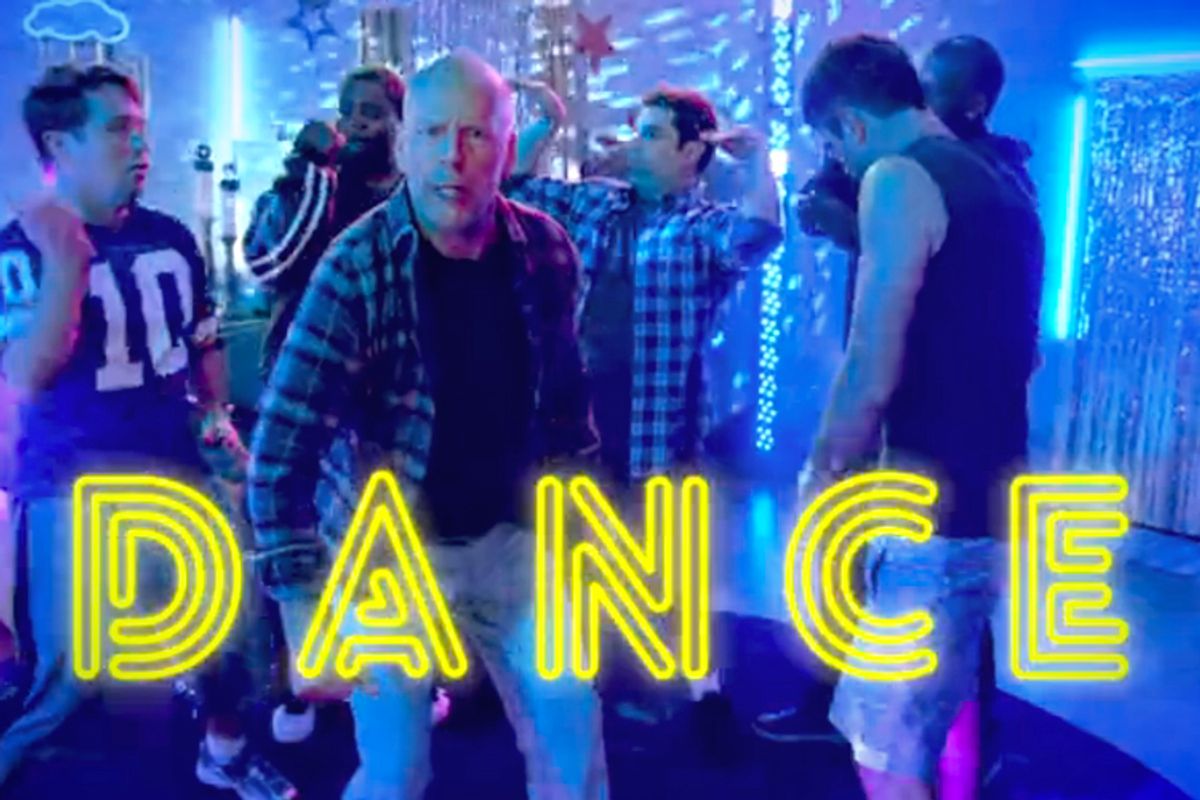 "Saturday Night Live" doesn't have a robust history with its depiction of gay folk -- and the straight comedian Taran Killam is doing his best to ensure that the uncomfortable legacy lives on.

Killam, who's been on the show since 2010, specializes in sketches depicting effeminate men or men engaged in activities that aren't what you'd expect from a robustly built, ostensibly straight man. Consider his portrayal of a sassy gay prince in the "Real Housewives of Disney" sketch (every other character gets really snappy, cutting jokes playing off a "Housewives" archetype; Killam's joke is that he's gay). On last week's episode, featuring Miley Cyrus, Killam played the only male cheerleader on a cheer squad; wearing a shirt that barely covered him and pouting and voguing, Killam cheered, "I like to cheer / Deal with it, Dad." And on this weekend's episode, hosted by Bruce Willis, Killam dances with a group of his friends, declaring "It's not homoerotic, just a call for brotherly unity."

The thing is, it is homoerotic -- a badly executed mishmosh of bodily ogling, as male cast members twerk and shake Killam's graphically rendered penis-in-gym-shorts in one another's direction. A bunch of straight guys dancing together because it's funny to act like gay people do, with the explicit instruction that it's nothing so gross as homoeroticism! The term "No homo," used after a compliment directed at another man, is tired to the point of exhaustion in music, but to Killam and his cohort, it appears to be the pinnacle of comedy.

The template for an "S.N.L." gay joke goes like this: Take a straight male comedian, have him put on effeminate airs or kiss another guy, the end. While most characters on the sketch show get a weird quirk or game, the gay characters are funny because they act like girls or want to kiss other boys, yuck!

Strictly speaking, this isn't exactly on par with the systematic bullying of gay teens across the nation as an issue about which Americans ought to be enraged. But the mindset underpinning a sketch like "Boy Dance Party" is at once not bigoted but definitely not gay-friendly; it presumes that attraction between men is farcical and weird, not for folks like you, watching, or I, performing onscreen.

The show tends to read like something produced without any gay voices urging a re-think. Consider the "Stefon" sketches, written and performed by straight men, which grew more and more baroque in depicting gay club kid Stefon's attraction to Seth Meyers and Meyers's insistence that Stefon give travel tips for "normal families." This after head writer Meyers was compelled to respond, in 2008, to criticisms of the show's reliance on gay-baiting sketches, with eight in a single episode:

I will say you don't love hearing, in the blogosphere or anywhere else, that people feel like you crossed a line. When that happens you step back and say, 'Well, did we do anything?' But I look back on this one and I stand behind everything that happened.

Indeed, though gay sketches no longer comprise the vast majority of any episode, Meyers has stood by his earlier work by maintaining the same themes. Imagine if every black character on "Saturday Night Live" were played as an exaggerated stereotype -- by a white person. That's how it looks when gay or gayish people are, again and again, trotted out for comic effect and played by straight folks.

Then again, who would play a gay character on-air? In terms of openly gay cast members, the show's been somewhat limited -- Kate McKinnon, currently on the show, is the first out star in Studio 8H since Terry Sweeney in the 1985-86 season. While there have been gay writers on the show, one wonders why they didn't tell whomever wrote the "cheer squad" sketch that a joke about how embarrassed an effeminate man's father must be feels like comedy from Terry Sweeney's era, or that you need a joke other than how weird it is that guys might want to dance together in order to have a sketch that's laughing at something other than a sizable portion of the viewing audience.