A photographer documents the often deplorable conditions at zoos around the world. Plus, a slideshow of his work 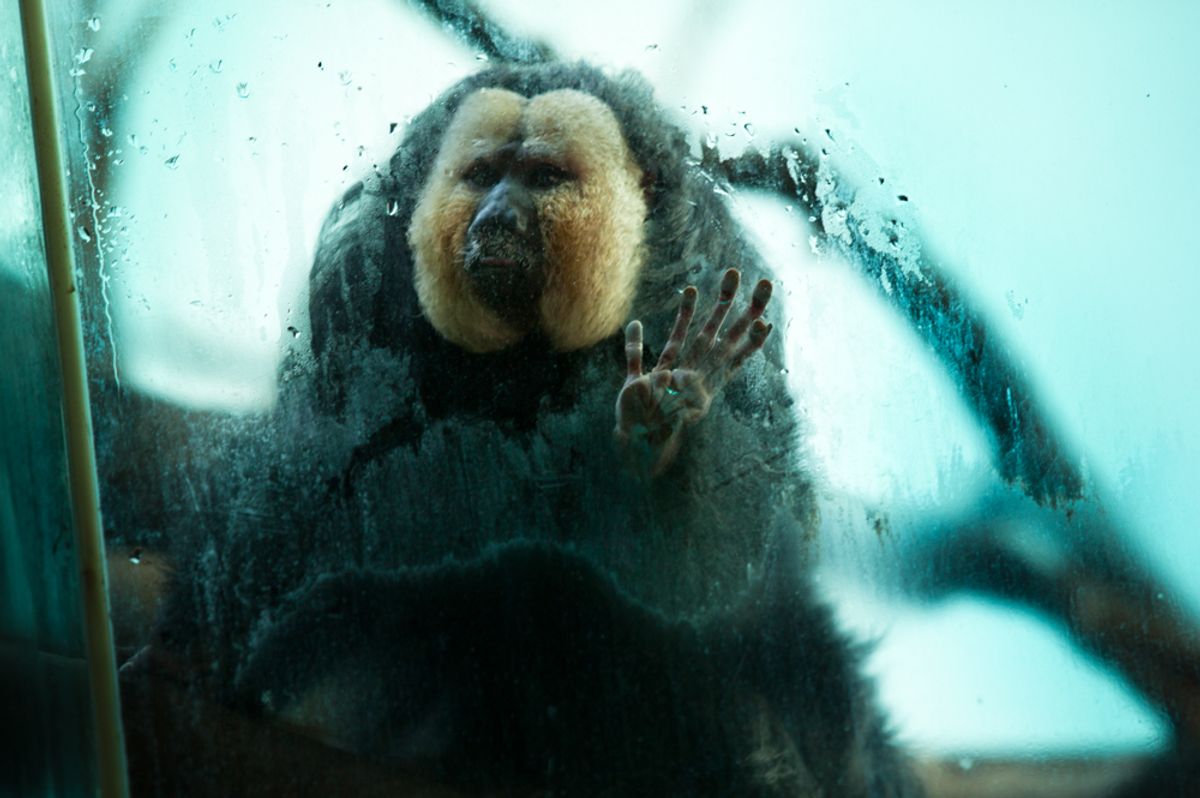 "Captive" is a photo series documenting zoo animals in their unnatural environment. It is not about the animals, but rather, it documents what can happen when humans use animals for display and entertainment. Many zoos need to be commended for their efforts to provide adequate habitats for their animals, but even in the best of zoos, there always are animals who never see daylight, only see vegetation if it is painted on the walls, or live in enclosures which are too tight for their needs. (Gaston Lacombe)
--

Should we feel weird about visiting zoos? Some animal rights activists decry the practice altogether, but many zoos are dedicated to conservation and research, to educating the public and to helping humans connect with nature. In the United States, a number of laws and regulations aim to ensure the well-being of animals in captivity.

Still, there's something unnatural about placing animals in artificial environments and turning them into a source of entertainment. And while there may not be anything inherently evil about it, there are some zoos that do far worse by their wild residents than others, says photographer Gaston Lacombe.

Since 2009, Lacombe has been exploring the strange dynamic that occurs when wild animals are placed in man-made habitats for a series he calls "Captive." As part of an ongoing project, he's visited 21 zoos, in nine countries and five continents, which gives him a nuanced perspective on the dicey dynamics of animal captivity. Lacombe spoke with Salon over email about some of the heartbreaking things he's witnessed, and shared photos from his project, below.

When did you start collecting images of zoo animals, and what gave you the idea for this project?

I love animals, and like most people, I would go to zoos to see them up close. Sometimes I would take photos, some other times not. The moment that I can pinpoint as when I started to see things differently was when I photographed the small owl perched on a cactus. I had a strong feeling looking at this owl that something was wrong.

That is when I looked beyond the animal, to see that it was placed essentially in an office environment. The fluorescent lights, the plastic grid over them, the green painted wall, everything about it said "office" and not "animal habitat." From that moment on I started to pay attention to animal habitats, and photograph them for this series.

Are most zoos more or less the same, or do they vary a lot depending on the country/culture?

They vary greatly, and to a certain extent country and culture do play a role, but not as much as you would think. Another factor that influences this variation, and very often the most important one, is commercial interest. However, I feel strongly that the problem of animal mistreatment in zoos in not restricted to a few nations or regions -- it is global, and should be seen as such. Every zoo I visited had issues, some more than others, regardless of who owned it or where it was located.

In North America and western Europe, to be sure, in general zoos tend to pay to more attention to the needs of their animals. However, even in the very best of zoos, there are always animals that get worse treatment that others. The larger, more attractive, more "ticket-selling" species will get larger and better adapted habitats, while the other species -- birds, reptiles, small mammals -- will still get small cement-and-glass boxes, with little space, no daylight and no vegetation (unless it is painted on the wall). In addition, in North America and Europe, there is also the rampant phenomenon of the private zoos. For example, from where I live in Washington, D.C., I can get to approximately 15 small privately owned zoos within a 2-hour drive, and I have yet to see one that is anything more than atrocious: small enclosures, sick animals, poor nutrition and the use and abuse of animals (petting farms, rides, shows, etc.). In fact, some of the worst zoos I have seen in this world were these private zoos in the U.S. and Canada.

In South America, Eastern Europe, Africa and Asia, it is true that the general culture towards animals is different, and zoos there tend to be less adapted to the animals' needs than in the large western zoos. The mentality there, generally speaking, is about showing off a collection, and presenting the animals as trophies. A lot of these zoos as well have little or no control over what the public feeds their animals, or even encourage the public to bring food for the animals, leading to diseases and malnutrition. So, yes, I have seen terrible, cruel scenes in zoos in lesser developed countries, and it does have a lot to do with the general culture towards animals and how they can or should be treated. But I've seen the same thing right here in North America too.

In your experience, are deplorable conditions the norm?

Yes, overwhelmingly. For every zoo that makes the effort to provide one animal with a well-adapted enclosure, there are 1,000 others that don't provide any comfort to all of their animals. When I show these pictures, some people try to convince me of the opposite, and pick out the exceptions to try to prove me wrong. But honestly, these are always just that, exceptions. It is great that there is a movement now in some zoos to provide better habitats for their animals, but that is still rare, and I still feel that nearly all zoos can easily and fairly be painted with the same brush.

Do you have any specific examples of the worst zoos you’ve seen?

The worst I ever saw was in the southern Philippines. It had been owned by a cult leader, who collected animals to create what he called his "Paradise of the World." He passed away, but his animal collection is still there, managed by his followers. All animals, without exception, were kept in the most horrendous conditions, and many were dirty, diseased and showing clear signs of distress. There was even a very rare jungle cat, in a hanging cage that had no solid floor -- just a metal grid. So that cat never even got to put its paws down on solid ground, and could barely sit up in its cage. It was just awful.

That said, I went to visit two smalls zoos in my native province of New Brunswick in Canada this spring. I can't say they were that much better than that zoo in the Philippines. There also, inadequate habitats, small enclosures, sick and distressed animals ... it was quite disheartening to see that this poor treatment of animals was not just something foreign, but part of my own culture as well.

What do the good zoos do right?

First and foremost, good zoos will not take on more animals than they can handle or adequately house. I've seen a couple of zoos where they might have just nine or ten species, and that might make them less commercially attractive, but they provide the best care they can to these fewer species. They give them enough space to roam, to run, to walk around. They provide birds enough space to fly. Not just open their wings, but really fly! They provide them with shade, shelter, hiding places and variety of landscape if necessary (water, rocks, trees, etc). They also only take on animals that are adapted to their climate. Seeing a polar bear literally dying of heat in over 100-degrees F weather in Argentina was one of my saddest moments. In my opinion also, good zoos should only take in animals that would not be able to survive by themselves in the wild.

You say that your project explores what happens when people use animals for display and entertainment. What, in your opinion, do people fail to appreciate about wild animals?

I think that most people fail to understand that many animals, especially mammals, are emotional species. Maybe they are not as sentimentally sophisticated as humans, but they still feel. More and more I have been seeing articles in the press about this -- about how elephants, or killer whales, or bears, or primates and a slew of other animals show clear demonstrations of complex emotional lives. When we keep these animals captive, we traumatize them emotionally. They pace, they harm themselves, they get violent... I've seen that happen dozens of times.

A lot of the animals in your photos look pretty depressed -- is that intentional on your part?

I wouldn't say depressed. I intentionally try to get the animal in a peaceful pose. I don't want the viewer to be confronted by the animal, I want them rather to be confronted by the habitat surrounding the animal. So I wait for the animal to be calm, peaceful, maybe a bit detached from the scene, and then I take the photo. I think "sadness" is more something that we as viewers project into the photo, since, maybe, unconsciously, we imagine what our lives would be if we were forced to live in such conditions.

What kind of response has your project gotten, from zoos and from the people who visit them?

I haven't received any response from zoos. From the public, however, I've received a lot of feedback. Many people have written to me to explain both sides of the argument. I've received many messages from people who want to see all zoos closed, since they feel it's all about commercial interests and nothing good can ever come out of them. I've also had a few messages from people saying I should go visit this zoo or that zoo, since they do things "well" there, or to show that not all zoos are bad. However, the best interaction I've had with the public was during a two-week exhibit of this work in New York City this September, at Photoville, where 58,000 people came through. I had the chance to be at the exhibit nearly all this time to talk to the visitors, and see their reactions. Many people left my exhibit in tears. Most people commented on the way out: "beautiful photos, but horrible topic, I hate zoos." The consensus was clear that this is horrible, and that something should be done.

I also feel that something should be done and I want my photos to be part of the effort to reform and rethink zoos. I think that it is futile to ask for all zoos to close, since it is never going to happen. Rather, I think it would be more productive and realistic to talk about reforming and rethinking zoos, to make the lives of these animals better, and still capitalize on the great education potential that can exist in a zoo.