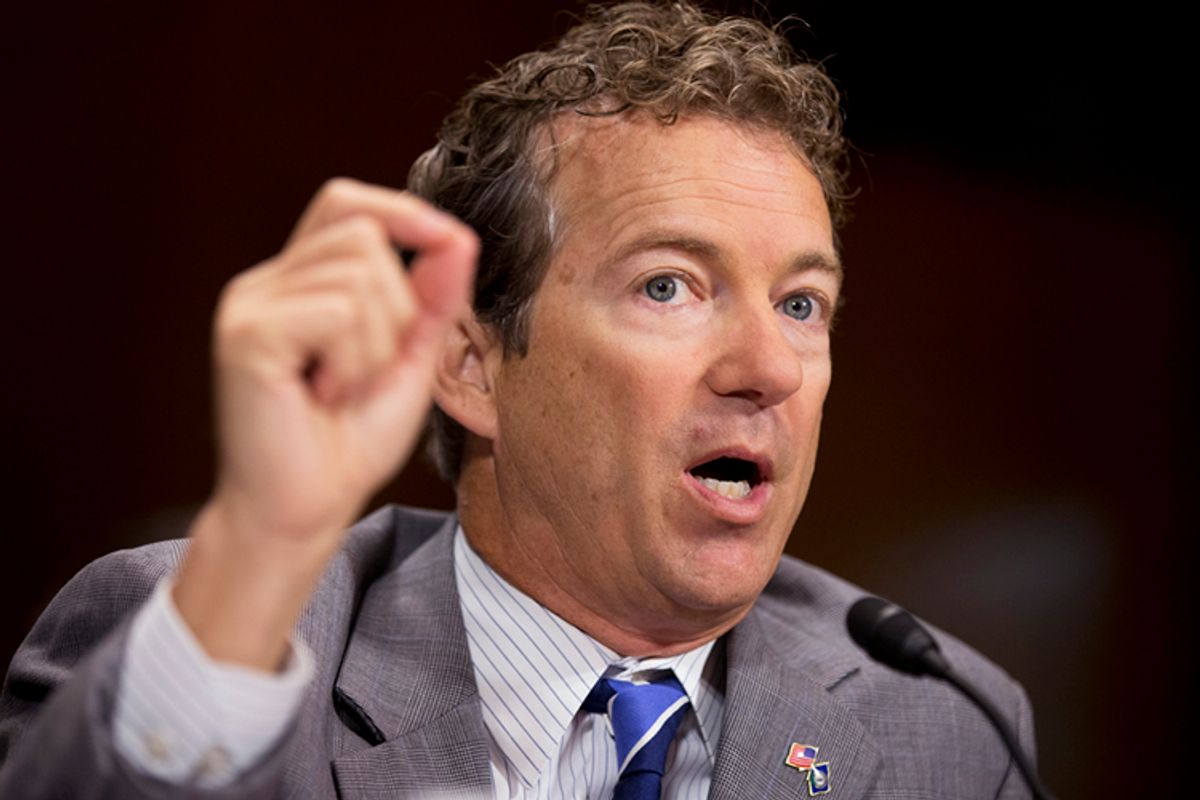 We don’t know each other, but I’m writing because you’re one of the many people who wrote to me in response to a piece I wrote recently ("11 Questions You Should Ask Libertarians to See If They're Hypocrites").

A lot of people responded. Some of you made reasonable points, while some of you simply ranted. A frightening number of you expressed hostility to democracy itself.

I don’t know your name, your age or your life story. But I’m addressing this to you in the hopes that we can get to know one another a little better.

I’m writing because you wrote a blog post, or addressed me on Twitter, or made a YouTube video about what I’d written. Or maybe you sent me an email. I’ve learned that you guys use Internet technology quite a bit. That’s no surprise, since the Silicon Valley is swarming with libertarians. But it is somewhat ironic, don’t you think, that so many of you disseminate your opinions on government-created technology? (Defense Department research created the Internet.)

What’s even more ironic is that so many Internet billionaires (I’m looking at you, Peter Thiel) are extremist libertarians in their views. They support their views with wealth they’ve accumulated using government-created technology, government-protected patents, a government-educated workforce, and consumers who are protected and educated at government expense.

I called that hypocritical in my last piece, which made some of you angry. Hey, it’s my opinion! Sue me, as the expression goes. (Wait: as libertarians, I suppose you can’t literally sue me. Courts are a government entity.) But I’m not writing this letter to pick a fight. I want to address those libertarians who were essentially courteous and respectful. You wrote thoughtful responses to my piece, and I’ll respond to some of your specific points shortly.

But first, let me say that I appreciate the dedication so many libertarians have shown in defending civil liberties and opposing the militarized state. I wish that liberals had been more steadfast on these principles since Obama took office. Ron Paul was the only 2012 presidential candidate to speak the truth about US military intervention, and Rand Paul’s anti-drone filibuster was admirable.

I also appreciate and admire your willingness to reject conventional thinking. We should never stop discussing new concepts, however radical. Ideas are beautiful things when they’re well constructed, and some libertarian ideas are admirable in their construction—even if I find them sorely lacking in real-world situations.

Finally, libertarians have also been great allies on the subject of Wall Street and large corporations, especially when it comes to ending their government funding, their implicit subsidies and exemptions from prosecution.

Before we continue, an anecdote: I went on a talk show to discuss banking reform with one of the guys from  Reason magazine, and in the kitchen afterward we were both surprised at how much we agreed. He was funny and imperturbable. We decided to air our differences over coffee.

I said “You people are 60 percent great, and 40 percent irrational.”

“Talking with you guys is like being on a first date that’s going really well, until all of a sudden she starts talking about her alien abduction and how space people are speaking to her through her fillings.”

He said, "The existence of alien life is a very real possibility."

Finally I said “Okay, I’ve told you what I think. What do you think about people like me?”

His answer: “Nice, but way too serious.”

On the other hand, there’s a lot to be serious about. It’s true that libertarian ideas can be intriguing. But political debates have real-world, human consequences. If an exciting idea doesn’t work in practice, we have a moral obligation to change our thinking.

My deepest criticism of libertarians is that they aren’t willing to change in the face of experience. This nation conducted a long experiment in libertarian economics, after all, from its inception until the mid-19th-century or thereabouts. Our economy retained many libertarian features—minimal regulations and labor laws, for example—until the early 20th century.

They weren’t the “good old days,” at least not for most Americans. It was a time of robber barons, poverty wages, unsafe working conditions, and financial instability. To return to that level of deregulation in today’s advanced industrial economy would be even worse. We’d see frequent BP-type environmental disasters, accelerated climate change, and financial crises that span the entire globe.

Triumph of the Will?

Several of you told me that economic transactions, including the employer/employee relationship, should be based on “free will.” But garment workers in early-20th-century New York or 21st-century Bangladesh aren’t allowed to exercise their free will. They either accept poverty wages and lethal working conditions or they starve. Why does an employer’s freedom to negotiate trump the employees’ right to organize collectively? “Free will” is pretty narrowly defined.

One of you wrote that, “You have a right to the product of your labors, but you can’t force someone to pay you more than what you are due.” But you can force someone to accept  less than what they’re due, if the alternative is starvation. That’s not a free and fair transaction.

You wrote that no transaction is immoral “as long as force is not involved.” But what human forces are more brutal than hunger, privation and death?

Several of you said that, in the words of one email, “The only reason big corporations are bad right now is because of big government.” That’s simply not true. Big corporations were big and bad in the 1900s, too, when the federal government was much smaller than it is today.

A lot of you took umbrage at my observation that the public lost interest in libertarianism until it received artificial subsidies from corporations and wealthy individuals. I asked, shouldn’t the “market” in ideas decide? Many of you reacted by implying that I think unpopular ideas should be suppressed. That’s not what I said. I was observing some hypocrisy in your position, not stating my own.

Remember: I’m not the one who believes in the all-knowing “wisdom of markets.” I support public education and nonprofit journalism, so that unpopular ideas can flourish without being manipulated or suppressed by big-money interests.

My question about democracy was, “Does our libertarian recognize that democracy is a form of marketplace?” This is where it was disturbing to hear some of your opinions—especially knowing they’re shared by many wealthy and powerful people.

This is a very Randian—and very wrong-headed—view of democracy. It’s absurd to suggest that a line of people waiting to vote is “rampaging,” while a line of people at the Walmart checkout counter is “preparing to make a rational market decision.”

What you call a “mob,” we call “the majority.” Your choice of language betrays a fierce contempt for “ordinary" people—that is, the non-wealthy—which is deeply disturbing. This elitism is libertarianism’s dark heart, and I ask you to reexamine your assumptions about it.

The “theft” in question is, at least for most of you, taxation. But taxes are collected in return for services provided, often more effectively and at lower cost than the “privatized” alternative.

One of you quoted Ambrose Bierce as saying, “Democracy is four wolves and a lamb voting on what to have for lunch.” Unfortunately, that useful government-sponsored resource called the Internet offers no proof (other than user-written websites) that Bierce ever said that. Whoever said it was wrong, especially in Bierce’s time. (Or Ben Franklin’s. The saying is misattributed to him, too.)

Our democratic processes have been subverted by big money and big media, two forces whose corrupting influence is often defended by libertarians. Our system is run by a few lambs. First those lambs enriched themselves, often by cheating and manipulating the flock. Then they gave the throng a choice of pro-lamb candidates and called it democracy.

Well, my libertarian friend, there you have it. You’re engaged with the world of ideas, and that’s good. I hope you stay open-minded, as I try to do, and let experience—including the BP oil spill and the financial crisis of 2008—influence your thinking. I hope we can continue to work together to resist militarism and defend our individual liberties.

I’m sorry if my last piece was too brusque or sarcastic. I’ll work on my tone. But if you think my ideas are no good, I hope you’ll take comfort in the thought that market forces should therefore crush them and replace them with better ones—maybe even yours!

PS: How about that whole Bitcoin thing, huh? Looks  kinda bad for your side right now, don’t you think? Talk to you soon.