John Boehner thought the last few weeks were rough? The coming months could present him with even more headaches 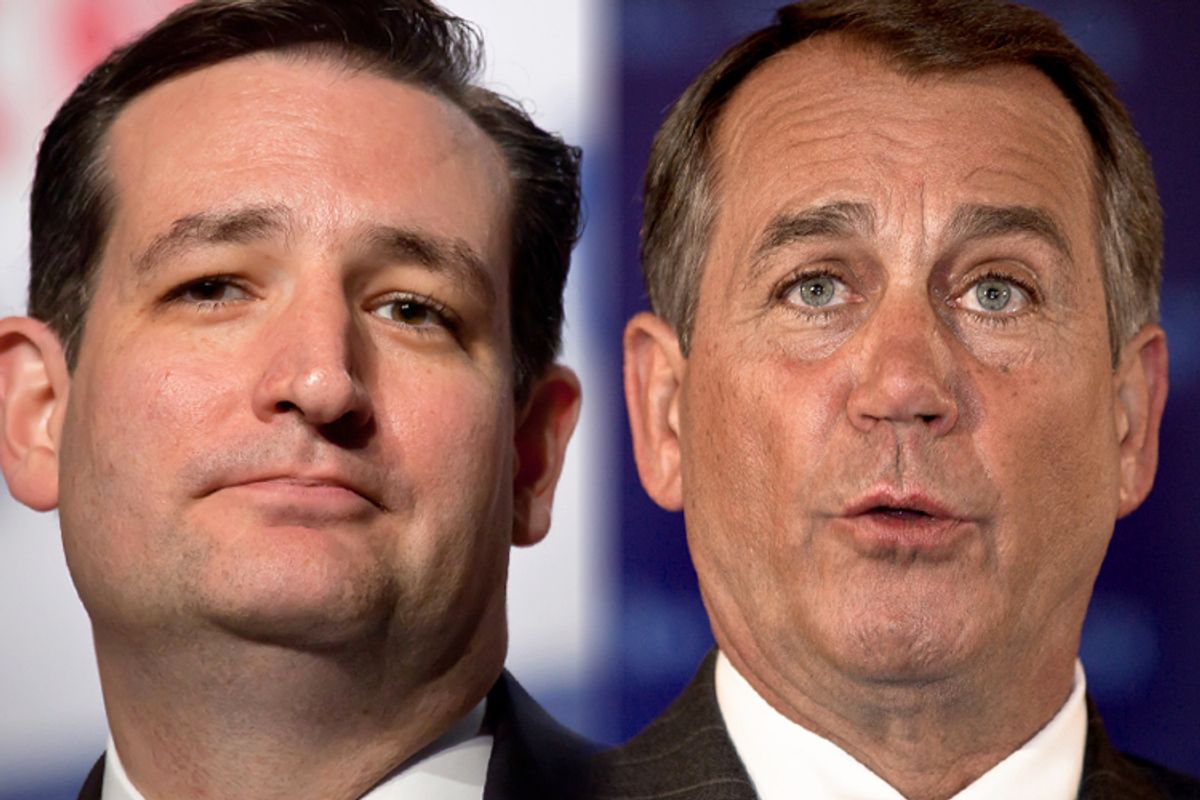 Last night, Republicans stood aside as Congress increased the debt limit and reopened the government. In return, they got nothing. Or more accurately, they got something that already existed, and gave Democrats something they'd been blocking for months.

The deal Harry Reid struck with Mitch McConnell includes a formal negotiation over the federal government, which GOP senators and various House Republicans have objected to since the spring. In exchange, Republicans got a redundant measure to assure Obamacare's existing income verification mechanisms are actually verifying beneficiary incomes (for a less bullish take on this measure, see David Dayen's take here).

It's a fig leaf, minus the properties that allow it to conceal anyone's nether regions. A fig leaf with the chlorophyll sapped out of it. Republicans can spin it among themselves as a Democratic concession, but they can't rightly look back at the ruin of the past month, and the content of the deal, and expect that they can extort unreciprocated concessions from Democrats next time around.

The questions on everyone's mind are, Will they try anyhow? And what will the coming months look like if they don't?

I think the answer to the first question is "probably not," mostly for the reasons I noted above. Republicans didn't just sacrifice an incredible amount of public cachet in this fight. Their leaders also revealed, for the second time this year, that they're not willing to actually allow the country to default just to preserve party unity or pressure the president to cave. Unless they're stricken with a nihilistic sense of bitterness and the feeling that they have nothing left to lose, there's little reason to think they're going to approach coming deadlines the same way they approached these past two.

Before you object on the grounds that the past month's events won't make conservative House hardliners any less bloodthirsty: I agree. They can't fight their nature, or their incentives, and they don't even seem to want to.

My suspicion, though, is that the right will have about the same amount of sway in the months ahead as an erratic general who led his soldiers into a massacre, then reassimilated unnoticed far down the chain of command. He's still there, he's still cranky, but other officers can now point to the slaughter and everyone will ignore his guidance.

If that's right, then you can paint optimistic and pessimistic scenarios for the winter months. The optimistic one, obviously, is that parties' official budget delegates ink some mutually agreeable deal and take the debt limit off the table once again.

The budget negotiators will have until Dec. 13 to write a fiscal blueprint, which appropriators would use to fund the government for the rest of the fiscal year, and the House and Senate tax-writing committees would use to implement any recommended changes to the tax code or entitlement programs or both.

If they come to an agreement, then you won't have to read any more stories about crisis governance until about January 2015 at the earliest. The challenge, as always, is that even median Republicans still categorically oppose increasing taxes even modestly. The establishment and the radicals have been at war with each other for weeks now, but they never battled over this single uniting principle.

“Crucially, I’m also confident that we’ll be able to announce that we’re protecting the government spending reductions that both parties agreed to under the Budget Control Act, and that the President signed into law. That’s been a top priority for me and my Republican colleagues throughout this debate. And it’s been worth the effort. Some have suggested that we break that promise as part of this agreement. They’ve said Washington needs to spend more, that we need to raise taxes — that we can just tax our way to prosperity and balance."

If the budget committee deadlocks, this will be the reason. Outside the narrow constraints of budgeting, there are plenty of things Democrats want other than tax increases. But it's hard to imagine them surfacing in an official budget conference as a replacement for new revenues.

Thus, there's a high likelihood that these negotiations will end the same way as all the others that preceded them did: no agreement. An agreement is only compatible with the GOP's anti-tax absolutism if Democrats drop their demand for tax parity and agree to pay down sequestration with other spending cuts. Possible, but unlikely. And gridlock would create a new challenge for Boehner and test whether the hardliners learned anything at all from this whole experience.

The deal extends funding for the government through Jan. 15. Republicans are now very, very invested in not triggering another government shutdown. Much more invested than they were last month, when party leaders got forced into shutting down the government against their better collective judgment.

Democrats won't shut down the government. They're not going to make demands unrelated to the issue at hand, like Republicans just did, and refuse to fund the government unless they get their ransom. But they will fight harder than ever to ease sequestration, and their leverage will come both from the deadline and the House GOP's inability to govern itself. This is where the dynamic between Boehner and his hardliners will become relevant again. The only way for him to beat back Democratic demands without shutting down the government will be to pass appropriations in some form that neither exceed sequestration nor include the kinds of extraneous riders that will invite easy veto threats from Obama.

This will be an immense challenge. Hardliners aren't particularly interested in funding the government without demanding ransoms, and even if they were, it might not be possible at the funding levels the party supports. Earlier this year they had to yank the one domestic appropriations bill they'd hoped to pass on the floor, because it was too austere for Democrats and moderate Republicans, and not radical enough for the hardliners.

They're not going to get a lot of help from Democrats if they try to appropriate at 2014 sequestration levels. And if they can't appropriate on their own, without once again dragging Obamacare into the equation, they'll have a problem.

Perhaps that just means the government will be funded with continuing resolutions in perpetuity. Agency budgets will remain stuck in the past, and subject to more damaging sequestration cuts. It does seem like McConnell would prefer this outcome over a real budget with higher spending. But if Senate Democrats can appropriate at higher levels, perhaps with assistance from chastened moderate Republicans, Boehner will get jammed again. Would he really shut down the government again rather than put a bipartisan omnibus spending bill on the floor?

Once that deadline passes, the debt limit will have to be increased again. The statutory deadline is Feb. 7, but extraordinary measures could delay that by several weeks. How it gets increased depends a lot on everything that comes before it. If the parties agree on a budget, it will probably be increased as part of it. If they don't, it'll have to be increased independently. And at that point Republicans will get to decide whether they want to try their hand at extortion one more time.