Keep the Replacements out of the Rock Hall

Or don't. It's fine. They probably won't care either way! 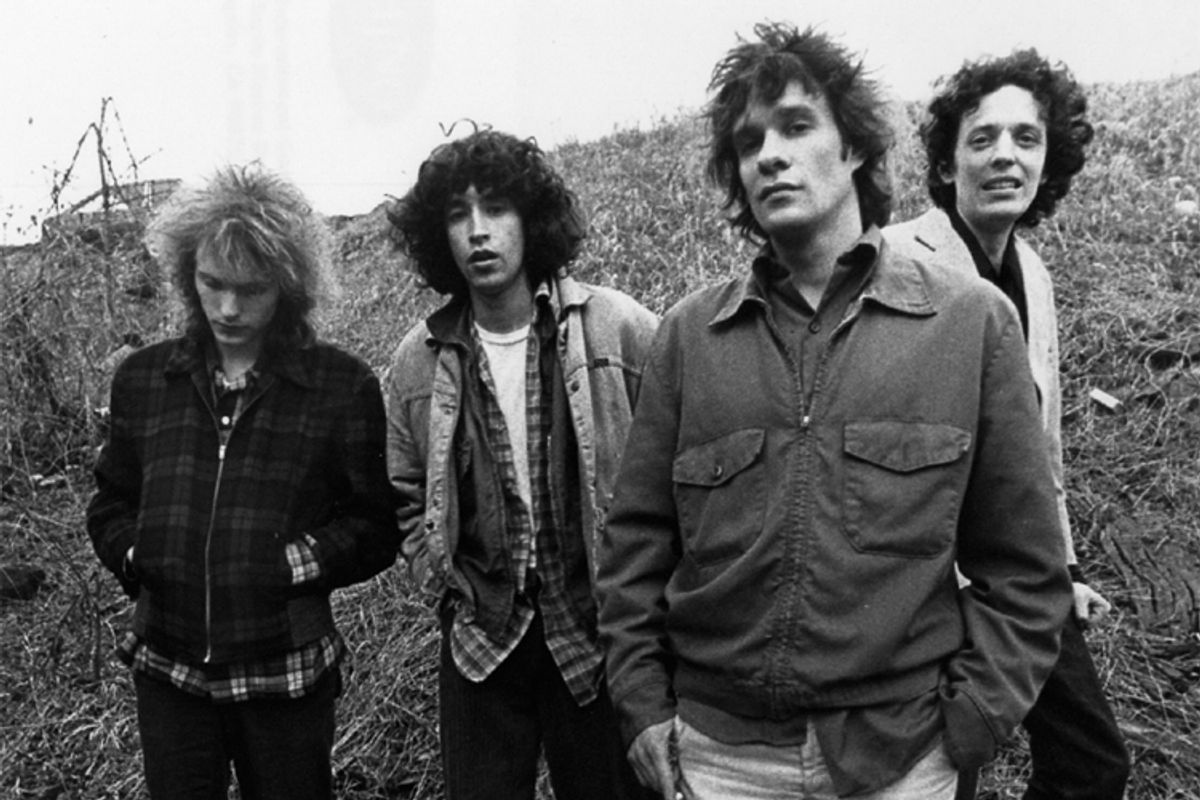 I didn't vote for my favorite band to be in the Rock and Roll Hall of Fame. Hear me out. This isn't a #Slatepitch or a self-aggrandizing cry of symbolic punk rebellion. (Well, it is not strictly those things.) It is an acknowledgment that some things aren't for everyone.

The nominees for induction into the Rock and Roll Hall of Fame are a slightly odd assortment this year, ranging from N.W.A. to Yes. For the second year in a row, fans have a vote along with the "insiders" who make up the Hall's selection committee. You can vote at RollingStone.com. The fan vote is what allowed Rush to make it through last year, after years of their being denied by the sort of people who still give new Who records four-star reviews. The fan vote is likely the only way a cult band like the Replacements are ever going to make it in.

The Replacements, as it happens, are my favorite band. They have been since I was a kid (the result of growing up in Minneapolis with hip parents). Their music defines my home for me, as much as Wellstone! stickers on rusted sedans, and butter sculptures and the Guthrie's annual Christmas Carol. Their music, as a whole, is a sort of extended, glorious tribute to a particularly upper-Midwestern variety of failure. They were one of the biggest critical darlings of the 1980s, and when the acclaim failed to translate into anything resembling mainstream success, they just sort of stopped. Before that, they released one of the defining albums of American alternative rock, and put out a couple of songs that could be described as "generation-defining" for the more disillusioned souls of the 1980s. They also got drunk a lot and played funny covers. There is no doubt, to me, that they're among the greatest American bands ever. But they're not Rock and Roll Hall of Fame material.

We shall consider factors such as an artist's musical influence on other artists, length and depth of career and the body of work, innovation and superiority in style and technique, but musical excellence shall be the essential qualification of induction.

I mean I'd call this musical excellence, but, speaking as objectively as one can about an entirely subjective process, I'm not sure the 'Mats qualify. They likely sold fewer records than every other nominee, had fewer (as in zero) major hit singles, and were, honestly, quickly eclipsed in terms of influence over the genre by bigger bands like the Pixies and, yes, Nirvana. (Fun story: Westerberg met Cobain once, in a hotel elevator. They didn't say a word to each other.)

But they were influential, and their audience has likely only grown, along with their legend, since they called it quits. It's very appropriate that the Rock and Roll Hall of Fame would finally acknowledge their existence now, after a three-city big festival reunion tour. Now they're officially a true Rock and Roll band, because they reformed without some original members and took a nostalgia act on the road! (As nostalgia acts go, though, it was a wonderful, fun and ultimately heartening one, as I wrote in a piece for Maura Magazine.)

Considering this list of nominees, there are a ton who would be more appropriate. Of course Nirvana deserves to be there. They were a radio-friendly hard-rock band with a couple of monster hits and several multi-platinum-selling albums. They defined a genre and popular bands still sound like them. The Zombies have three songs that, when used in a movie trailer, immediately allow the audience to identify the film as taking place in the late-1960s, so, yes, another no-brainer. I don't even know how or why Linda Ronstadt isn't already in the hall when Jackson Browne's been there since 2004.

And if the Rock and Roll Hall of Fame rewards artists for achievement in the field of Rock and Roll, you can't argue with Kiss. You can very easily argue with an '80s college rock band that had one Top 100 single ever. A band that wrote an anthem about the side of the radio dial where you used to find the stations that played bands that couldn't get played on popular rock radio seems an unlikely candidate for a museum dedicated to popular rock.

So I voted for Kiss, the Zombies, N.W.A., Chic and Hall & Oates. They all either "fit" in the Hall, as it is currently organized and as its founders intended it to be, or they are the sort of groups that fat rich old '60s relics should be embarrassed into acknowledging as integral parts of the genre they use to define their worldview and generation. Like Kiss, a band that was designed around selling merchandise and producing a manufactured simulacra of "rocking" that was nearly indistinguishable from the real thing. And Hall & Oates, who have always been too "soft" for the Hall, according to the macho definition of "rock 'n' roll" that it celebrates. (It is an interesting data point that Hall & Oates, likely the least "hip" group in this group of nominees, has probably been sampled by hip-hop artists far more often than the rest of the all-white groups combined.)

And I think those artists, mostly, would be happy for the recognition. It would mean something to them. The Replacements, though? They don't need it. I don't think the surviving members really care if they get it. Paul Westerberg seems to have pretty explicitly quit the mainstream success game more than a decade ago, and he seems pretty happy making weirdo music in his basement and coaching his kid's baseball team. Tommy Stinson is a world-touring rock star and Chris Mars is making art.

Honestly, no one born after 1950 should care about getting into the Rock and Roll Hall of Fame. It's a museum to a dead genre -- not rock, but "Rock and Roll" as defined by the sort of people who find the lyrics to "American Pie" really meaningful. It's always had toxic racial politics, recognizing white artists who co-opted black music (often without credit or recompense) before it recognized the artists who originally created the music. (No one should want to be associated with an institution that inducted Eric Clapton three separate times before it got to Buddy Guy.) It's easy to see homophobia (and sexism) in its longtime allergy to pop and disco and dance music, and other music not strictly crafted for straight teenage boys and young men (and then, inevitably, old men). It's even easier to see curdled and outdated '60s-'70s notions of rock authenticity in its long snubbing of prog and metal (this is usually attributed to crank critic Dave Marsh, the Hall committee member considered second only to Jann Wenner in terms of influence). The museum exults mediocrities like the Doors and thieves like Led Zeppelin. It's a perfect monument for an industry defined by suits getting rich off the work and creativity of artists, and for a generation that still thinks its style of dress and choice of loud music was a revolutionary act.

The Paul Butterfield Blues Band is a great example of the Rock and Roll Hall of Fame's essential ridiculousness. Decent band -- Mike Bloomfield was a great guitarist -- but outside of a very brief association with Bob Dylan they were just a modestly successful group of (mostly) white guys adapting ("adapting") black music, who happened to be lucky enough to have done so during The Only Decade That Mattered. Their nomination is a clear signal that the hall has depleted its strategic 1960s reserves. They should probably make like the Baseball Hall of Fame and just stop inducting people, because they've run out of dead legends with inflated myths.

Really, they've been treading water since U2. Maybe the Hall ought to just have a party this year for Nirvana, wait five or six years for Oasis (and Radiohead if they're feeling "adventurous"), then call it a genre and close up shop. After that Wenner and his cranky band of canon-definers will be looking at list after list of utterly unfamous indie darlings, pop-emo bands old boomers despise, and the post-grunge sludge-music that grew out of "alternative." (Your Hall of Fame Class of 2020: Pavement, Jimmy Eat World, and Incubus!) They won't be happy. Those bands' and artists' fan bases won't care about the "recognition." It won't be fun for anyone anymore.

The Rock and Roll Hall of Fame is a very silly place run by very silly people. So, no, I don't care if the Replacements don't make it, and I also don't care if they do. The Hall wants to be what it is -- the world's largest and most lavish tribute to Eric Clapton -- and that's fine. Let the old men have their monument to how much cooler stuff was back then. As long as they're tending to their Hendrix memorabilia they're not fucking up the rest of the country.  Let an aging generation protect their self-congratulatory hall of nostalgia from the terrifying representatives of a culture that moved on. If we want to, we can build our own ridiculous museum for the Replacements, and the Pixies and Pere Ubu and Sonic Youth. And then we can build one for Justin Bieber and Dr. Luke and all the other artists that make the people who like those bands mad.

I will say, though, that on the exceedingly unlikely chance that they ever get nominated, I will vote for my other favorite band, the Mekons: