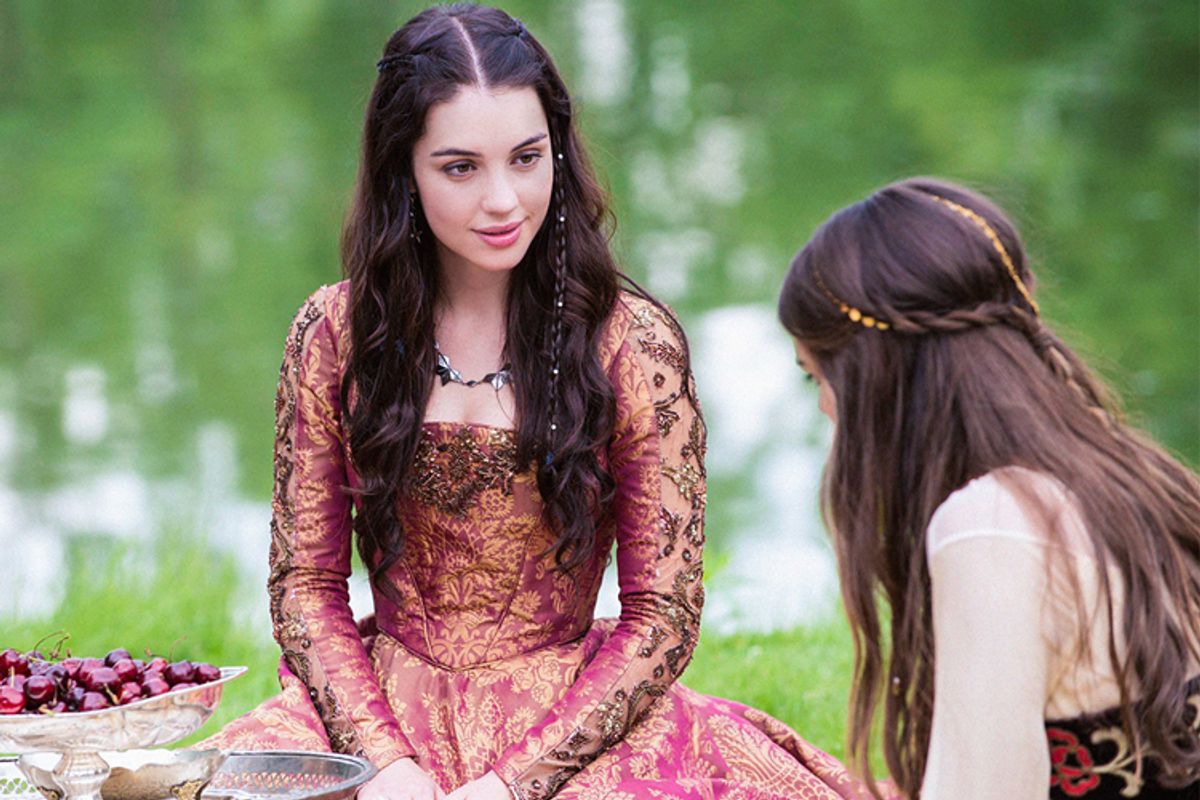 Early into the series premiere of the CW's "Reign" we are given a few factoids: This is France, 1557. Mary Queen of Scots has been secluded away in a convent since she was 9 years old, safely awaiting her marriage to the future king. But the pilot moves too briskly, its tone too lusty and fanciful, to be any sort of serviceable history lesson. After a brief but gruesome assassination attempt warns Mary that her life is in danger even here, the young queen is whisked away back to court to await her impending marriage to Francis under the watchful gaze of his overprotective mother, Queen Catherine, and her surly King Henry.

Prior to her departure, farewells are exchanged, the beginnings of intrigue are illuminated, and Mary's destiny is elaborated upon. A freckled child who has no cause to know anything of life outside roughly a mile radius instructs Mary to be wary of ghosts within the castle walls. These forebodings, as well as an early appearance by none other than Nostradamus, hip us to the fact that -- while there may not be vampires -- there will be blood, treachery, teary romance and all that we have come to expect from CW fare. The beautiful Adelaide Kane ("The Purge") resembles Anne Hathaway with broader features. Her Mary Stuart holds no emotion back, receiving all this information with quivering lips, furrowed brow and heavily lidded eyes.

A fast-paced introduction to royal court, accompanied by only vaguely appropriate music, recalls the giddy energy of Kenneth Branagh's 1993 "Much Ado About Nothing" adaptation, but without the sheer madness of Keanu Reeves or the timeless suavity of Denzel Washington. We quickly meet a vast array of characters. Francis is dashing, if a bit anxious. His half-brother Sebastian is far more self-possessed. King Henry is gruff, philandering and, in our day, what might be termed a misogynist. In 16th century France, it's called being king. His relationship with his queen is openly contentious, what with Catherine considering herself the money, if not the power, behind the throne. Also, her loyalty to her son Francis over her husband is resolute.

Not surprisingly, King Henry is partial to Sebastian, his bastard son with Diane de Poitiers, his mistress whom the king boldly trots out in front of all of court. I'd like to say all of this exposition is cleverly doled out through action and circumstance during the course of the episode. Unfortunately, most of it is issued during a single sequence by Mary's Scottish ladies in waiting, a gaggle of four mostly indistinguishable from each other except that one of them used to spend her summers in Narnia. These five ambiguously young women are unabashedly teenage. From their first giggly moment together, Mary, Greer, Kenna, Lola, and Aylee reset the tone of the program. They put on makeup, don frilly dresses, fawn over boys, dance like schoolgirls and indulge varying levels of sexual experience.

What thankfully saves "Reign" from being mired in the realm of inconsequential teenage angst is the fact that the stakes are way higher than a broken heart, the consequences more unsettling. For example, acting on a prophecy from Nostradamus, Catherine turns against her young daughter-in-law-to-be and conspires to have her virtue eradicated. This isn't "Game of Thrones," so the depiction of the potential deflowering is decidedly tame, but the ramifications resonate. In this world, all it takes is will or desire to reduce a woman to no more than property. (While the sex is not explicit, the culprit's punishment is.)

The real Francis II was 15 when he ascended to the throne of France, two years younger than his bride. He was reportedly sickly and frail, hardly the energetic, studly prince being played by Toby Regbo. His half-brother Sebastian, one third of "Reign's" emerging love triangle, actually never existed. (Diane De Poitiers only had daughters.) A disfigured girl with a sack over her head haunts the castle and Nostradamus is handy with poisons. Historical accuracy is not the purview or the focus of this show. While the details may be fudged, however, "Reign" shows positive signs of at least adhering to the ideology and incentives of the time, no matter how unfamiliar or disturbing they may be to its modern-day audience.

At one point, Mary gets a little presumptuous and familiar with her future husband. He tells her point blank, "Kings do not answer to their wives" and she is left to deal with that fact. "Reign" is a show targeted at young women. Mary is undoubtedly intended to be a strong heroine at a time when that was unacceptable. It's one thing to watch a young girl rushing to grow up. But it's even more engaging to see her struggle with her Age.