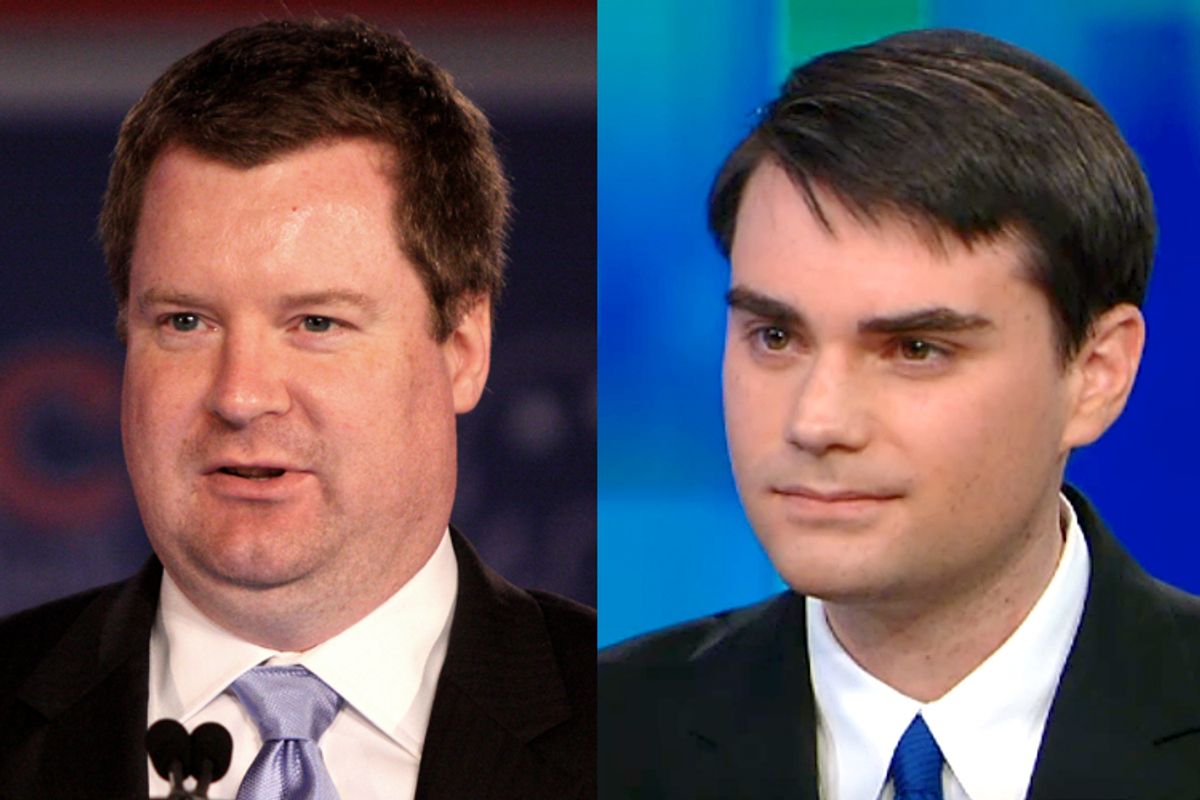 Now that the budget battle of 2013 is complete, the right-wing media is taking the next logical step: assigning blame.

As he usually does, RedState.com's Erick Erickson is leading the charge with a post that serves as a call-to-arms (while also sounding, ironically, like some long-lost Bolshevik pamphlet), titled "Advancing. Ever Advancing." While many Republicans have come to question the strategy of shutting down the government in order to force the defunding of Obamacare, Erickson believes the blame for the GOP's defeat belongs solely to the party's leaders in Congress. He's especially scathing when it comes to Senate leadership, writing:

Men like Mitch McConnell, John Cornyn, Eric Cantor, Kevin McCarthy, and others have preached a great sermon against Obamacare, but now conservatives who supported them see that these men have refused to actually practice what they’ve been preaching. They’ve refused to stand and fight with the rest of us.

Erickson finds the silver lining, though, noting that the fight has exposed the weak-kneed "frauds" in the Republican ranks and given conservatives a clear indication of who deserves to be replaced by an even more right-wing primary opponent:

The establishment has given conservatives a brilliant opportunity to advance against them and then against the Democrats. As Obamacare now goes into full swing, conservatives can show that they tried to stop it while Mitch McConnell and so many others sat and watched from a cozy booth the Capitol Hill Club leaving the fighting to others while they did everything possible to undermine the fight.

As more Americans watch Obamacare fail them through the Republican primary season, conservatives will be able to put the focus on Republicans who funded Obamacare instead of fighting it. Whether they like it or not, Republicans in Congress will find their names on ballots in 2014. They cannot hide or escape fate.

In his belief that Republicans would have won if only they'd stuck together, Erickson is not alone. Ben Shapiro of Breitbart also sees GOPers who didn't fall in line as the problem. In a post that alleges Ted Cruz's strategy was "undercut" by some of his fellow Republicans, Shapiro shares a rather tortured, "Godfather"-inspired metaphor for how the Republicans lost:

The question was not whether those opposed to Cruz’s strategy were in favor of Obamacare – Republicans are still united around opposition to Obamacare. The question is whether once that strategy was engaged, undercutting it by signaling repeatedly that Republicans would not carry the fight through sank any chance of real concessions from President Obama and Democrats. Washington Post columnist Kathleen Parker suggested in a recent column that Tea Partiers were “shoot-now-take-names-later” Sonny Corleone types, and that the establishment legislators were “cooler-headed son and intellectual strategist” Michael Corleone. The better Godfather analogy is the reverse: Cruz and company were, for better or worse, the architects of a strategy already in play, the Don Corleones of this particularly scenario; establishment Republicans were along for the ride. But, like Sonny in front of Virgil Sollozzo, establishment Republicans spoke out of turn. And that allowed the Democrats – Sollozzo – the opportunity to take out the leader and hope to deal with those left intact. That strategy bore fruit.

But not every member of the right has turned inward. Neil Munro, the Daily Caller reporter who once made headlines for interrupting the president, responded to the Republicans' loss by penning a remarkably petulant report, titled, "Obama: My partisan vitriol shows value of bipartisan harmony." In the piece, Munro claims the president repeatedly used incendiary rhetoric, while Republicans opted instead for "moderate" language. Munro blames the "established media" for failing to report the supposed contrast: