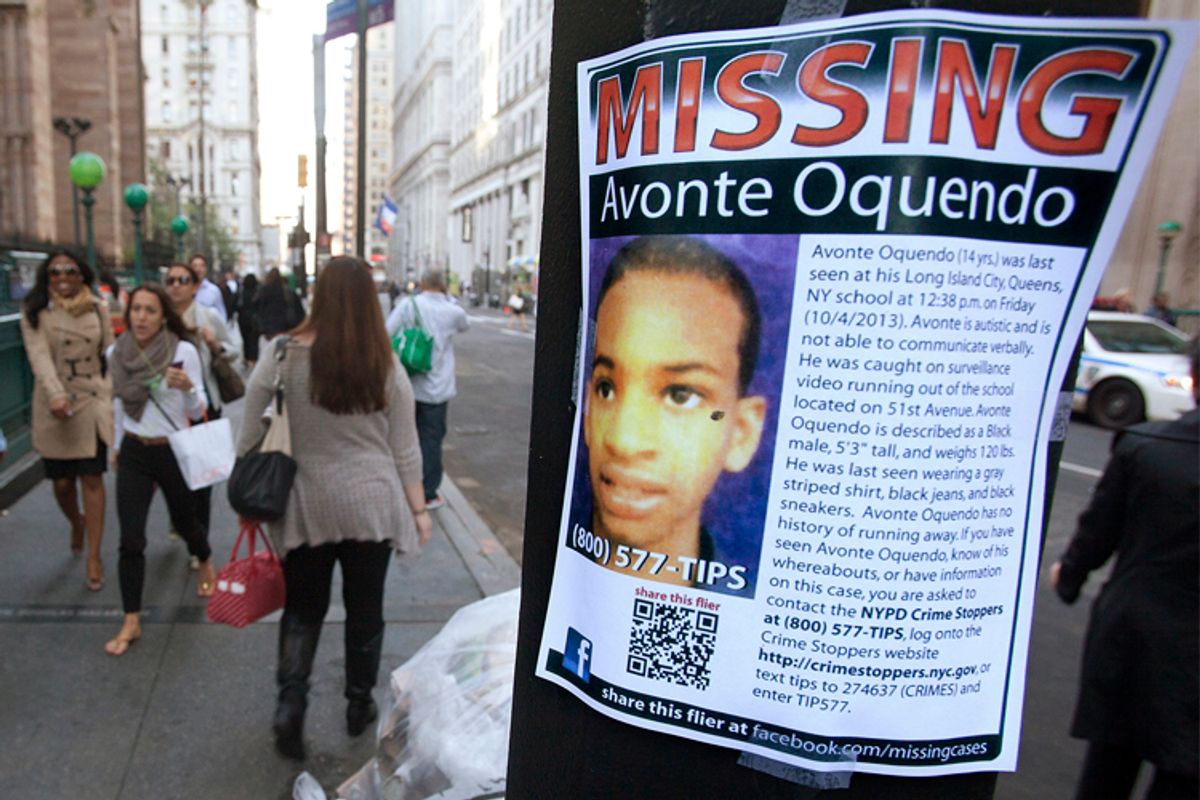 In the last 12 days, how many times have you asked yourself and others the following question: where is Avonte Oquendo? If you're a New Yorker, you've likely wondered more than once, as posters seeking help in locating the 14-year-old autistic boy -- missing since October 4 -- have been placed throughout the city. If you're a black New Yorker, you've probably inquired -- far more than once -- not only about Oquendo's whereabouts but why more of the national public isn't aware of who he is. But here's a query we may all be overlooking: if you saw a black teen boy wandering a city, how closely would you pay attention to him? And if you truly noticed him at all, would it only be because he raised your suspicion?

Wandering is a common, high-risk occurrence for children with autism. According to Autism Speaks, which is currently offering a $70,000 reward for Avonte's safe return, nearly half of diagnosed children over age 4 are prone to breaking away from family, school, or friends and disappearing. Fifty three percent of these wandering children were missing long enough to cause their loved ones to worry. What happens after that is often left up to the perceptions of passersby and announcements like the ones the NYPD and others have posted around the city to find Avonte Oquendo. If a commuter were to encounter a wandering adolescent, would she pay enough attention to connect him to the face plastered on lampposts and subway platforms? Would she notice that the boy is disabled, worried or lost? It's difficult to know in any case, but when the wandering teen is black, racial bias makes these questions doubly fraught.

We can't ignore the ways in which racial suspicion colors our assessment of people and their circumstances. On the heels of the Jonathan Ferrell case, where negative perception of an injured, disoriented, unarmed black male doomed him to death, we are reminded that first impressions are life and death matters when black young men are involved. Whereas Ferrell was never given the opportunity to identify himself and explain his needs, Oquendo would not be able to. His autism renders him unable to verbally communicate.

Not only are black disabled missing children at the mercy of placards and passersby, but their cases are often underreported in mainstream media. Racial disparity in missing persons news reporting is no secret. A 2010 study indicates that, though missing black children account for 33 percent of all cases, only 19.5 percent of missing-child reports on the news involve black children. These omissions have prompted the creation of organizations like Black & Missing Foundation and the TV One cable series, Find Our Missing.

With the advent of social media, families have been able to compensate for this dearth of coverage, generating more national awareness online and organizing search parties independently. In Oquendo's case, a Bring Avonte Home Facebook page has been created, though the number of subscribers remains under 7,000. Twitter has also been helpful, both in raising the profile of the case and in pointing out potential racial stereotyping. A  few Twitter users noticed a flyer with Oquendo's picture and vitals displays the word "Wanted" above the word "missing" and in a larger font, and pointed out the potential bias in that framing. Oquendo's autism and inability to communicate verbally are buried in the lower half of the flyer.

When a missing child has a cognitive impairment, it's especially important that he or she is approached gently and with patience. MissingKids.com and Autism Speaks have great instructive steps for anyone who may encounter Avonte or a missing child like him. These include: calling law enforcement; comforting but avoiding touching the child; maintaining a relaxed and calm demeanor; using simple phrases; and waiting with the child until help arrives. What isn't mentioned on these lists is that race should never stop someone from helping a missing child. Unfortunately, it may be the very thing that keeps black children, especially the 1 in 98 who are autistic like Avonte, from being swiftly found.