The actress swore she wouldn't get married until gay people could. A lot can't. She's married. Surprise! 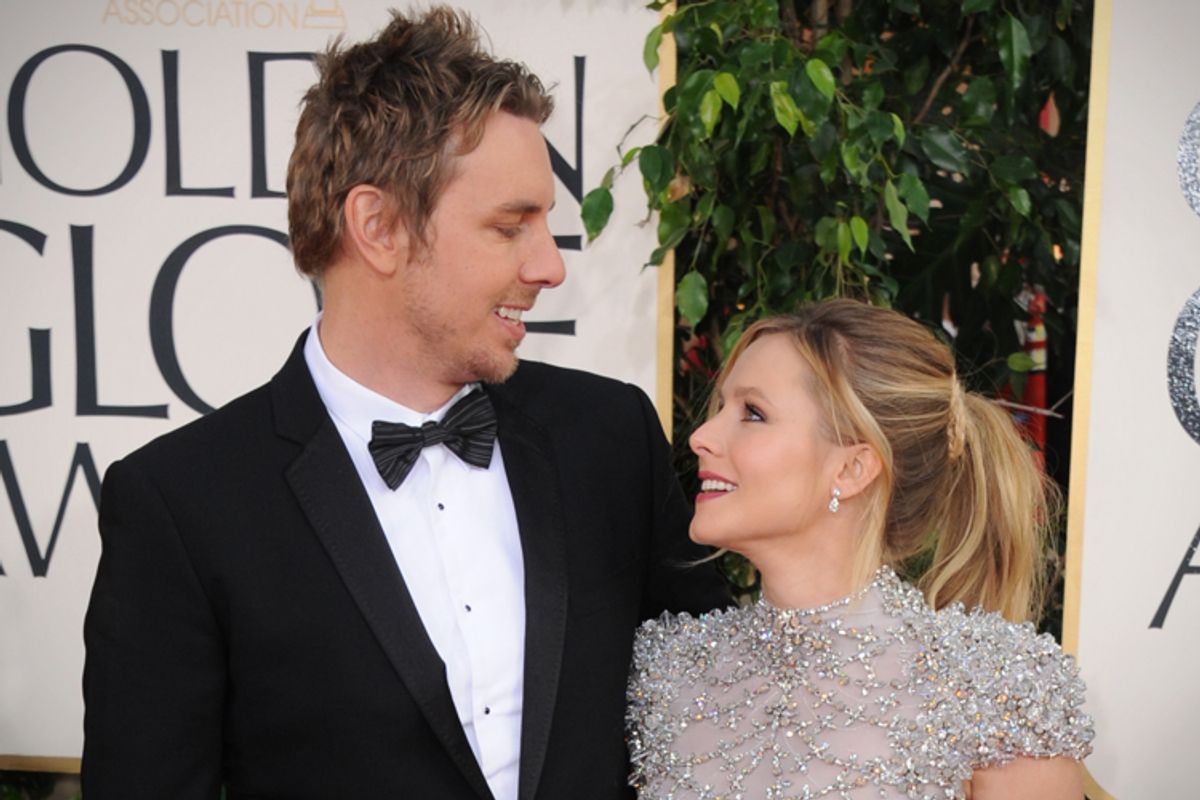 Good news, gay folks across America! You can get married, no matter where you live. Just ask former "Veronica Mars" actress Kristen Bell.

Bell, known as the narrator of "Gossip Girl" and for films like "Couples Retreat," had said on many occasions that she would not marry until her gay friends could, as well: "Once it's official and everybody stops appealing it the minute before it passes, we'll get married," Bell said in a 2012 interview with Larry King. "We're not going to have a party when half of our friends ... can't do that thing we're doing. We're not going to ask them to come celebrate a right they don't have. That's just tacky!" Bell's then-fiancé Dax Shepard told CNN in an interview pegged to a film in which the pair co-starred. On occasion of the overturning of the Defense of Marriage Act and California's Proposition 8 this summer, Bell, already engaged, "proposed" to Shepard on Twitter; Shepard tweeted about the pair's coupling as a "big, gay marriage [sic]." Anyway, they just got married in a small private ceremony.

The common denominator, up until the pair actually married, is publicity. Leaving entirely aside how offensive a heterosexual couple describing their easily obtained marriage as "gay marriage" is, Bell had managed to keep herself at the center of the gay-marriage conversation while the Supreme Court case was being adjudicated -- now that it's no longer the most-discussed political issue of the day, she was able to do what she wanted with her personal life, even as gay marriage fights continue in states across the nation.

Bell can and should do whatever she wants in her relationship with Shepard; that's between them. But her insistence on framing a political issue around how it affected her, a heterosexual upper-class woman, and dropping it with a final, tweeted plea for attention, as soon as her circle of friends in one state in the union got the right to marriage, only served to muddy the waters around gay rights. Good for Bell's friends in California that, with the overturn of Proposition 8, they can get married! How strange that Bell chose an incremental moment on a long fight toward equality as the moment to declare that as far as she was concerned, she could get married now. Kristen Bell's marriage equality crusade was over -- sorry, New Jersey! (To say nothing of Alabama.) As conclusive as the Supreme Court's ruling was in some ways and for some people, including Bell's friends, many still cannot get married and will not be able to for years; the fight continues. It's as though Bell swore she wouldn't have a child until the debt ceiling crises were conclusively over, then announced this week that she was going to get pregnant. How nice she can do what she wants, but the news event isn't over just because she stopped paying attention.

Bell and Shepard's public statements rhymed with ones undertaken years prior by Brad Pitt and Angelina Jolie; rather like "30 Rock's" desperately striving actress Jenna Maroney styling herself like Hayden Panettiere, the appearance of Bell and Shepard aping superstars was unavoidable. Pitt and Jolie look like socially conscious, thoughtful people for their not marrying until gay marriage is the law of the land -- not least because, tabloid reporting aside, they haven't actually wed yet. Also, Pitt's language around his personal decision frames it around expansive rights for all, not just the desire for his friends to be able to have a party. In 2009, he said: "I believe everyone should have the same rights. They say gay marriage ruins families and hurts kids. Well, I’ve had the privilege of seeing my gay friends being parents and watching their kids grow up in a loving environment." He's noting a personal connection to the issue -- but imagining a world outside his circle.

The now-married Shepard-Bells have used gay marriage to boost their name recognition and to optimize news events of huge import as personal P.R. triumphs. Given that they've let the public into their thought process, it doesn't seem like too much to ask that they imagine a world in which there are people outside themselves and their friends. But it's hard to get Us Weekly coverage with nuance.