Not all millennials are white and privileged!

A lot of us are fighting for an education, battling inequality and marching for justice. Quit calling us lazy! 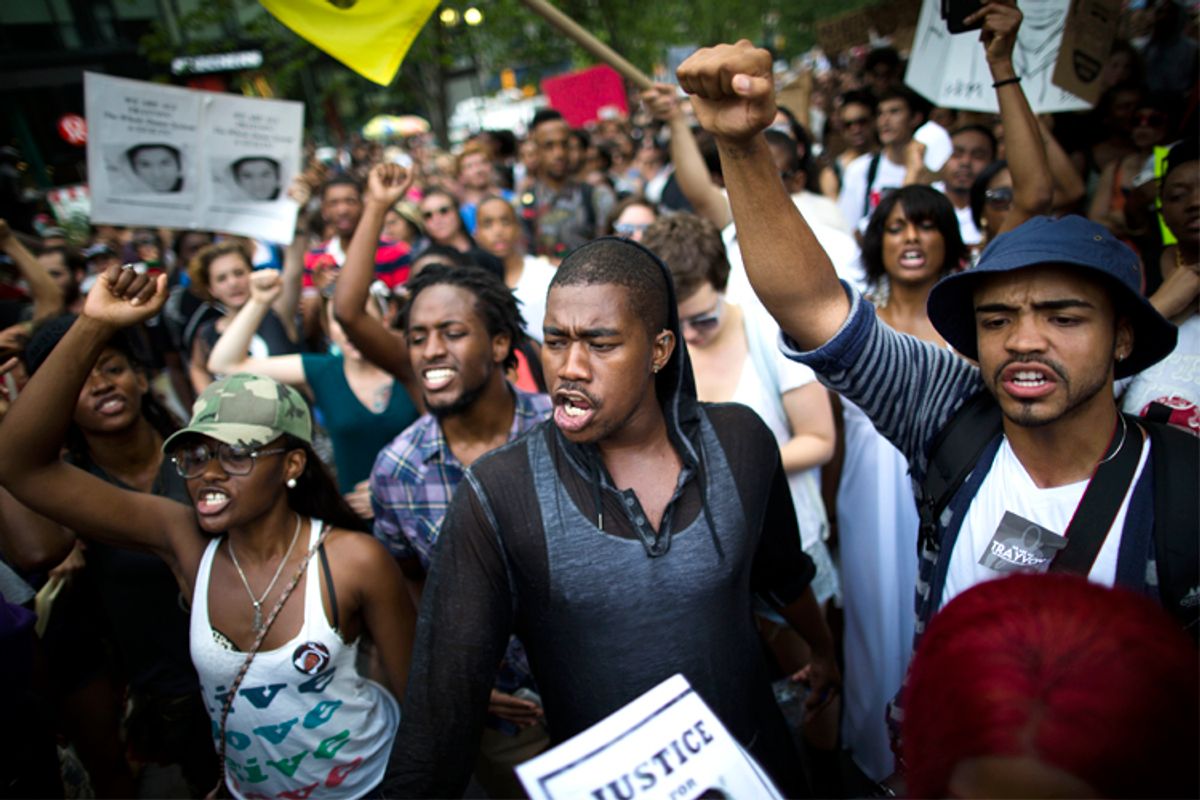 I have a timer set on my phone. It counts how often I hear the words "millennial" or "Generation Y'er" with some sweeping crass generalization about how awful people my age are. It is coupled of course with photos, of some Instagram-lit, tattooed, white manic-pixie dream girl and her alt-rock flannel boyfriend. The chances of the poster children looking like me (fat, and unambiguously black) hover between not-in-the-slightest and Christmas miracle. Rhetoric that comes anywhere close to talking about my life is even less common.

It’s easy to to make fun of the entitled, selfie-taking stereotype. In reality those of us born between 1980 and 2009 are a diverse group, who have had extraordinarily different experiences growing up. The lack of engagement with race, class, regional, political and immigration issues in journalism about millennials does us all a disservice by dodging the serious questions of what our coming of age means for the future of America.

Our generation has been a media focus for years. The Chronicle of Higher Education’s 2009 article  “Millennium Muddle”  highlights the problem  beautifully, if unintentionally. In an entire article about this burgeoning analytic framework, only one of the academics, Fred A. Bonner II, challenges the assumption that all millennials are coddled and indulged.

But as a first-generation everything and a black millennial, I respond to the laser focus on the indulged and underperforming with a special fury. As blogger Trudy of Gradient Lair points out, education and hard work have always been hailed as the panacea for all our ills. Even more infuriating is that as recently as 2002, in the book "Microtrends," Mark Penn pointed out that a large percentage of black teens (I was 18 that year) were hard-working, high-achieving volunteers. He also cited the 40% home ownership rate as one of the fundaments of the rise of black wealth. Post-housing crisis, with its racially targeted loans that torpedoed our economy, how much of that was wiped out and has yet to be recovered? With half (or less) of the support white middle-class young people got, we rose to the challenge and got hosed anyway.

Today the millennial is a variant of the idea of the indulged hipster. The kids of "Girls," of Williamsburg, underacheivers and snotty art kids living indulged shiftless lives; the comedy of artisan this, microbrewed that and bad service blah blah. Schooled and reared in Brooklyn and Queens, I now find the places where I grew up and went to school priced far beyond my means and those of the communities that sustained me. When Brooklyn experiences a “ renaissance,” the Hassidic, Latino and West Indian communities that made it get moved out. And their kids -- yes, also millennials -- can’t afford to live there.

All of this, and still we are seen as complacent go-along-to-get-along layabouts. Our education, housing, healthcare and sexual autonomy are all in jeopardy and the constant refrain is, “Well, do something.” Yes, Occupy happened. But I want to ask anyone who thinks millennials are lazy: Why aren’t people like the Dream campaigners part of the moment? Why aren’t the marches for Trayvon Martin and The Dream Defenders part of it? Millennials have met these challenges with protests , marches, and yes, cross-generational organizing. We're fighting redistricting, police violence and voting rights challenges that hinder the very moment we’re supposed to seize. “Dirty hippies” and disadvantaged citizens, however, aren’t the best and brightest, so their struggles to secure the dream we were promised and the rights we were guaranteed don’t play as well in London or New York.

And while we're supposedly being indulged at every turn, just getting an education has been a constant battle. I'm an early millennial, born in 1984, and when I started my education, I was able to attend a classroom that had gifted and special-ed programming in my neighborhood with an average class size of 20. Current millennials in Chicago, Detroit and Philadelphia are having sit-ins and organizing unions, as their schools are closed with class sizes of 29 called too small. When children are left crying at the end of the year because their schools won't reopen, what part of that experience tells them they are coddled and special? What does it say about America when its major urban centers would rather build stadiums than educate their future voters? What more does it say that it would rather point and laugh at the kids with stable high school educations and college possibilities who point cameras at their faces than talk about the ones who are trying desperately to graduate from schools that are more concerned with test scores than educating kids?

If you managed that hurdle and got to college, crushing debt is your new friend. Part of my educational journey was an elite feeder program into the independent schools of New York City and into an Ivy League university. As a first generation American from a working-class background, and first in my family to graduate from college, helicopter parents would have been useful. I’m at the low end of the college debt spectrum with just over $30,000. Thankfully my college eliminated loans... one year after I graduated. And that’s me as a documented individual. Dreamers? Had to march and protest for citizenship rights, without which they were denied benefits like in-state tuition and jobs. An engineering masters but fixing roofs? Yeah, that's coddled.

Once we get out, we are in an intern economy, where the price of entry is having a background that can support you while you get no pay for your work (and, incidentally, no sexual assault protection). Sarah Kenzidor has pointed out brilliantly the price of this economy in an ongoing series for Al Jazeera. Add the continual cases of employment discrimination, the insularity of job acquisition and the casual racism of applications, and focusing on those exasperated by having to work rather than those who desperately want to work and can’t starts to seem more criminal than informative.

The real story of millennials should be an examination of the startling inequalities both between and within generations. The millennial model doesn’t even fit white able-bodied people, who are working and struggling to make less than ever before. It instead becomes a brilliant example of a collective neglect of the chasm of race and class. A diverse generation, with multiple influences and experiences, is coping with a government that would shut down rather than give us the healthcare options it passed into law, and a job market where opportunities are auctioned off to the highest bidder. The story of how we got here, which many of us are trying to tell, could change the world.

Every time that alarm goes off, I’m sure it’s not about me. I got the message and I’m not alone. The millennials that matter have had lives shaped by a focus on their every move, at the expense of real analysis of the issues that affect them. With that kind of unadulterated attention, even if it’s negative, why wouldn’t we adore “selfies?” We can make fun of the pictures, but in the end America's obsession with them says more about the country's blind spots than it says about us.