Republican leaders are learning smart lessons from the shutdown debacle. The problem: The right sees it differently 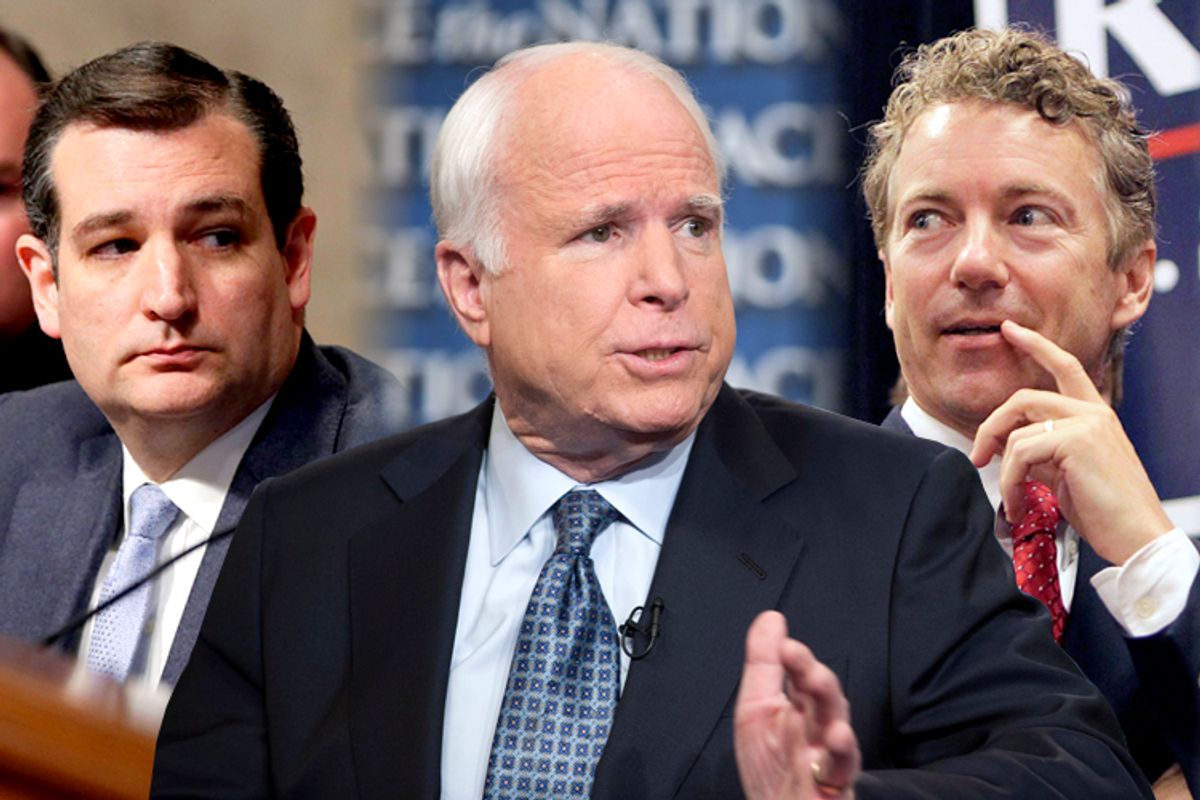 The right's reaction to the unbridled disaster of its government shutdown and threat to default on the debt is probably best encapsulated by two quotes from GOP lawmakers.

“I would do anything, and I will continue to do anything I can, to stop the train wreck that is Obamacare."

The truth is that Cruz will only have the power to run the same play if party leaders like McConnell cower and let him, like they just did. And McConnell more than anyone else in the top ranks of the GOP seems determined not to let that happen. It took the party 18 years to forget the first mule kick. It's unlikely to forget the second one in just three months. And McConnell has a greater incentive than anyone in the party to prevent it. An act of recklessness like this, undertaken by a whole party, damages statewide candidates more than cocooned House members. It harms the prospects of GOP Senate control more than it imperils the existing House majority. And to the extent that it forces McConnell to cut deals the right doesn't like it provides ammunition to his primary challenger as well.

You'll note that, unlike Karl Rove, McConnell has dropped any pretense that the shutdown was Obama's fault or Harry Reid's fault. His message is to the people over whom he has some control. This is on us. Don't do it again.

But McConnell can't single-handedly stop a shutdown. He needs House Republican leaders to either find the secret sauce that convinces conservatives to fall in line with party strategy, so they can pass non-crazy legislation on their own, or to cut the Tea Party loose and govern with Democrats.

And that's why the right's reaction to the shutdown is so important. This GOP civil war is much more tactical than it is substantive. For it to end, the factions need to come to terms on tactical matters. But in the immediate aftermath of the shutdown fight, the rebel faction in the GOP -- the faction that just walked the whole party into a wood chipper -- appears completely unchastened.

Like Napoleon blaming his troops for not being better suited to the cold, the defund caucus now says it's all the moderates' fault. Maybe the press too.

As the terms of GOP surrender were being finalized in the Senate on Wednesday, the conservatives who crafted and supported the strategy were over in the House, blaming their retreat on colleagues who warned them against it from the outset.

“It’s pretty hard when he has a circle of 20 people that step up every day and say, ‘Can we surrender today, Mr. Speaker? Can we just go away? Can we make it easy?’” added Rep. Tim Huelskamp, R-Kan. “I would say the surrender caucus is the whiner caucus, and all they do is whine about the battle, as if they thought being elected to Washington was going to be an easy job.”

It might all be harmless blame-casting if not for the fact that the movement architecture that empowers these members is fully bought into the premise. In a perverse way, McConnell and company might be better off if those groups turned more of their attention to primary fights because as long as they're advocating legislative tactics, they're making shutdowns and other conservative losses more likely.

The rift within the party is perfectly reflected, too, in the conservative media's completely schizophrenic reaction to the defeat. Tactical "I told you sos" from those who opposed the defund strategy, carping at RINOs from those who backed it, and a brave few trying to paper over the whole mess. The one common thread between them is an agreement that the conservatism itself couldn't possibly be the problem.

McConnell's postmortem is reminiscent of the Republican National Committee's look backward in the aftermath of 2012. The context was different, but the concepts similar. Let's not make the same mistakes again. It argued that the party should make immigration reform a priority and that conservatives should stop talking only to themselves. Those recommendations now seem so quaint.