No, the "system" didn't cause the shutdown -- it was extreme GOP nuts!

We've had divided government for years, and there are usually no calamities. The GOP has changed -- and it's broken 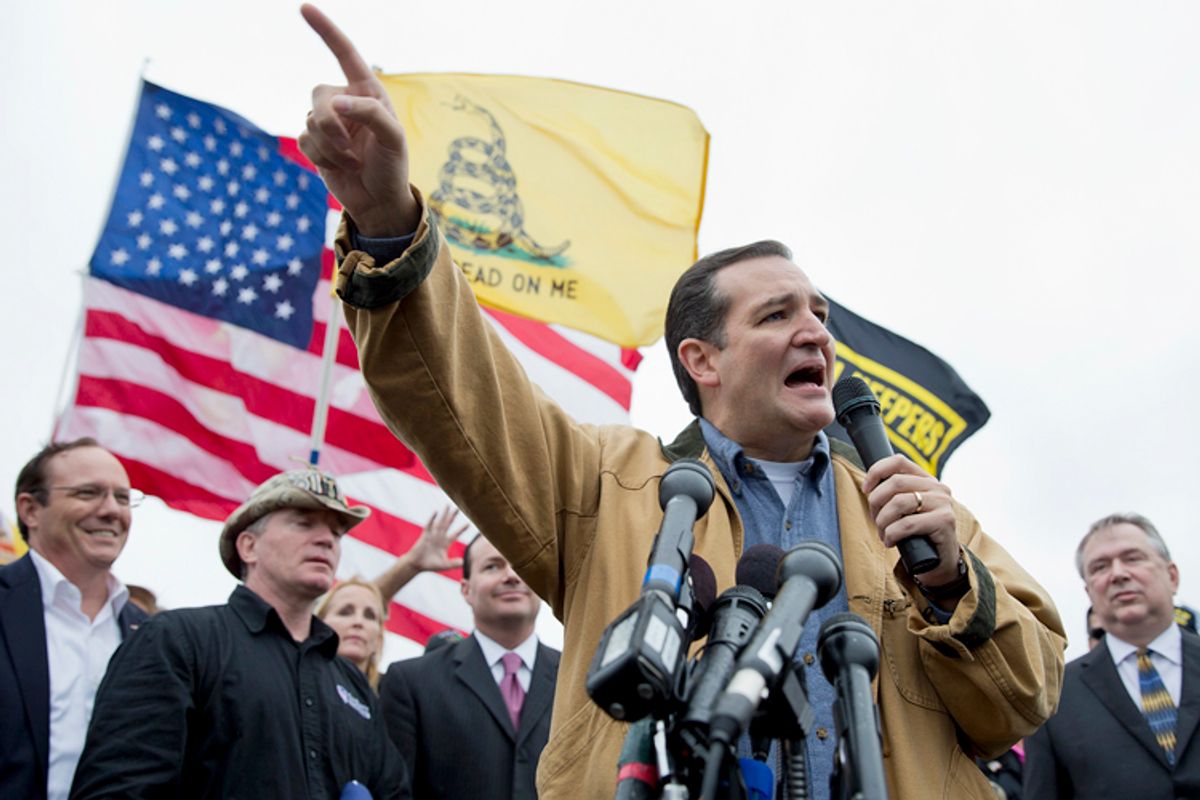 OK, everyone: Stop trying to figure out how to fix the system in order to prevent future government shutdowns. It’s not the system that’s the problem; it’s the broken Republican Party. If your reform isn’t about that, then good or bad, it’s just not relevant to the current situation.

Yes, I’m looking at you, Paul “get rid of the filibuster” Starr. And you, Ryan “bring back earmarks” Lizza. And a whole bunch of people who think the California top-two primary is the right ticket – Reid Wilson, Adam Nagourney, Amy Walters. Oh, and then there’s a whole bunch of people who just believe Madisonian institutions aren’t up to it. There’s more, both in those items and elsewhere. And some of the proposed reforms are great ideas (I like earmarks), even though some of them, such as changing primary election rules, not so much.

But the main thing is that none of these reforms, good or bad, have very much to do with the actual problem that caused the shutdown, which is a broken, dysfunctional Republican Party.

What about partisan polarization? No, that can’t be it, either. To be sure: Polarization in Congress is strong, and increasing. But it’s hard to see any important milestone that was only recently passed; the point at which every Republican was more conservative than every Democrat (with rare exceptions) was passed long ago. The 1995 debacle also works against the polarization theory, since that didn’t repeat until the last three years despite increased polarization all through the intervening years.

No, the problem is the Republican Party, which has developed a weird and dysfunctional set of incentives along with the legacy of a handful of role models they would be better off without. There’s the race to be the True Conservative, which requires staking out ever-more-crazy positions in order to differentiate from RINOs and squishes – and the reaction by mainstream conservatives who are terrified at losing their conservative credentials and therefore cling as close as possible to the nuttiest radicals out there. There’s the lucrative conservative marketplace, which thrives on incivility and conflict – that’s one set of perverse incentives – and which also thrives when Democrats are in office, which is another set of perverse incentives. There’s the conservative closed information feedback loop, with Republican Party actors and politicians failing to see the U.S. that the rest of the nation sees.

Then there’s the legacy of Newt Gingrich and other destructive party successes. Gingrich was always a fan of blowing things up in order to benefit; today’s Tea Partyers have certainly been influenced by that example, which is not only repulsive but also doesn’t actually work very well in most cases. It’s no surprise that Ted Cruz and other Tea Partyers chose a hostage-taking shutdown as their weapon of choice; they were only following Newt’s disastrous example. Nor is it a surprise that it turned out the same way. It’s also about the legacy of Gingrich (and Richard Nixon, and Joe McCarthy) of always thinking of one’s political rivals as the most intractable of enemies; that kind of thinking turns compromise from an art necessary to achieve what is achievable into a moral outrage. Once resistance to compromise itself becomes an important principle, episodes such as the shutdown are hard to prevent.

The key point to emphasize here is that the problem with the Republican Party, or at least the problem that causes shutdowns and other such disasters, isn’t that they’re “too conservative.” If that was all that was going on, they could still reach compromises with Democrats. The problem isn’t about ideology, at least not as we conventionally think of it; it’s about willingness to compromise and to work within the political system.