With disregard for Malala's faith and actual opinions, the atheist thinker uses her to continue his anti-Muslim war 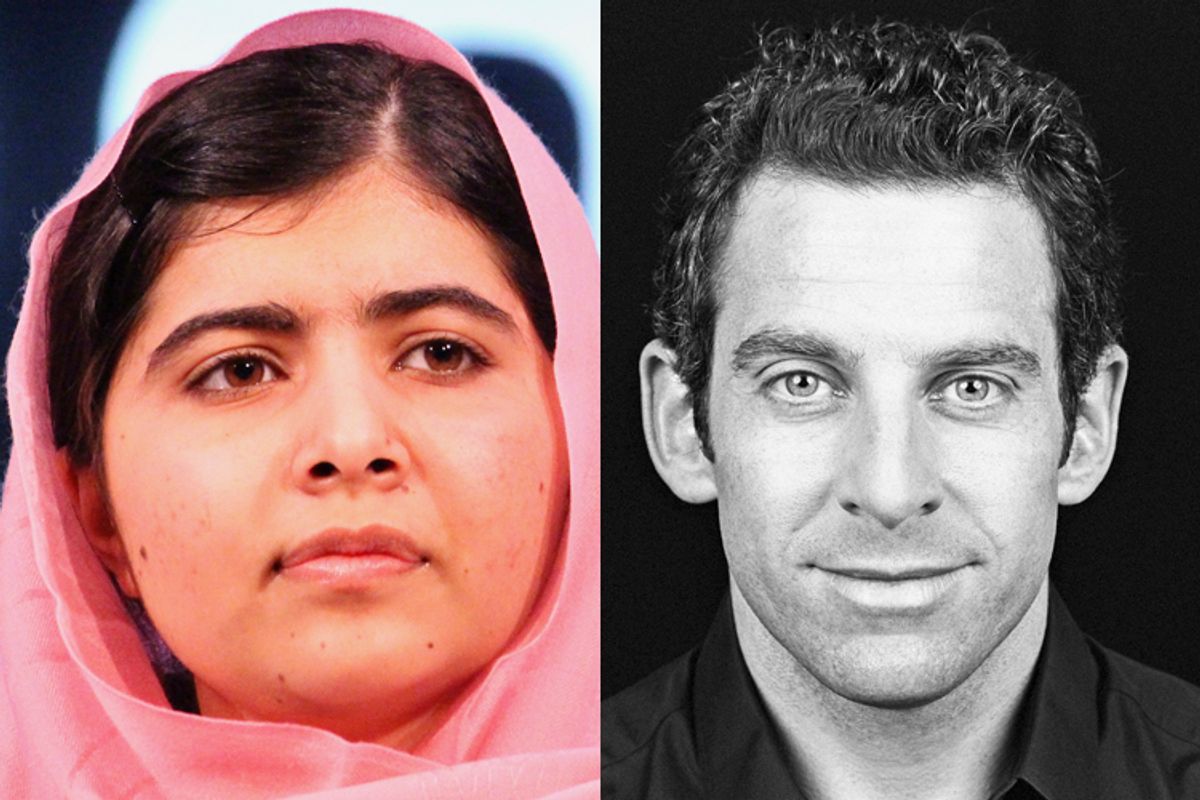 In an era of narcissistic self-obsession, there’s something to be said for the value of self-awareness. This week, atheist philosopher Sam Harris leapt forward to claim Malala Yousafzai as another trophy in his one-man jihad against Muslims and the weak-kneed “Muslim-apologists” he perceives on the left.

That Harris has been denounced as a crude, pseudo-intellectual bigot for his various tirades about the monolithic evil of Muslims didn’t do much to deter him; but what was most interesting about his latest missive was its complete disregard for Malala’s actual words and opinions. Either he didn’t listen to her words at all before plastering her face on his website or he was too contemptuous of her to think it necessary.

Given the requisite beliefs…. an entire culture will support such evil. Malala is the best thing to come out of the Muslim world in a thousand years. She is an extraordinarily brave and eloquent girl who is doing what millions of Muslim men and women are too terrified to do—stand up to the misogyny of traditional Islam

It’s worth pausing here to listen to whether Malala thinks that she is standing up to her own evil culture and the misogyny of "traditional Islam":

"The Taliban think we are not Muslims, but we are. We believe in God more than they do, and we trust him to protect us…..I'm still following my own culture, Pashtun culture….Islam says that it is not only each child's right to get education, rather it is their duty and responsibility."

Whatever one thinks of this, given that these are Malala’s beliefs, anyone with a modicum of decency or respect for her would not go ahead and use her suffering as a tool to attack the very things she is fighting to defend. Yet Harris takes up this opportunity with great vigor. For him it doesn’t matter whether Malala believed she was defending traditional Islam, because anyone who tries to differentiate Islam from the acts of extremists are part of the “tsunami of stupidity and violence breaking simultaneously on a hundred shores … the determination that 'moderate' Islam not be blamed for the acts of extremists.'”

Besides their own unique brands of extremist myopia (one formed in Ivy League universities, another in the illiterate villages of a war-torn country) what Harris and the Taliban also have in common are that neither considers Malala to be a genuine Muslim. Without even the pretense of substantiating his argument, Harris claims that criminals such as al-Qaida and Al Shabab – universally denounced among religious authorities in the Muslim world – have “have as good a claim as any to being impeccable Muslims.”

It’s unlikely that anyone who possessed even the tiniest legitimate regard for Malala’s struggle would co-opt her views so blatantly to pursue their own seething bigotries against her culture and beliefs. Endorsing Malala’s Nobel-worthiness and using her photograph without paying even minimal attention to her own views is emblematic of Harris’ naked condescension toward the “millions of Muslim women, freethinkers, homosexuals, and apostates” whom he constantly promotes himself as the savior of.

Aside from his flailing attempt to add Malala to the list of brown women in distress rescued by his virtuous blogging, Harris repeats a litany of facile arguments about terrorist violence that appears to evince near-absolute ignorance about the subject. According to Harris, although the terrorists who attacked the Boston Marathon and a soldier in Woolwich, England, both claimed to be acting due to “military actions in Iraq and Afghanistan” and said that "the only reason we did this is because Muslims are dying daily," he alone knows that this is a cheap ploy to distract from their single-minded religious ecstasy.

For a man who believes that the Iraq War was fought for a great "humanitarian purpose," it is obviously impossible to fathom how such an action could result in any form of "blowback" other than a bouquet of flowers and profound thanks. Harris goes forward to claim that since neither of the attackers were Afghan or Iraqi themselves, this is thus proof that their actions were apolitical and rooted solely in religion. How Harris knows this secret truth – a belief that stands in complete contrast to the actual claims of the perpetrators – is never really explained.

As he helpfully adds about Malala toward the end of his piece: Her nomination is said to have noticeably increased anti-Western sentiment in Pakistan — a fact that deserves some honest reflection on the part of Islam’s apologists ...

Given her own words, Malala is ostensibly among the “Islam apologists” he is targeting; but this doesn’t come into play in Harris’ myopic worldview. Although Malala may claim to be a devout Muslim acting in accordance with Islam, this is merely an inconvenient detail that can be safely ignored. Harris doesn’t cite how exactly he knows that her nomination has increased "anti-Western sentiment" in Pakistan or what exactly he’s basing this belief on; but he doesn’t have to. It’s simply another expression of the naked ignorance and fear of the brown, Muslim hordes on the other side of the Earth, which Harris has built his career on.

When you don’t even feel you have to listen to the voices of the people whose cause you’re championing, it’s a reasonable indication of the fact that this has less to do with them than with you. Malala Yousafzai deserves to be respected and understood on her own terms; Harris’ cringe-worthy attempt to co-opt her name and image is yet another ugly episode in an increasingly sordid intellectual career.