How I met your father

Michael ran the men's club where I stripped. Ours wasn't an old-fashioned courtship -- but it was still romantic 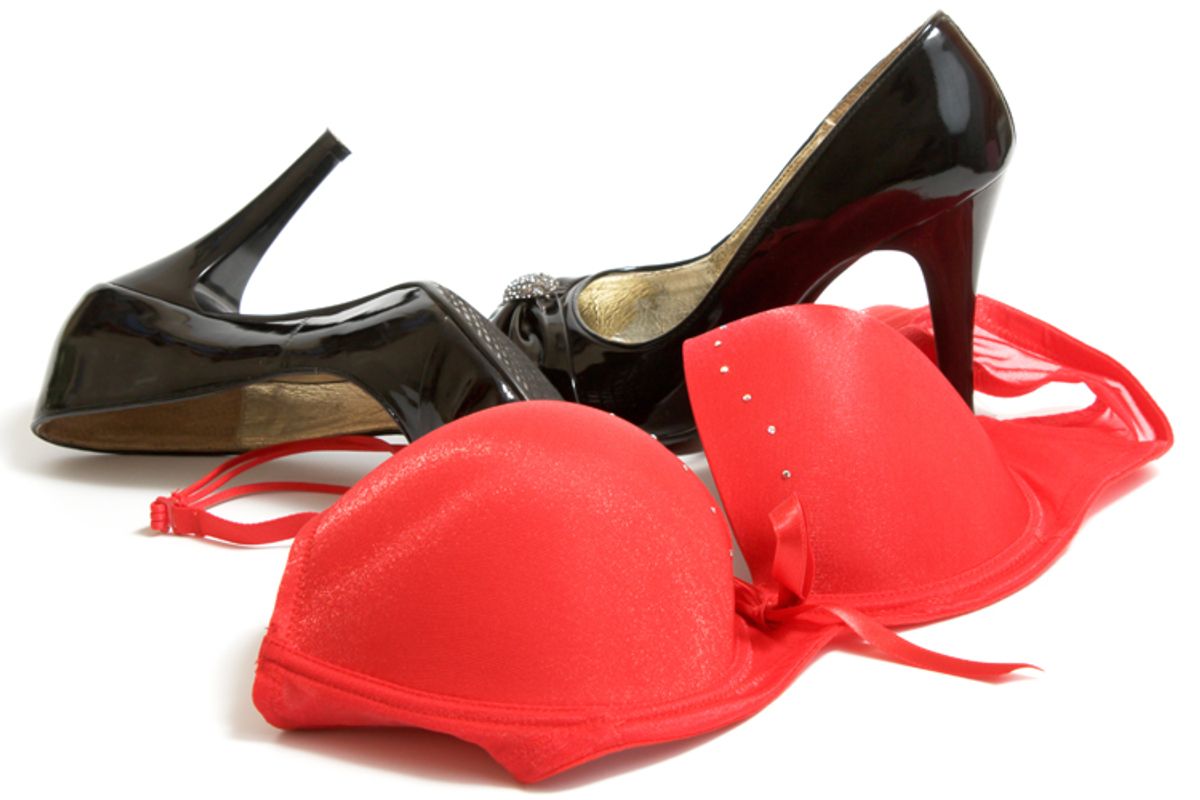 When people ask us where we met, we have a skeletal version of our story we can tell, without flinching. We met through a mutual friend. We were friends for many years, and then we finally realized we were in love with each other after I stopped dating losers. After my now-husband came back from a long trip to Costa Rica, we knew. It was love the whole time. This is all true. The only thing we leave out about how we met is where.

We still exchange looks whenever we drive by, on our way to a potluck or a kid’s birthday party. We are careful not to say too much so we don’t pique our 5-year-old daughter’s curiosity, which is vast.

The real story, with all of the details, would sound like this:  I came into work one day and found out from Raven -- another lingerie model and a friend of mine -- that we had a new owner. “He’s really cool,” Raven said. “You’ll love him.” We went to the office.  I was wearing red booty shorts and black vinyl thigh-high boots. A white shirt with cherries on it that tied at the midriff.

He wore glasses. He smiled and shook my hand firmly. He looked me in the eye. (I found out later his father taught him to do that when he was a kid so he could impress people at his father’s law firm.) “Olivia slash Erika,” I said. He said hello. He looked at my face only and did not make any comments on my appearance. Bonus: pretty blue eyes.

Working at the jack shack was like being in an existential play. We waited for men to come in. It was considered an average day if three men came in during the course of an eight-hour shift. Ten meant we were slammed. Usually there were two lingerie models per shift. There was a long hallway that led to two “show” rooms, a dressing room, a bathroom, a security room that had a monitor that was watched by a security guard at all times, and a waiting room for the dancers to wait for a show. The waiting room had a television and an old brown couch, a few ashtrays and a bunch of board games. When a man came in up front, we were alerted by an electronic doorbell.

When the bell sounded, the lingerie models would walk up to the front. We were protected by a locked door and what was basically a wooden bank teller-style window, which was painted glossy black. We would both smile and say hi. One of us would say, “Would you like a show?” The man would look at the girls, typically for 15 seconds or so, and decide. The man would go down the hallway to a private room and the 30-minute show would commence.

There were a lot of girls that came and went over the year I worked there. Most of them wanted a break from working in the topless bars, which were more physically demanding, or they had a specific financial goal they were working toward. They needed the money for their other business (one girl made her own handbags), or someone’s hospital bills or an abortion.

I was kind of a crappy lingerie model. It annoyed me when guys came in and interrupted my Scrabble game. After almost a decade in the sex industry, it was getting really old. I was over it. I was 28. I took breaks from stripping over the years but always came back to it. Ultimately, I didn’t want to give up the freedom that stripping afforded me.  I didn’t really want to work. I liked rolling out of bed at 11 a.m., smoking and drinking coffee and talking to artists and writers and other people who didn’t work conventional jobs. I was into low expectations.

Michael was the kindest, most generous person I had ever met in the sex industry, which is why he failed at it miserably. He would rent videos for us to watch so we wouldn’t get bored. Instead of firing girls who didn’t show up to work, he drove to their house to drop off their paychecks. Lunch was frequently on him. He demanded nothing of us, so he was taken advantage of left and right. The boy was in way over his head. Young and fresh-faced, he had taken over the business from someone he had known from high school. My husband had dropped out of college and was looking for a way to further rebel against his father. He admitted this freely.

Michael had never dated anyone longer than a few months. He said he hated dating because it was fake. “I’d rather just find the one girl and get married.” But he didn’t like putting himself out there.

I was in a toxic relationship and was wondering what in the hell to do with my life. I wanted someone who would listen to me and would be a rock and call me on my shit. This was harder to find than I had originally expected. After a decade of being cynical and dramatic, what I really wanted was to be vulnerable and romantic.

The first time we really connected is when we both sang “Aguas de Marco” in the dressing room.  I sang in fake Portuguese.  He thought I knew the words and was very impressed.  “I’m totally faking it,” I said, laughing.  I told him I didn’t want to know the words; the song meant more to me without knowing them.  He nodded like that made sense to him.  We looked at each other in the dressing room and that is precisely when I realized he was going to be my friend.

My birthday party was at a bar on Congress Avenue that night, and he showed up.  He brought me a present.  It was the only gift I received that evening.  The Jobim CD with “Aguas de Marco.”  His thoughtfulness shocked me.  We spent a long part of that night listening to a mediocre rockabilly band, pretending we knew how to swing dance. He threw me around and we laughed. We still do this, after eight years of marriage.

At work the next day, he said, “You should go to college.  You’re really smart.”  I said I was smart enough to avoid college.  I said I couldn’t afford it.  He said I could take out loans and grants.  I said I was too old.  “Differences are good in college,” he said. I’d never seen anyone from my family go to college and had no idea how to do it. With his help, I got the loans and grants and started going to community college and transferred to the University of Texas. I graduated with honors and finished grad school two years after that.

Sometimes we tell people the truth about how we met. It depends on whether they are good friends, or if we think they could be. It depends on their sense of humor and also probably their age.

Our oldest is 5, our youngest 18 months. In the evenings after work, I push my daughter on the blue swing in the backyard, on the playscape that came with the house. She loves to have long, important conversations with me this way. “Tell me again,” she says, “about when you and Daddy met.”

“We were at a party that wasn’t very fun.  Then my friend said, ‘You should meet Michael, you would love him.’  So I walked over to him and I shook his hand.  I liked him right away.”

“And that’s when you knew he was your prince?”

“Then tell me when you fell in love, Mommy.  Like when you noticed you were going to get married.”

“And then you got married? And then I was born and we became a family of three? Is that what happened?”