Even one-quarter of Republicans don’t think like them, Pew finds 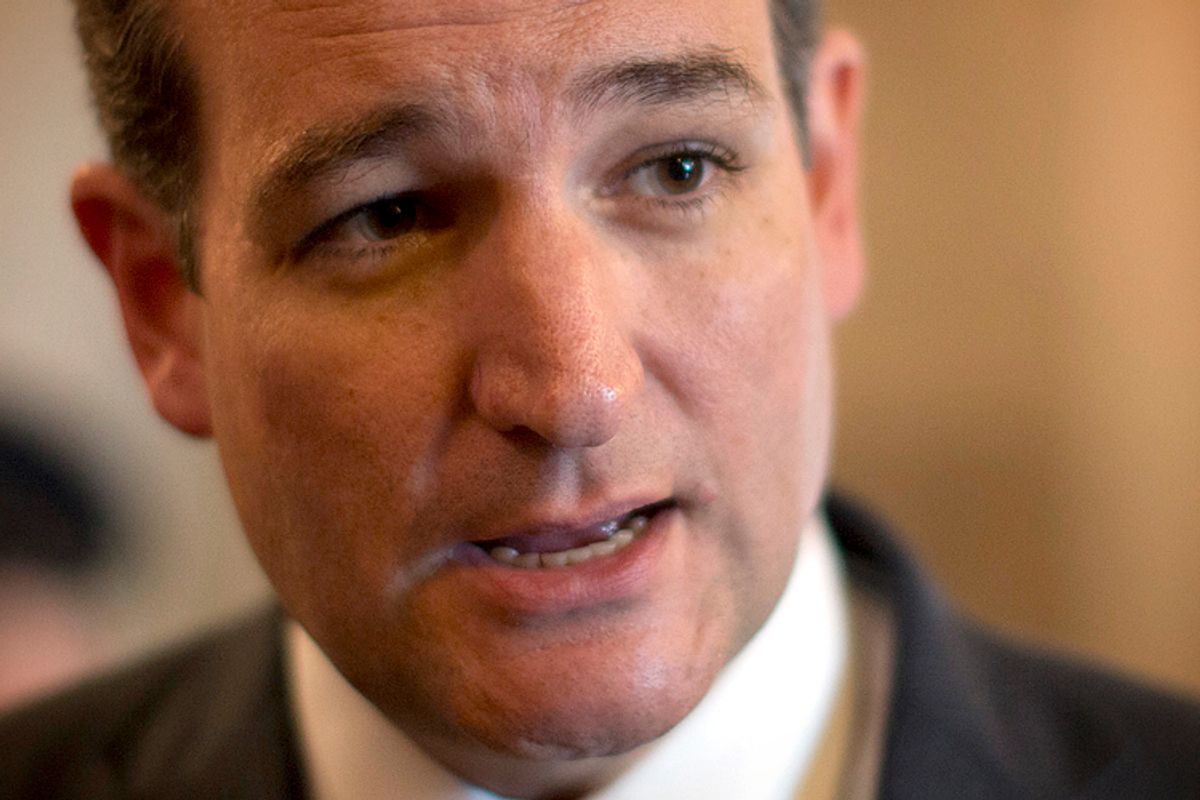 Now that the federal government has reopened and its debt limit raised, the Tea Party is more unpopular with Americans than ever—including among moderate Republicans—polls are finding, with analysts asking if the Tea Party is part of the GOP at all.

“The Tea Party is less popular than ever, with even many Republicans now viewing the movement negatively. Overall, nearly half of the public (49 percent) has an unfavorable opinion of the Tea Party, while 30 percent have a favorable opinion,” the Pew Research Center For People And The Press said in its latestpoll and report.

“For Republicans, the decline is steepest among those who describe themselves as moderate or liberal. Today, only about a quarter (27 percent) of moderate and liberal Republicans have a favorable opinion of the Tea Party movement, down 19 points from June,” Pew said, after surveying 1,500 adults over 18 across the country between Oct. 9 and 13. “Yet the Tea Party’s ratings have also declined among conservative Republicans, from 74 percent favorable in June to 65 percent now.”

Since the standoff ended, there’s been no shortage of media reports about the Republican Party tearing itself apart—with rightwingers accusing leaders in Congress of “surrender” and finger pointing at usual targets such as the media's supposedly liberal bias. Tea Party leaders such as former South Carolina Sen. Jim DeMint, now president of the Heritage Foundation, vowed in a Wall Street Journal column Friday that the fight to destroy the Affordable Care Act will continue. Meanwhile, another Tea Party darling, Kentucky’s Sen. Rand Paul, is AWOL in this fracas, perhaps nursing his 2016 presidential bid.

But no one should think that the Tea Party’s latest failures will make them go away. This faction, as epitomized by Texas Sen. Ted Cruz declaring that the shutdown was a victory, is unapologetic, arrogant and proud of it. As Pew notes, Tea Partiers share 10 beliefs and causes that make most Americans cringe—not just Democrats but millions of moderate and liberal Republicans. Let’s look at those views and values, according to Pew.

1. They really don’t care about America as a nation. For the past 25 years, Pew said that polls routinely find that about 55 percent of American voters want representatives in Congress to put local concerns ahead of “what they think is best for the country.” Tea Partiers disproportionately take that view. “Among Tea Party Republicans, fully 76 percent say members should vote against a bill their constituents oppose, even if he or she thinks it is in the best interest of the country,” Pew said. “Just 22 percent say the lawmaker should prioritize the national interest.”

2. Forget national solutions to national problems. Since three-quarters of Tea Partiers value a confederacy of GOP-run provinces more than an effective national government, it’s not surprising that they are always talking about making government smaller. But, as Pew found, that rhetoric means dismantling big public programs and overlooking public needs that were behind their creation in the first place.

3. They don’t believe in new government debt. Despite all the warnings by economists and even foreign leaders, such as Italy’s prime minister speaking at the White House on Thursday—who feared a default would raise global interest rates and spark a downward spiral—69 percent of Tea Parties said it was “not essential” to raise the U.S. debt limit, Pew said. That was 25 percent higher than “non-Tea Party” Republicans, Pew said.

4. They think Wall St. should be deregulated. Even though 2008’s global economic collapse started on Wall Street with bad bets by investors on the U.S. housing market, 79 percent of Tea Partiers say that government had gone too far with “regulating financial institutions,” Pew said. That was 26 percent higher than non-Tea Party Republicans.

5. They hate Obamacare.This is no surprise, of course, because the Tea Party crusade to repeal or defund the Affordable Care Act was the spark and rallying cry behind the government shutdown. Pew found that 95 percent of Tea Partiers opposed Obamacare, compared to 80 percent of non-Tea Party Republicans.

6. They’d gut Social Security and Medicare. Pew found that 73 percent of Tea Partiers would cut funds to these retirement programs to pay down the federal debt, which, again, is consistent with their “I’ve got mine; go get yours” mentality. Notably, Pew found that 46 percent of non-Tea Party Republicans said funding those entitlement programs was a more important priority than paying down the federal debt.

7. They Also Want To Outlaw Abortion. Pew found that 64 percent of Tea Parties want abortion to be illegal, compared to 51 percent of the rest of the GOP. While some polling firms have said that the Tea Party’s libertarian leanings are at odds with the evangelical wing of the party on this issue, Pew’s findings suggest overlap on the rightwing fringes—where evangelicals now are identifying themselves with the Tea Party movement.

8. They Oppose Same-Sex Marriage. Here too, there seems to be a blending of the libertarian and evangelical right, as 69 percent of Republicans who identified with the Tea Party opposed same-sex marriage, compared to 54 percent of non-Tea Party Republicans.

9. They want more oil and gas drilling.Tea Partiers have railed against climate change science and government responses because they feel it will bring more federal regulation of consumers. Pew found that 73 percent of Tea Partiers want to “expand traditional energy,” which means oil, gas and fracking, compared to 53 percent of non-Tea Party Republicans who want to “develop alternatives.”

There are many more defining features of Tea Party Republicans, such as the hostility to political compromise, an impulse to destroy public programs instead of creating public solutions, and their arrogant claims that they represent a majority of Americans when—as Pew’s poll demonstrates—they do not even fully represent the Republican Party.

Pew’s latest report underscores just have far to the right the Tea Party is—taking view after view that one-quarter of other Republicans reject. Whether these more moderate Republicans will join with Democrats and work for effective governance remains to be seen. We now have a clear view of what defines this radical right-wing block that, by almost every measure, is out of step with what’s good for America.

It remains to be seen how the Republican Party’s more centrist leaders in Congress will try to rebrand their party and counter its firebrands. But Tea Partiers are not quietly going away into the night. As Jim DeMint’s Wall Street Journal op-ed opened, “the president has preserved Obamacare for the time being…”