"12 Years a Slave" cinematographer says film brought him to tears

Cinematographer Sean Bobbitt on the film's performances, its Oscar chances, and how it compares to his war coverage 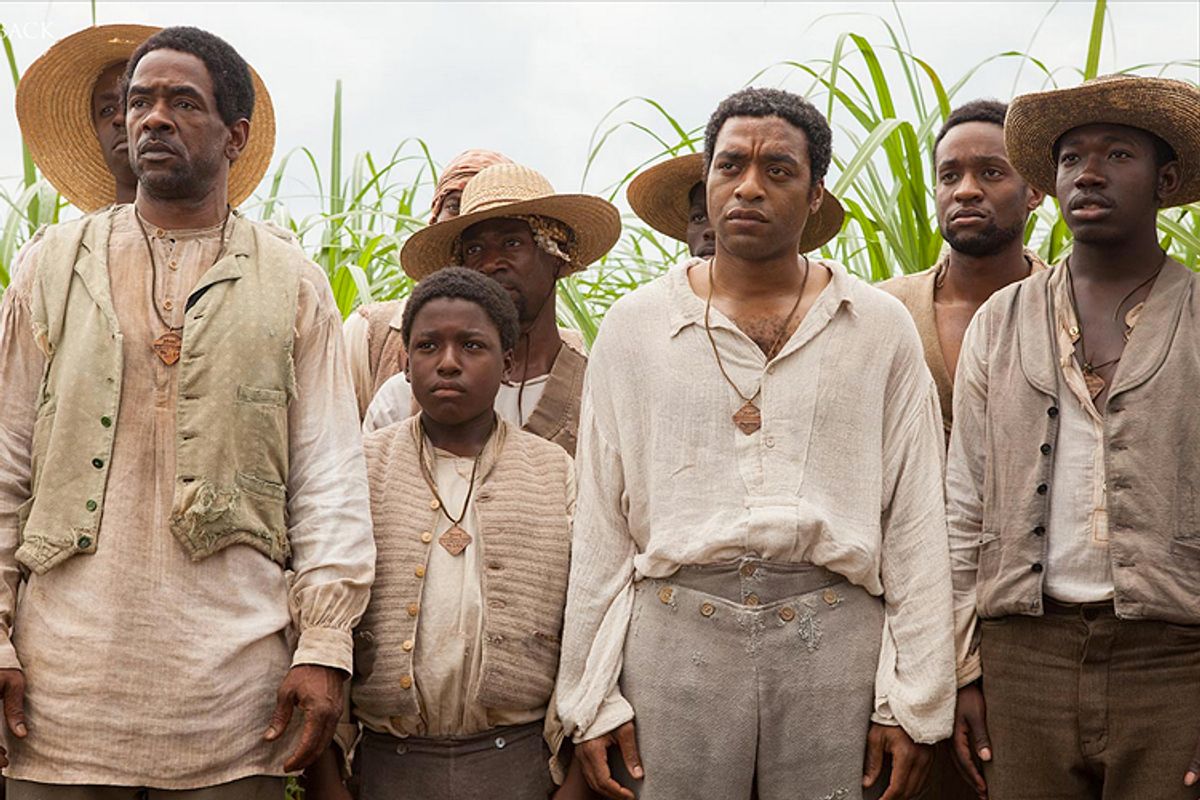 Sean Bobbitt was on set for every bit of shooting of the year's most viscerally affecting film, "12 Years a Slave," capturing weeping and horrible physical and mental abuse. And yet he was always aware it was just a movie.

That's because Bobbitt began his career as a war photographer, covering the conflicts in Lebanon among other world events. Bobbitt came to consistent filmmaking via director Steve McQueen, whose first two films, "Hunger" and "Shame," Bobbitt shot before taking on "12 Years a Slave," a yet more distressing project.

"12 Years a Slave," out in limited release last week and expanding soon, depicts more than a decade in the life of Solomon Northup, played by Chiwetel Ejiofor; Northup was kidnapped away from his life as a Northern free man and sold into slavery. The film, like Bobbitt's previous collaborations with McQueen, is visually striking, distinguished by long, unblinking takes. Bobbitt told Salon that he was able to distance himself from what was unfolding before him: "The suspension of disbelief is zero because I've got a bloody great camera on my shoulder."

Bobbitt spoke to Salon, too, about how his working style was informed by his time in Lebanon, how Steve McQueen kept the set's spirits afloat, and why he doesn't believe filmgoers should notice the cinematography.

Tell me about how news photography prepared you for shooting films.

We're all the sum of our histories. News was a fantastic training ground for storytelling -- you work in real time on a very complex story which you have to distill to 30 seconds or a minute. It puts you in very good stead for life in the world of drama. You watch, listen and respond very quickly to drama. News teaches you, too, about light and how light works and where to situate yourself and your camera to get the best shot. It teaches you how to shoot sequences, how to hold a shot and let the action develop.

Were you able to be as creative as you are now in the world of news photography?

The demands while working in a war zone -- well, first, you have to survive the day. That makes everyone happy. If you bring back images, everyone is happier. If you bring back images that are effective or memorable, everyone's overjoyed. People look down on news cameramen. But I don't -- I understand the danger you put yourself in to create those images and the sheer beauty and power of those images you can create under really harsh circumstances. A lot of people ask me about how difficult it was to film the beatings and whippings. I've seen so many worse things in real life. And on a film, I've already read the script. I know it's not real life. I never believe it's real. Bizarrely the sequence where Solomon is whipped by the foreman was one of the most enjoyable shots I did because of the challenge of doing it in one continuous hand-held shot. Everyone would like me to say I was so distraught -- but I'm so engaged technically. The suspension of disbelief is zero because I've got a bloody great camera on my shoulder.

Define to me your signature style.

You should be able to make any kind of film. I've always fought against being stereotyped. I would hope that I don't have a defining signature, but that I find through the director a visual style for each film that helps further the storytelling more than furthers my career or my reputation. I think people are starting to pick up more on the longer continuous hand-held shots, which I enjoy immensely doing and they're a great intellectual exercise.

Are you able to enjoy watching the film given your inability to suspend disbelief on set?

The whole process of filmmaking is you do so many takes of each shot, each scene, that all disappears and gets edited together, then you spend two weeks or longer grading each shot. You become acutely familiar with every shot. Usually not with the sound or the music in a continuous run. I try to see the film with an audience and to just watch the film. I find that absolutely impossible because all I see are the little mistakes. In two or three years time I am able to sit down and watch it.

I will say, though -- the first time I did watch "12 Years a Slave" with an audience I was in tears. As much as I was distracted by elements that stand out as problematic, the emotional power of performances was enough to draw me in and to emotionally affect me.

I understand that the shoot was not rushed, but also not exactly leisurely. How did that affect your process?

All films are created through compromise. There is never enough time to make the film you'd wish to make. Whatever you do expands to fill the space of the time you have. The pressure of having to get it done is a powerful creative element. Sometimes you can overthink things and become a bit too precious. I quite like the pressure of the deadline. It makes people concentrate and make decisions. Filmmaking suffers through indecision. I love working with Steve McQueen. He's so decisive. He knows if something is right or not. The momentum is maintained the whole time. There's nothing worse than a film set grinding to a halt. You really wish to avoid that.

By week five, you're relying on adrenaline to keep you going. If the momentum slacks, everyone's adrenaline goes down. You've got to try to keep the adrenaline up. And we had no choice. But Steve is a great people person, and he's a great judge of mood. When things were getting heavy, Steve would lighten it up. He would go around and thank everyone at the end of a hard day's work, and people felt they were engaged in the work. When you have a crew that's motivated, nothing is impossible.

The shot that affects me the most is the very simple close-up of Chiwetel, near the end. It kind of comes out of nowhere, just a very long shot of him -- he looks to camera right and then he looks straight down the lens. There's nothing happening on its face -- but you can feel everything that's happened to him the last 11 years. By looking in the lens, it strikes you straight in the heart. It drags you into his world. It's a strong connection.

Usually when an actor stares into the camera, it's done out of humor, it's wry, a bit of an inside joke. This has the opposite effect and it's the more remarkable for it -- it's a brave thing to do and he pulls it off. The sheer power of his performance is astounding. I have the privilege of operating the camera. My eyes are the first eyes these images go through. It's such a privilege to witness that level of performance.

Tell me about this film, and about the Oscar buzz surrounding it and your work in particular. Does this bother you? Is it exhilarating?

I don't make films to win awards. I'd be an idiot to say I'm not excited about the prospect of being in the running. I've never expected it, and it's a long way to go from news cameraman to potential Oscar nominee. At the same time, it's not -- how do you say this? -- it's not that it's not important and it wouldn't be a great honor. I'm not that flustered about it.

I've always believed that if someone walks out of a film and says, "The cinematography was great," I have failed. They should say "This made me cry, made me angry, made me happy," first. Then they should discuss the actors. The cinematography should be fourth or fifth down the list. This is about Solomon Northup and these amazing performances.