Hard-right, anti-government ideologues make poor coalition partners, even if they're right on surveillance 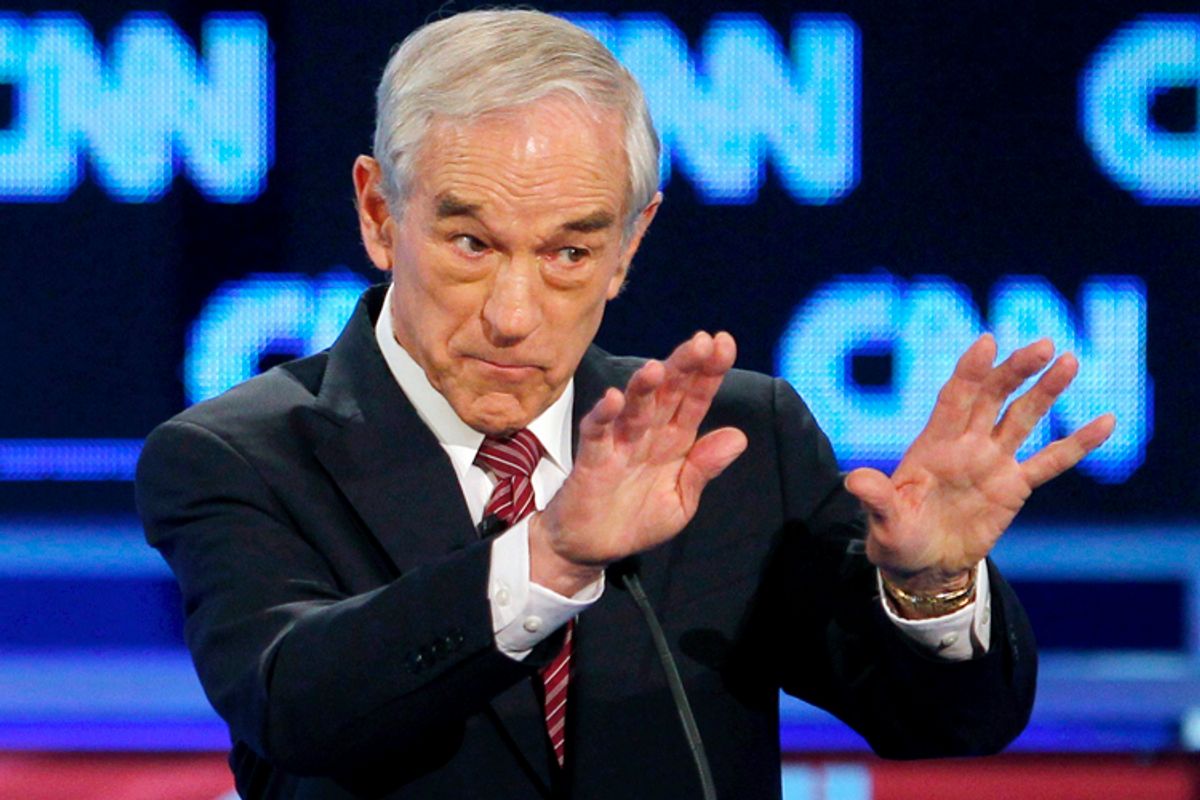 On Saturday, a coalition of critics of the U.S. surveillance establishment will gather in Washington, D.C., under the banner Stop Watching Us for a rally asking Congress to "stop the NSA’s unconstitutional mass surveillance." Participants will gather in front of Union Station and march to the reflecting pool in front of the Capitol.

Some of the biggest names in civil liberties and digital freedom of information will be there, including the ACLU, Electronic Frontier Foundation, FreePress and FreedomWorks. Sponsoring individuals include a great number people I admire (and in some cases, know very well), including Tim Berners-Lee, Daniel Ellsberg, Xeni Jardin, Eli Pariser, Anil Dash, Dan Gillmor, Rebecca Mackinnon, Glenn Greenwald, John Cusack, Molly Crabapple, Birgitta Jónsdóttir, and Andrew Rasiej. Companies backing the effort include Reddit and Ben & Jerry's.

"We demand the U.S. Congress reveal the full extent of the NSA's spying programs," is the basic demand of Stop Watching Us.

This is a vital cause, and I agree with it.

Yet I cannot support this coalition or the rally. It is fatally compromised by the prominent leadership and participation of the Libertarian Party and other libertarian student groups; their hardcore ideology stands in direct opposition to almost everything I believe in as a social democrat.

The Libertarian Party itself -- inaccurately described by Stop Watching Us as a "public advocacy organization" -- is a right-wing political party that opposes all gun control laws and public healthcare, supported the government shutdown, dismisses public education, opposes organized labor, favors the end of Social Security as we know it, and argues in its formal political manifesto that "we should eliminate the entire social welfare system" while supporting "unrestricted competition among banks and depository institutions of all types."

Yet my progressive friends would take the stage with the representatives of this political movement? Why? The loss is much greater than the gain. Organizers trade their own good names and reputations to stand alongside -- and convey legitimacy to -- a party that opposes communitarian participation in liberal society, and rejects the very role of government itself. And their own argument for privacy is weakened by the pollution of an ideology that uses its few positive civil liberties positions as a predator uses candy with a child.

This is an abandonment of core principles, in my view, out of anger over Edward Snowden’s still-recent revelations about the National Security Agency and its spying activity, particularly domestic access to telephone and online networks and metadata. It represents trading long-held beliefs in social and economic justice for a current hot-button issue that -- while clearly of concern to all Americans -- doesn't come close to trumping a host of other issues areas that require "the long game" of electoral politics and organizing. Going "all in" with the libertarian purists is a fatal and unnecessary compromise; reform is clearly needed, but the presence of anti-government laissez-faire wingers at the beating heart of the privacy movement will surely sour the very political actors that movement desperately needs to make actual -- and not symbolic, link bait -- progress in its fight.

I speak of the progressive movement and the Democratic Party, of course.

For those whose feet still touch the ground, the path to NSA reform so clearly lies inside the Democrats' big tent - and runs through its liberal wing. And because we are a liberal republic, whose central government is not leaving the landscape anytime soon (the libertarians' fondest goal), change must also run through an elected Congress.

Indeed, Stop Watching Us explicitly acknowledges that fact - on the same page it proudly lists the Libertarian Party along with two libertarian youth groups, Young Americans for Liberty and Students for Liberty, as sponsoring partners.

Reading these groups’ websites surfaces another reason why Stop Watching Us should have rejected their participation in a progressive coalition: common sense.

Let's look at Young Americans for Liberty. The section titled Ron Paul's Endorsement should be a tipoff:

Back in the 1960s, an influential youth movement formed around another anti-establishment presidential candidate. His name was Barry Goldwater. The organization was called Young Americans for Freedom; and without it, we may have never seen Ronald Reagan in the White House.

I have high hopes for Young Americans for Liberty, and wish them a similar fortune.

Similar fortune, indeed. And then there's the blog post on the group's front page on the disastrous government shutdown and flirtation with defaulting on the nation's debt payments:

Usually, I'm a fan of gridlock, because I'm a fan of winding down the state.  I romanticize about the idea of a permanent government shutdown and the elevation of a free humanity based on natural law and virtue.

"Winding down the state." Nice partner for serious surveillance reform there. Dig a little deeper and you find open support for the "militia movement" and other hard right activity, and the labeling of the Southern Poverty Law Center as one "of the biggest enemies of our liberty." And the organization specializes in tweets like these:

After just a few days of shutdown, the country is in ruins...oh, wait, that's Detroit when the gov't was "helping."

Students for Liberty, meanwhile, offers "resource kits to pro-liberty high school students" filled with slogans, stickers and palm cards from partners like the Cato Institute, the Atlas Network, and the Seasteading Institute (an anti-government group that that encourages the establishment of libertarian offshore nirvanas where survival of the fittest trumps American laws). And gee, isn't it great that Students for Liberty has distributed 150,000 copies of "After the Welfare State" on campuses around the country, a book that helpfully explains how social programs are "used as an immoral tool of state control and subjection."

These are the people who will march on the Capitol with Daniel Ellsberg, Tim Berners-Lee and Glenn Greenwald.

I certainly understand the need for a non-partisan -- or multi-partisan, to be accurate -- movement. And yes, there is some narrow cross-over between the politics of the Pauls and the hardcore libertarian movement with those who consider themselves to be civil libertarians of the political left and center.

Further, there are many people these days who self-identify in some ways as "libertarian" but hold no real complicity in the actual radical manifesto of the national party and its related organizations. It's almost a fad, really, and therein lies the danger, as I perceive it.

Political change requires choices and compromise, as well as action. If too many young organizers focus entirely on privacy and security and abandon the front lines on crucial economic issues, civil rights and inequality, the rights of workers, criminal justice reform, environmental regulation, and the pursuit social justice, their gains will be too little and society's loss too great.

Or libertarianism itself will rise, and our loss of liberty will be greater still. That's because libertarianism is a form of authoritarianism disguised in a narrow slice of civil liberties. In trumpeting the all-knowing, ever wise wonders of the totally free and unencumbered market, it bestows all the power on those with access to capital. You may say we're there already, but under a pure libertarian system, things would get much worse.

Writing in the Guardian about the growing UK Independence party, a libertarian political group in Britain, Ed Rooksby notes that: "As paradoxical as it may seem, rightwing libertarianism has always been a deeply authoritarian political philosophy. It claims to value liberty in some general and all-encompassing sense above all other principles, but the particular types of freedom libertarianism seeks to defend and extend are always, tacitly and implicitly, forms of liberty for the few at the expense of the many. Thus libertarianism stands for the unfreedom of the majority."

In the end, it's always about the man on the balcony -- which, deeply flawed as our democratic institutions are, isn't the point for our elected politicians. No wonder, says Michael Lind in his must-read Salon essay, that libertarians revere "Friedrich von Hayek, who was, along with von Mises, one of the patron saints of modern libertarianism, was as infatuated with the Chilean dictator Gen. Augusto Pinochet as von Mises was with Mussolini."

As Lind notes, "While progressives betray their principles when they apologize for autocracy, libertarians do not."

That's because it is their philosophy. And in a progressive, civil libertarian coalition to advance the cause of privacy and limited government surveillance, this form of "I've got mine" nihilism has no place.

Stop Watching Us supports a noble and important cause, but its coalition is -- currently -- fatally infected. It's one thing to march in order to change government. In our republic, it's quite another to march with those who would see it abolished.

Tom Watson is a New York based journalist and consultant to progressive causes who writes the Social Ventures blog for Forbes. Follow him on Twitter @tomwatson.