Pundits breathlessly pivot from covering GOP extremism to Healthcare.gov glitches, with the backing of liberals 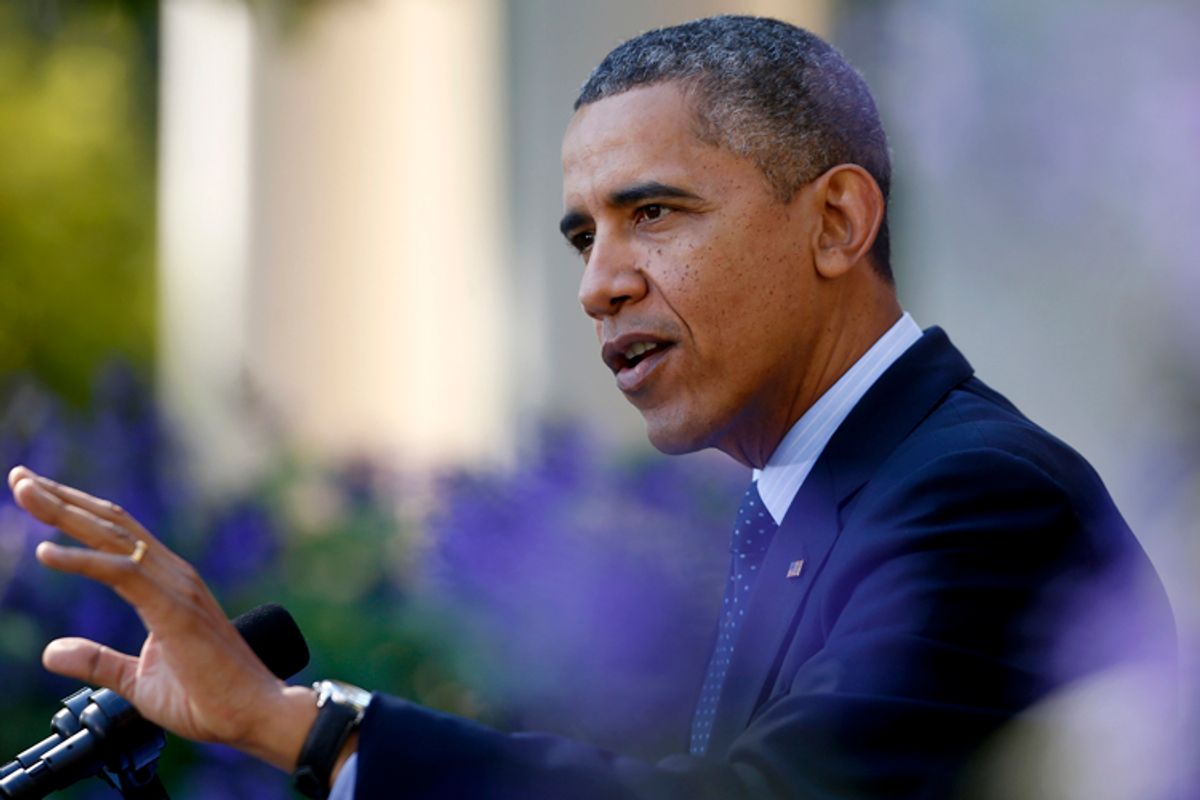 Barack Obama speaks in the Rose Garden of the White House in Washington, Monday, Oct. 21, 2013, on the initial rollout of the health care overhaul. (AP/Charles Dharapak)
--

As predictably as night follows day, on Monday the media establishment pivoted away from obsessing about GOP extremism and the party’s alleged “civil war” to the “train wreck” that is, allegedly, the Affordable Care Act.

And liberals helped lead the pivot.

Don’t get me wrong: The problems with Healthcare.gov are real, and disturbing, and must be fixed asap. (Think Progress has a dispassionate assessment here.) But excuse me if I believe the president knows that without my telling him. It’s like watching the 21st century version of the rise of the Democratic Leadership Council, and I feel the way I did back then: On the one hand, yes, it's important for Democrats to acknowledge when government screws up, and to fix it.

On the other hand, when liberals rush conscientiously to do that, they only encourage the completely unbalanced and unhinged coverage of whatever the problem may be.

It was predictable that the media would go nuts about this today, given that they've spent so much time having their noses rubbed in how insane the GOP has become, after trying so hard, for so long, to ignore it. It feels like a law of nature. Nature abhors a vacuum; media nature abhors a false-equivalence vacuum. I feel like I saw it start on Thursday, when the New Yorker’s Ryan Lizza, a writer I like and admire, tweeted something farcical:

Who will be more discredited this year: conservatives for pushing us to brink of default or liberals for failure of health care exchanges?

C'mon @RyanLizza, are you trying to parody false equivalence? You're way smarter than that!

And he shot back:

@joanwalsh The ACA is the most important liberal project in decades. If it fails, it is a complete disaster for liberalism.

That seemed premature to me – even a disastrous website rollout can’t be a stand-in for the entire Affordable Care Act -- but of course Lizza’s pronouncement was retweeted widely and for days. The Washington Post’s great Ezra Klein then picked up the cudgel, telling the crew at MSNBC’s “Morning Joe,” where every Obama misstep foretells the end of his presidency, that the Health and Human Services Department is covering up a massive “management failure,” because they had enough pre-launch information to know there were going to be massive problems and neither adjusted their rollout plan or prepared the public.

That’s fair, but then Klein took to Twitter and began sharing his experience trying to sign up for healthcare over the phone, and complained about “the lack of hold music.” Twitter replied with a trending hashtag #ezrakleinsholdmusic.

Again, Lizza and Klein are describing real problems with the Healthcare.gov site, and it’s enough to make those of us who wanted a single-payer system say, “I told you so.” All the biggest problems with the ACA have to do with its commitment to working mostly through the existing patchwork of private insurance programs. That’s also the only way it could have gotten through Congress in 2010, though, so saying I told you so is satisfying but politically irrelevant.

And so is much of the liberal hand-wringing. Does anyone think if the website worked perfectly, dishonest conservatives wouldn’t be pointing to other alleged problems? The sight of people from Sen. John McCain to wingnuts on Twitter, who didn’t want the government to help the uninsured get health insurance, now lamenting the trouble those uninsured are having navigating a new website – well, it would be hilarious if it weren’t so sad and corrupt.

That’s why I was actually happy to see the president come out defiantly in his Rose Garden talk, describing the ACA as “not just a website” and listing the many benefits it’s already providing. “The product is good. The healthcare that's being provided is good. People can save significant money … we know that the demand is there. People are rushing to see what’s available. And those who’ve had the chance to enroll are thrilled.” Acknowledging the problems with Healthcare.gov, Obama said, “It’s safe to say nobody is more frustrated by that than I am. I want people to be able to get this great product.”

The president is also frustrated, of course, because people who hate the ACA are heartened by its Web troubles, and he had a word for them, too. “It’s time for folks to stop rooting for its failure, because hardworking middle-class families are rooting for its success.” Later he added, “Nobody is madder than me that the website isn’t working the way it should, which means it’s going to get fixed.”

Since I had heard Obama’s Monday remarks widely previewed as an “apology” for the problems of Healthcare.gov, I was glad to hear him take a defiant tone. Robert Frost famously said “a liberal is a man too broad-minded to take his own side in a quarrel.” That very quality has encouraged the extremism of the modern GOP, culminating in the hostage-taking and extortion we saw this month. Fix the website, Mr. President, but don’t stop talking about what the ACA is getting accomplished while you do.