"Roth Unbound": The author as literary hero, despite a checkered past

Claudia Roth Pierpont glosses over Roth's treatment of his wives, but delivers a terrific celebration of his work 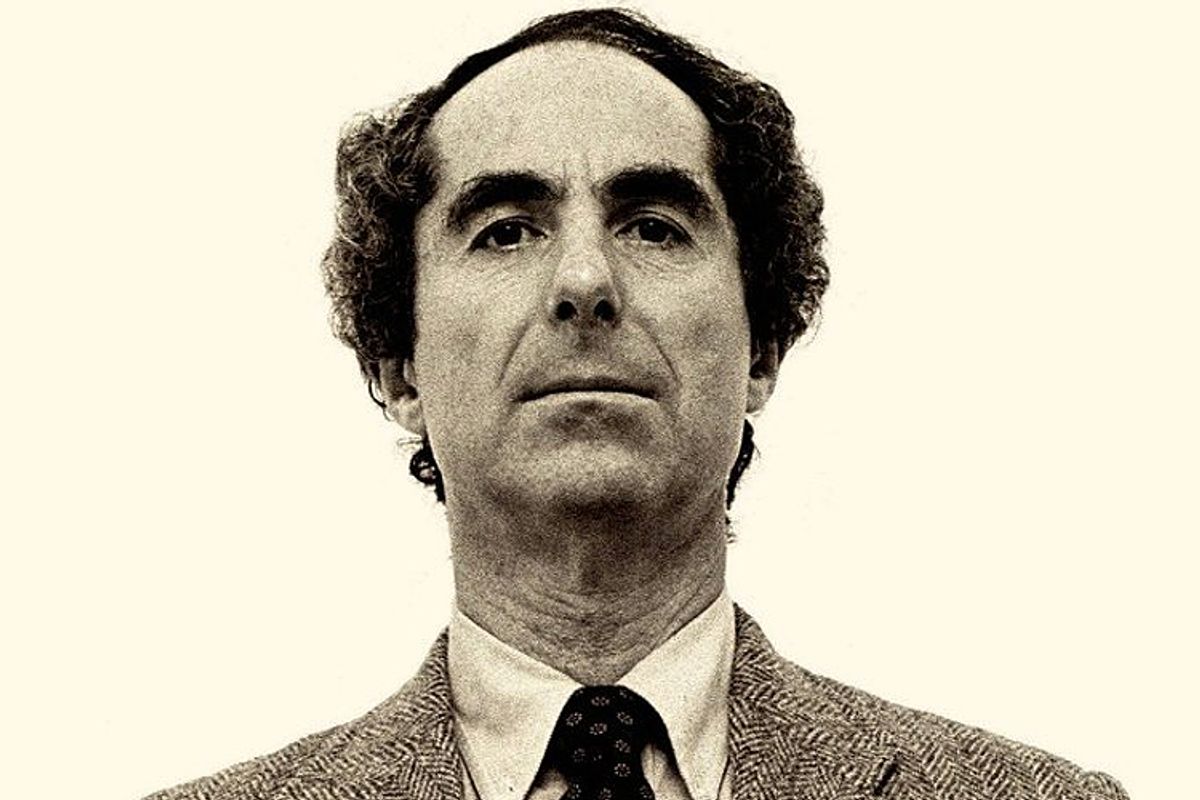 Claudia Roth Pierpont’s "Roth Unbound: A Writer and His Books" marks the beginning of Philip Roth’s attempt to curate his legacy.  A “hybrid” that deviates from the standard form of critical biography by virtue of the fact that Roth sat down with Pierpont for what appears to be months of conversations about every facet of his life and work, Pierpont’s book is the first on Roth to appear since his announced retirement last year, and will no doubt profoundly affect the man’s reputation going forward.

In "Exit Ghost," Roth warned of literary biographers and their “dirt-snooping calling itself research [that] is just about the lowest of literary rackets,” and it’s clear that his extensive work with Pierpont is part of his attempt to preempt the rough treatment that his controversial career is likely to attract from future biographers. (The other part is his current cooperation with Blake Bailey on a full-fledged biography.) Almost from the beginning, Roth has been a self-canonizer. His commentary on his own fiction — collected in "Reading Myself and Others" but also embedded in books like "My Life As A Man," "The Facts," and the Zuckerman books -- has been so rigorously incisive that it can’t help but shape the way we read him, and his restless reshuffling of his collected works into trilogies and tetralogies, into “Zuckerman books” or “Roth books,” betrays an artist deeply invested in structuring readers’ responses to his oeuvre. Not since Henry James — who late in life gathered his entire corpus into the sometimes heavily rewritten New York Edition, each of its 20 volumes introduced by a long preface -- has there been an American writer so hands-on concerned with how history will receive him.

Not that Pierpont is any kind of dupe. (She is not, incidentally, related to Roth, her middle name notwithstanding.) She’s fully immersed in Roth’s 31 books, even-tempered, extraordinarily readable, large-hearted, untethered to critical fashion and “humane” in the way New Yorker writers tend to be in the David Remnick era (Pierpont is a New Yorker staff writer). I’ve read 28 of Roth’s  books, having followed his work since I was a teenager, and Pierpont’s discussion of each book brought back vivid, excitable memories of my encounters with them — and made me want to read the three I’ve missed. She and Roth agreed that “he would not read a single word” of her book “in advance of publication,” and it’s clear that her literary judgments are her own, though it’s just as clear that Pierpont tends to side with Roth on controversial matters — and, goodness, in Roth’s life and career, there have been many.

He was a target for criticism right out of the blocks. His first book, "Goodbye, Columbus," for which he won the National Book Award in 1960, so inflamed the passions of Jewish groups for its satiric portrayals of American Jews just 15 years after the Holocaust that, after a prolonged attack at a Yeshiva University symposium at which he spoke, he vowed to friends that “I’ll never write about Jews again.” Famous last words, of course. A decade later, "Portnoy’s Complaint," which made Roth a literary superstar, incited even greater wrath from his Jewish critics, who argued that Roth was capitalizing on Jewish stereotypes. Hebrew scholar Gershom Scholem wrote that Roth had written “a book for which all anti-Semites have been praying” and that “the Jewish people are going to pay a price.” Such accusations subsided in the coming decades as Roth’s portrayals of Jews became more complex and full-bodied, but then came the flurry of criticism from feminists, typified by Vivian Gornick’s critical blast that “In all the books that follow ['Portnoy’s Complaint'] over the next thirty years, the women are monstrous because for Philip Roth women are monstrous.”

It didn’t help, of course, that Claire Bloom, Roth’s second wife, wrote a devastating memoir portraying Roth as inhumanly cold, irrationally controlling and at times stark-raving mad. It also didn’t help that Roth’s very next book, "I  Married a Communist," nastily (and not altogether artfully) shoehorned a fictional treatment of his marriage into an otherwise powerful novel about McCarthyism, demonstrating for those who didn’t know already that Roth’s work is frequently propelled by nothing so much as anger. (As he admits to Pierpont: “A writer has to be driven crazy to help him to see… A writer needs his poisons… The antidote to his poisons is often a book.”) Pierpont straightforwardly if rather conventionally confronts charges of misogyny in Roth’s work, but she rather gingerly sidesteps Roth’s treatment of his wives. For instance, she has little to say about the cruel way Roth misled Bloom about the content of his novel "Deception," a novel about a novelist named Philip Roth who cheats on his wife (in the original manuscript named Claire) and then claims he wasn’t cheating. When the real-life Bloom read the book, she accused the real-life Roth of cheating in fact, an accusation Roth blithely dismissed as naïvely conflating art with life, though he really did, in fact, have an affair that prompted the writing of the novel.

And then there’s the matter of Roth’s first marriage to Margaret Williams. Williams was by any measure a nightmare — among other things, she tricked Roth into marrying her by claiming she was pregnant, and then buying urine from a pregnant homeless woman to fake the pregnancy test — but when she was killed in an auto accident in 1968, Roth, by then divorced from her but continually harassed by her lawyers, went to her funeral, and according to his own chronicle in "The Facts," looked into the open casket and said to her, “You’re dead and I didn’t have to do it.”  That line is one of the most extraordinary in all of Roth’s work, but Pierpont, who writes an elegant line and tends to smooth out Roth’s rougher edges, prefers not to mention it.

But about Roth’s work she is generally superb. One of the epigraphs to "Operation Shylock," from Kierkagaard, reads: “The whole content of my being shrieks in contradiction against itself,” which could have been appended to almost every book Roth wrote. Internal warfare, endless and lacerating, defines Roth’s work: “the guileless unrealism of our youth” vs. “morality” and earnestness (cf. the epigraph from Thomas Mann in "Letting Go"); the battle enshrined in the very definition of “Portnoy’s Complaint”  (“a disorder in which strongly felt ethical and altruistic impulses are perpetually at war with extreme sexual longings”); the competing “useful fictions” in "My Life As a Man"; the extraordinary and self-erasing rewritings of plot in "The Counterlife"; the bitter argument between Zuckerman and Roth in "The Facts"; the pitiless staging of a boundless, unrenounceable libido raging against the hard cold facts of the grave in "Sabbath’s Theater." Freedom vs. duty, the demands of art vs. the demands of life, the cries of human beings overflowing with animal life incredulously confronting the indefatigable limits of disease, illness, death. Pierpont attends to these central tensions while plotting Roth’s artistic development, from the early moral realism of "Goodbye, Columbus" through "When She Was Good," to the id-driven breakthrough of "Portnoy" and the casting about for a new style in the experiments of the early seventies.

I think Pierpont errs in her underestimation of "My Life As a Man" — it’s the book that not only finally gave Roth a form to deal with his shrieking contradictions but allowed him to put the ghost of Maggie Williams to rest — and she overestimates "The Ghost Writer" (“Like 'The Great Gatsby' and Willa Cather’s 'The Professor’s House,' it is one of our literature’s rare, inevitably brief, inscrutably musical, and nearly perfect books”), but she hits her critical stride just as Roth enters his astonishing middle-late period, the years that give us "Operation Shylock," "Sabbath’s Theater," "American Pastoral" and "The Human Stain," one stunning, surprising classic after another. Her discussions of these books, long meditations that are as illuminating about the rhythms of Roth’s prose as they are about his magisterial presentation of postwar American experience as well as narrative form, feel like a grand appreciative celebration of high literary accomplishment -- like watching Tiger Woods, in easier times, parade down the 18th green on his way toward a Master’s championship.

Most critical biographies of American writers don’t have the luxury to surge in appreciation toward the end: How many Americans, other than James (and maybe Pynchon?) have such great late periods to celebrate? Even the late novellas — certainly "Everyman" and "Exit Ghost" — have a distilled mastery that show none of the fall-off that’s apparent in, say, Bellow’s late novellas. The reason that Roth stuck with short forms in his last books and then decided to stop writing altogether is suggested in "Exit Ghost" — there Zuckerman’s memory is so bad that he finds it increasingly tough to keep the details of a fictional narrative in his head, and Roth underlines this with Pierpont. Speaking of his disappointment with Bellow’s "Ravelstein," he says “It’s hard to write a book at 84. It’s hard to remember from day to day what you’ve done.” But having stopped writing doesn’t mean Roth is through. As terrific and independent a literary critic as Pierpont is, Roth has got his prints all over this book: In the end it feels like a joint effort to navigate the stormy seas of literary reputation and bring Roth home to the port of The American Canon. It certainly convinces me.