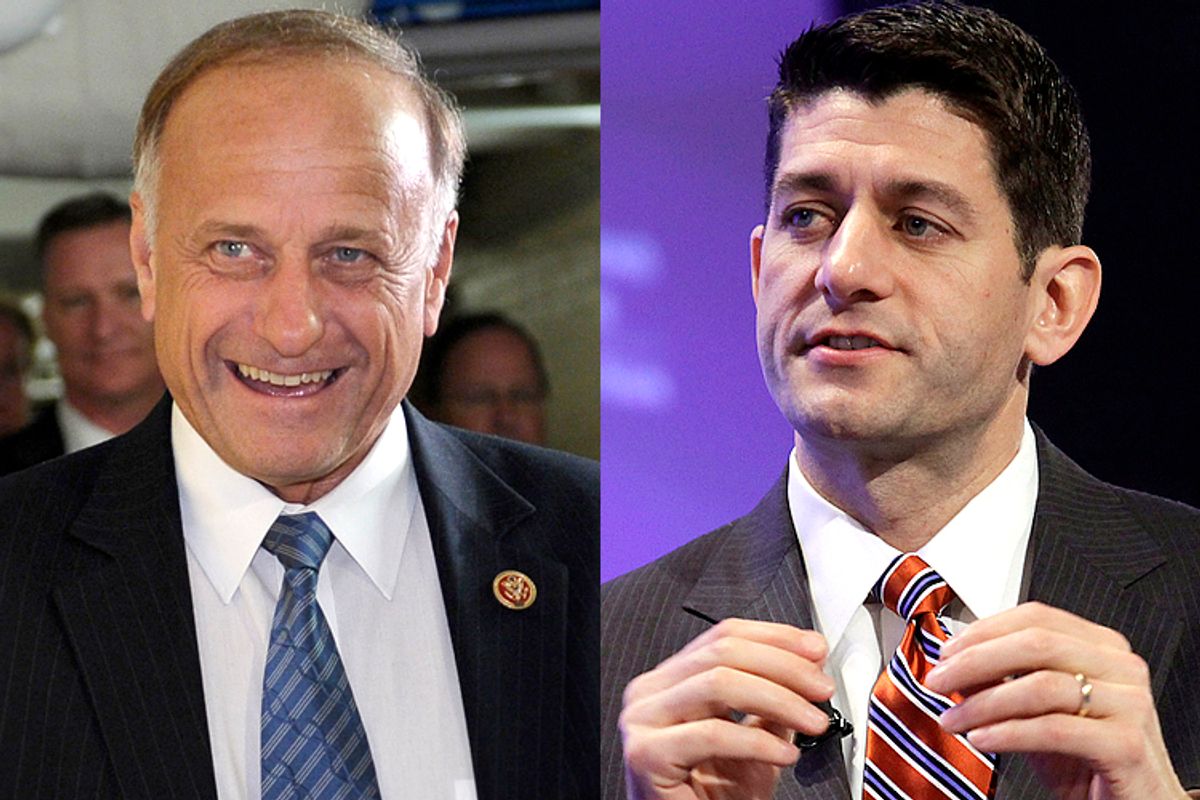 Last week's shutdown had many faces. First, of course, was the smug mug of Tea Party leader Ted Cruz. Then, there were the angry veterans trying to get into the D.C. World War II memorial, as well as the scorned Park Ranger, berated by a Tea Party Congressman for keeping the gates closed. John Boehner and his sad, impotent eyes also got plenty of television play-time, as did Sarah Palin, the guy mowing the White House lawn gratis, and the Tea Partier waving a Confederate flag in front of our president’s home. And somewhere in the mix have been the more than 300 people across 17 states infected with salmonella originating from California’s Foster Farms chicken.

To many, this salmonella outbreak was just another casualty of the government shutdown. With the FDA forced to suspend all of its routine safety inspections – about 167 each week – it seemed inevitable that some sort of terrible food-inspection-related calamity would occur. As one POLITICO headline put it, “Government shutdown worst-case scenario realized: Salmonella outbreak.” This version of events highlights the CDC’s and the USDA’s shutdownsized staff, noting that in the wake of the outbreak the CDC was filling out some of its ranks again despite the problems in Congress. And for the poultry industry, as well as the members of Congress doing what they can to support it (there are formal “Chicken Caucuses” in both the House and the Senate), that sounds like the perfect story to tell.

But foodborne illnesses were around long before the shutdown was even a twinkle in Michele Bachmann’s eye. Recent highlights include the 2002 Pilgrim’s Pride Foods Listeria outbreak, spread through sliceable turkey meat, leading to eight deaths and three stillbirths across seven states; the 2006 FDA-issued nationwide recall of bagged spinach after an E. coli outbreak spread across 26 states; and the November 2012 FDA closure of the country’s largest organic peanut butter processor after it was linked to a salmonella outbreak that sickened 41 people in 20 states. Blaming the Foster Farms salmonella outbreak on the shutdown alone belies a much bigger problem, one with much bigger implications: Our food system, thanks to decades of deregulation, lax enforcement and underfunding, is always vulnerable to the threat of foodborne illnesses. And the GOP, despite including the FDA in their piecemeal funding attempt, bears much of the blame.

The basic gist of Foster Farms response has been, as food-related outbreak lawyer extraordinaire Bill Marler summed it up, “Shit Happens.” But as Marion Nestle points out, a close reading of the Oct. 9 Foster Farms response to the outbreak begins to tell another story. “Consumers should know that as recently as Oct. 8, USDA-FSIS publicly assured the safety of our chicken… There is no recall in effect and FSIS [Food Safety and Inspection Service] continues to inspect our poultry on a daily basis, certifying it as Grade A wholesome.” The letter continues, “According to the CDC, ‘It is not unusual for raw poultry from any producer to have Salmonella bacteria. CDC and USDA-FSIS recommend consumers follow food safety tips to prevent Salmonella infection from raw poultry…'”

Take a minute and read those statements again. According to Foster Farms, our government assures the safety of food we know to be tainted with salmonella. They are saying that salmonella is no big deal. Umm… what? Not only is salmonella-contaminated chicken legal to sell, it’s also apparently “wholesome.” (Foster Farms did not respond to Salon’s request for comment.)

The reason for this disturbing state of affairs is that the USDA refuses to declare salmonella an “adulterant,” even though under the definitions in both the Federal Meat Inspection Act and the Poultry Products Inspection Act, meat or poultry is adulterated “if it bears or contains any poisonous or deleterious substance which may render it injurious to health.” So what’s the problem? Michele Simon asked the same question a few years ago: “Sounds pretty straightforward: Salmonella a poisonous substance? Check. Salmonella injurious to health? Check again. But somehow in the tangled web of Washington D.C. clearly written laws are never that simple.”

Simon traces the problem to a 1999 case in which an appeals court sided with the beef industry, holding that because the meat was contaminated upon entry into the processing plant, the USDA couldn’t declare it adulterated. The Center for Science in the Public Interest, meanwhile, blames the USDA itself for not responding to its 2011 petition, in response to a Cargill salmonella outbreak, urging that salmonella be declared an adulterant. “If USDA has already approved the CSPI petition, it might have prevented that contaminated chicken from ever getting on the market. Make no mistake: this outbreak was preventable.” Including the FDA on his chicken shit list, Mark Bittman added the permissible use of prophylactic antibiotics to the causes underlying the outbreak.

If only it was that simple: According to a 2004 Government Accountability Office report, “The safety and quality of the U.S. food supply is governed by a highly complex system that is based on more than 30 laws and administered by 12 agencies.” Thirty laws, 12 agencies, and outbreaks are still a normal part of life? Seems like a perfect opportunity for a small-government advocate to suggest a review, consolidation and upgrading of those laws. But, nah. The Republicans would rather just toss them out the window entirely.

Paul Ryan, who at one point in the shutdown was the GOP’s Great White Hope, voted against the bipartisan supported Food Safety Modernization Act in 2010. He also proposed a budget with running mate Mitt Romney that would’ve gutted the FDA’s funding by almost half. (Romney, meanwhile, wanted to shift the food inspection responsibility to the industry instead of government.) Ryan was not alone. In 2011, House Republicans argued that the food supply was safe enough, cutting funds from both the USDA and the FDA inspection programs. While Democrats certainly deserve some of the blame for passing recent proposals to cut the number of poultry inspectors on kill-lines – a change that according to Food Safety News could “not only impair food safety, but may also send more defective or unappealing chicken to consumer’s plates” – the amendments originated with Republican Congressman Jack Kingston of Georgia. (Maybe it’s just a coincidence that since 2010, the Poultry & Eggs industry has financed his campaigns to the tune of more than $82,000.) And as Salon recently reported, Tea Party leader Steve King wants to make sure that state governments can’t step in where the federal government fails. His King Amendment to the Farm Bill would restrict states from legislating essentially anything related to the production of “agricultural products.” Salmonella for everyone!

But it’s not just a legislation or funding problem. Tom Corbo of Food and Water Watch sees more at work. “The way that FSIS is currently mishandling the Foster Farms outbreak is an example of how that agency is bending over backwards to the industry,” he told Salon, citing several former USDA officials who have since gone to work for the companies it used to police. That list included, for example, William James, formerly of the USDA-FSIS and now a proponent of Kingston's poultry-slaughter amendment.

So while Foster Farms may want you to see its chicken on the shelves as a sign that everything is fine, fine, fine, it is really an indicator of just the opposite.